what is it that gets inside your heads?

So, right at the top, the Sherman Oaks Mall featured as the Ridgemont Mall is the same mall featured briefly in Commando. In other Groundhog Day Project news, a guy emailed me today for my help in identifying Sandy Maschmeyer (Laraine, aka the French Maid date) and Angela Paton (Florence "Mrs" Lancaster) from their high school yearbook photos. I kind of like being a guy people can ask about Groundhog Day related stuff.

But anyway, Fast Times at Ridgemont High. Seven minutes in and we've already got two montage bits with songs playing over them. There's already talk of underage sex, brief nudity (albeit just in some locker photos), and a whole lot of coupling and mating-type displays going on. And, like Porky's, the main cast is older than their characters. They have to be, of course, because of some of the subject matter; it just makes production easier.

It's been a while since I've watched this movie. And, I think I mentioned yesterday that I did not see this movie in the theater.

(Why did the students all sniff the schedule Mr. Hand passed out?)

This movie came out the same weekend as Friday the 13th Part III... but I didn't see that in the theater either. I wouldn't see any Friday the 13th films in the theater until Jason Takes Manhattan, which is a little sad in retrospect. In theaters when Fast Times at Ridgemont High came out were E.T.: The Extra-Terrestrial (saw that in the theater, but probably around its first weekend, nine weeks earlier), An Officer and a Gentleman (which I have no memory of seeing in the theater, but since it was on one my family's early videotapes, I saw it many times as a kid), The Best Little Whorehouse in Texas (never seen it all the way through), Star Wars in re-release (seen it many, many times), Things Are Tough All Over (which I don't think I've heard of before tonight, looking at the box office), The World According to Garp (which I think I may have seen in the theater, but I'm not sure. I know I saw it long before I got much of it), Night Shift (wouldn't see that until years later), Rocky III (saw in the theater probably 11 weeks earlier on its opening weekend), Young Doctors in Love (never heard of it), Poltergeist (which I wouldn't see until sometime on television a while later) and The Pirate Movie (which, for some reason I never imagined was ever in theaters; it just seems like such a home video movie).

The point is--this movie was a little before my time, so to speak. I mean, sure, I was already seeing movies plenty, but not some R-rated films were probably a bit too much outside my parents' interests so I would not benefit from getting dragged along. 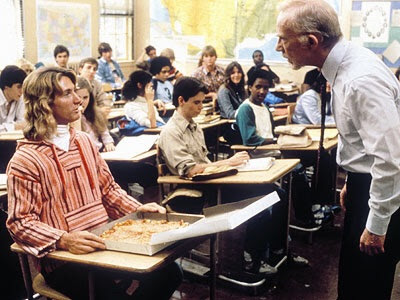 Fast Times at Ridgemont High is an interesting beast. Where Porky's makes an effort to, well, have fun almost constantly--the fights between Tim and his father being the only real exceptions--Fast Times at Ridgemont High makes no effort to remain fun. A lot of the movie is funny, sure, but as Roger Ebert points out in his review, stuff like Stacy's sex scenes have a certain realism to them that makes them, well, not so fun. "Whatever happened to upbeat sex?" Ebert asks. He doesn't care for the film.

(Mark's an idiot. Jennifer Jason Leigh changes out of her dress after letting you in her house, and her parents are gone, and she lets you kiss her, you do not get all nervous and make an excuse to leave.)

Anyway, Ebert is usually my go to reviewer, as regular readers of this blog would know. And, he's got something useful to say about this film--I'll get into that another day this week. (By the way, he writes, "If this movie had been directed by a man, I'd call it sexist.") Thing is, I don't know if his dislike of this film is useful to me on Day One. Conservative political commentator Debbie Schlussel's, on the other hand... Her dislike of the film is more interesting to me coming off of a week with Porky's.

That film, though in theaters around the same time, is set three decades earlier. That film, though preoccupied with sex, is quite innocent about it all. It's just so damn playful that it's hard to be offended by much of it. But, Fast Times at Ridgemont High--Schlussel tells us, "While Sean Penn's turn as the potheaded idiot, Jeff Spicoli, was funny, the other issues and themes the movie delved into were shocking in that more innocent time." On the one hand, yeah, sure, but that's kind of the fucking point. On the other hand, how dare a rated-R film delve into serious subject matter. "Teen sex, abortion, drug-dealing, and other such behaviors were glamorized..." Yeah, I gotta cut you off, Schlussel, because if we can trust Ebert's dislike of the film, I don't think we can quite accept yours; I mean, either the sex was glamorized or it was "downbeat humiliation."

(Well, it could be both, but that would be a very different kind of a movie.)

Sclussel's argument is that Fast Times at Ridgemont High "didn't contribute positively to America's future. Instead, it helped contribute to glamorizing teen sex and drug use. And the results 30 years later aren't anything to brag about." Realistically, though, a film like this, with frank conversation about sex and, as Ebert points out, realistic depictions thereof, comes along not to spur an increase in teen sex or drug use but because that is already happening in reality. In my Smash Monogamy: Sexual Revolution to Political Revolution, I referred to the "triumph over human biology" that came with the pill and how it "granted youth greater degrees of physical freedom, which frightened older generations" (p. 4).

Schlussel would be a bit of a straw man if her opinions didn't sound so much like so many others. "In 'Fast Times,'" Schlussel argues, "sex was seen as something casual with a quick abortion to get rid of the consequences." I think she saw a different movie than I'm watching right now. The casualness of the sex is depicted as a negative, the abortion is accepted, sure, ut it is not depicted as a positive. And, really, this film seems pretty conservative to me. While Spicoli skates by, Brad gets a series of jobs to make money. Stacy and Linda retain their pizza jobs throughout the year depicted in the film, as does Mark with his movie theater job. Damone is portrayed pretty clearly as an asshole. Mr. Hand is not the enemy. And, in the end, life goes on. There is no glamorized sex--hell, even the famous poolside scene with Phoebe Cates ends in the discomfort of Brad being caught masturbating. It makes for a laugh, but that is not glamorous.

The movie just ended so I'll leave you with one more thing. Another bit from Schlussel. She points out that Phoebe Cates retired from acting to rase a family. "She went topless in a fantasy scene in the movie," Schlussel writes. "Wonder how she'll explain that to her kids." Assuming she ever had to explain that to her kids, perhaps she can point out that a) it was a paying job and it's good to be a responsible human being and in the context of our modern society that means holding down a job and making money and b) there is nothing wrong with a little nudity in a film anymore than there is playing an asshole like Damone. It's called acting, and as long as real people in the real world take off their clothes from time to time, so should the people on the big screen.

Okay, one more thing. Schlussel ends her thing by saying, "Sadly, those involved with the making of the movie think they actually did something to be proud of and remember. The longlasting consequences are something America will never forget... and from which it will never come back." Going backward, I'll say to the last part, if our society worked in such a way that a single film could ever transform the way a generation lives, we'd have far worse problems than a little teenage sex or drug use. If we accept the idea that over the past three decades such things have grown more common--I'd have to check some statistics to be sure--we should probably look at the decades before Fast Times at Ridgemont High as well and see that trends don't come from nowhere, and society does not turn on a dime. And, the makers of a film that speaks frankly about sex and deals responsibly with its consequences and does not talk down to the real-life teens who could use a film like this absolutely should be proud.

That some parts of this film are hilarious to boot--that's just a bonus.