do you realize the shit storm that is about to hit us?

#OscarsSoWhite continues. Jada Pinkett Smith (married of course to Will Smith, who is one of the oft cited actors of colour who could/should have been nominated for an Oscar this year) put out a few tweets and then a video about boycotting the Oscars. Spike Lee joined her. So did Michael Moore. One person that specifically spoke out against Jada was her husband's old costar from The Fresh Prince of Bel Air, Janet Hubert. But, she had to go and start with a somewhat sexist--

I'm getting ahead of myself.

How about Jada's tweets first, set some context beyond just the fact that in the past ten years worth of acting nominations (just to narrow it down to one field), the Academy had only nominated 26 people of colour and 174 white people. Colourless people, if you will. Because the Academy was last reported as being 94% white and 54% over the age of 60 (with an average age of about 62), so this is an organization of, you know, old white men.

At the Oscars...people of color are always welcomed to give out awards...even entertain, (pt. 1)

But we are rarely recognized for our artistic accomplishments. Should people of color refrain from participating all together? (pt 2)

People can only treat us in the way in which we allow. With much respect in the midst of deep disappointment. J (pt 3)

Lots of folks responded in lots of ways. I won't get into all of it. I've got a dozen or so articles bookmarked (and will reference some below) and several printed out. Google it, you'll find plenty. (You'll also find Jada's followup video and the Janet Hubert video referenced below.)

But, I wanted to focus in on one response for the moment--Janet Hubert.

Tonight, I've got The Martian playing, by the way. I never really wrote about it because I was busy dealing with horror films that month, Hellraiser that day in particular. I might not say much about it today. It does include some actors of colour in notable roles, notably Oscar nominee from two years ago Chiwetel Ejiofor. Lot of white folks, though. I mentioned yesterday why The Martian is an easy nomination for Best Picture. Given today's topic, I'd venture that since acting nominees are picked by actors, they were impressed (as they were with Leonardo DiCaprio, surely) how Matt Damon has to carry so much of the film while utterly alone in his scenes. 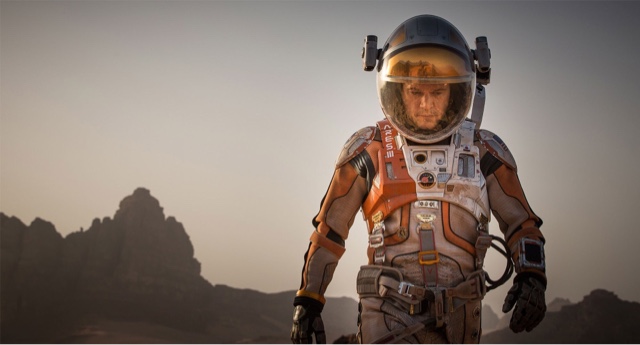 But, I was talking about Janet Hubert and her sexist opener: "First of all, Miss Thing, does your man not have a mouth of his own with which to speak?" At least, I think it's a bit sexist to a) call Jada "Miss Thing", b) to suggest Jada cannot have a voice of her own, or c) even (however accurate it may or may not be) to suggest that Jada must only be concerned because her husband was not nominated. And, that's before Hubert proceeds to dismiss the entire subject because there are more important things going on in the world. That is one line of argument I just don't like.

Like Kevin Fallon's Daily Beast piece--"Another All-White Oscars? This Is Bullshit."--in which Fallon dismisses Trumbo because it was (meant to be read sarcastically, of course) "a movie about important things like White Movie Writers Who Have Been Mistreated and not something like African doctors attempting to change the world's minds about the value of an entertainment institution that could possibly be killing people." That's Concussion, if you don't know. But, if you don't know that, I'm not sure what you're doing here reading my blog. You are welcome here. I just don't know what you are doing. Thing is, yeah, chronic traumatic encephalopathy destroys lives, takes lives. Or, I hope, took, past tense. So did the Hollywood Blacklist destroy lives, take lives. Fewer lives, I'm pretty sure, but I don't necessarily operate under the notion that it should be a numbers game when it comes to lives at stake. A story about a single life at stake--say, The Martian or The Revenant (mostly)--is just as valid a dramatic story worth telling. Hell, how about a story like Brooklyn? No one's life is on the line--though a character with very little screentime does die, for the record--only, well, living. Love. Happiness. Even I, yesterday, referred to the topics of some movies as "important" but really, I think of importance as more of a tiebreaker when movies are equally(-ish), for lack of a better term, good.

My point is, yeah, there are more "important" things going on, but so what. Life still happens, day-to-day. We cannot all just be stuck on important things all the time.

I came into this week with the Oscars prepared, among other things, to get into a serious critique of one piece in particular--Mary McNamara's Los Angeles Times piece, "Oscars 2016: It's time for Hollywood to stop defining great drama as white men battling adversity." Seriously, if you've been with this blog since year one, and you were here for the many days I spent picking apart Benesh's (2011) dissertation on Groundhog Day you could imagine. Many handwritten notes, from simple nitpicks about here definition of "recent" to a serious critique of her characterization of pretty much every one of the eight nominees for Best Picture. Hell I might still get into some of it, but that will be another day. This entry has gotten long enough.

And, I didn't even get to tell you the actual numbers game of how the acting nominees get picked. Short version: it's a variation on what I explained yesterday about best picture but there are (probably) just shy of 1400 actors (1377, taking a Los Angeles Times calculation in 2012 that the Academy is 22% actors and the current membership is reportedly 6261) in the Academy's acting branch. So, take your total number of potential ballots down to 1377. Divide by 6 because there can only be up to 5 nominees for any particular acting category. So, the "magic number" of ballots an actor or actress needs to be a nominee is 230. This means, that the first nominee needs (if the system works efficiently) to be the #1 choice on 230 ballots. (And, I'll reiterate the nifty little possibility that a particular actor or actress could be the #2 on every single ballot that gets turned in (1377, if everybody votes) and still not be nominated if the #1 choices are evenly distributed.

Bring this back around to an organization that is 94% white, and 54% over the age of 60, and you can probably imagine why the #1 choice on many ballots just will not be a person of colour unless a particular film has gotten a major push, is (probably) popular, and (often) deals in an "important" subject. On that last one of course, Manohla Dargis makes a good point in the New York Times--the mass of old white men in the Academy didn't grow up listening to the likes of N.W.A., so they just cannot relate to Straight Outta Compton. Hell, I was 12 when that album came out and I don't relate to the group or the music, necessarily, but I absolutely understand the messages of both and of the film. It was not one of my favorite films this past year but as the Oscar nomination day approached I rather hoped the Academy would nominate the film, not because it's important that we nominated films with "black themes" and black actors (though that is important) but because the film can be and has been an inspiration for its audience. It's, you know, important.