it raises all sorts of philosophical-type questions

(A note before I get going: I finished yesterday's entry before the film was over and even before Craig was kicked out of Malkovich after months of living inside him. I mentioned the piece of wood Craig uses but thought it just some random piece of wood. It is not. I noticed it was the edge of a frame when he held it up alongside that New Jersey Turnpike last night and I just confirmed what frame it was tonight as the earlier scene came again. The board is not some random piece of wood. It is the right side of the door frame outside the portal. It comes off the frame when Craig pulls away the board that has presumably been nailed in place over the whole door and frame to hide them.

The first thing Craig does when he finds the portal is break it. I don't know if that means anything, but I find it interesting.)

I'm reading Dan Hobart's metaphilm review of Being John Malkovich and it's the usual stuff--the film is about "living your life vicariously through other people" and all that. There's some info about the original script--if you know the film, the Flemmer of the Mertin Flemmer building is actually the devil (in the film, I almost wonder if Maxine is the devil) and he's involved with Lester and his ilk. The film makes everything a bit more arbitrary (especially if we dismiss the story about Mertin and the woman he marries, as Maxine dismisses it). But that doesn't make it pointless, or as Hobart terms it, "heartless." Seriously, he calls Being John Malkovich "one of the most heartless films" he's ever seen. I'm not sure how to take that.

I know how to take that, and I take it to mean this is a film lacking in feeling, lacking in humanity. Other parts of Hobart's review suggest that he thinks otherwise, but how else can "heartless" be understood?

(Returning to Maxine, she wears solid white when Craig first meets her. Solid black when he guesses her name and convinces her to go out with him (and while out with him). White Maxine was indifferent to Craig. Black is more like a deliberately resistant temptress, coming on to Craig even as she rejects him. I wonder if this will hold up as some sort of devil on one shoulder, angel on the other sort of thing.)

Whether I'm reading Hobart correctly or not, I think that Being John Malkovich has a lot of heart. Take that moment when puppet Craig in the opening dance looks up and sees human Craig and then dances his dance of despair. Take the conversation between puppet Craig and puppet Maxine about wanting to be someone else. This is not just a metaphor for the moviegoing experience or our parasocial relationships with celebrities. This is about how when our own lives are not going as we want them to go, we would rather imagine packing it all up and becoming someone entirely different than to fix what's wrong. 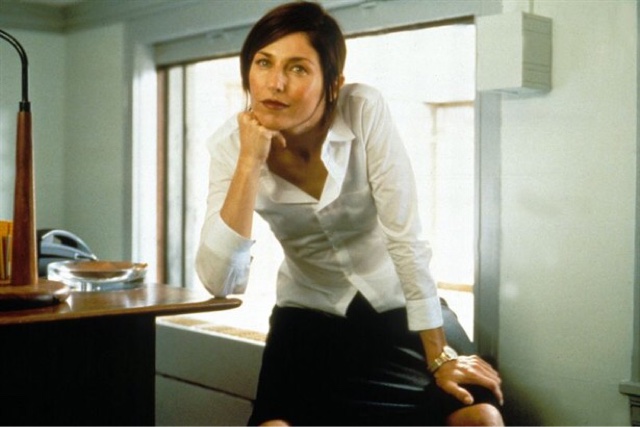 (Talking about "the puppeteer" telling her that he loved her (and then when Craig tells her about the portal), Maxine wears white and black. And later on the phone it is her idea to exploit the portal for money.)

We want the quick fix. We want the fantasy. All too often, it's easier to watch reality television than to live. Which is an idea both amazing and disgusting. That too does not mean that we lack heart.

(Placing the ad, and meeting Lotte, Maxine wears grey over black. Maybe it is not about her wearing black or white in any given circumstance but that she just doesn't wear colour. Everything is black or white for Maxine.)

I'm not sure I'm making the point I mean to make. Think about it like this: wanting to be someone else does not make you not you. I have contended all along with this blog that watching movies can help you become you. It is not about change. It is not about transformation into something new. It is about filling out the gaps in what is already your self.

Malkovich recites into his tape recorder (the second time Lotte is inside him) a monologue from Chekhov's The Cherry Orchard. (In a copy of the script online, he reads from Awake and Sing by Clifford Odets.)

(On her initial date with Malkovich, Maxine wears black again but with a bright red skirt. Perhaps I am grasping at straws.)

He is cut off before he gets to what I see as the important line at the end: "But wherever I have been, every minute, day and night, my should has been full of mysterious anticipations. I feel the approach of happiness..."

(At the apartment of Craig and Lotte, Maxine wears black with a red blouse open over it.)

Earlier in the monologue, before what we hear from Malkovich, Trophimof asks Anya to think about how her "ancestors were serf-owners, owners of living souls. Do not human spirits look out at you from every tree in the oral card, from every leaf and every stem?" Do you not hear human voices?"

(Next date with Malkovich/Lotte, Maxine wears all black.)

He's talking about the orchard like a haunted thing, but I imagine the line as being about anything really. About trees, about houses, about books, about movies. Not to imply some pantheist notion about everything in the world having life in it, but that everything we experience, or rather our experience of every thing can be like an echo of every human voice, of every other experience...

And, maybe that's the point to Being John Malkovich. Or another point on top of the rest, anyway.

That every experience is about something like empathy will other humans. No experience means anything but for the opportunity to share it with someone else. I don't mean that we all need to be coupled to live. But, that the things that we keep trapped away inside our heads just don't matter as much as the things we tell to others.

(White again when she comes to Malkovich in the theater and has sex with Malkovich/Craig.)

Just look at Floris (Mary Kay Place) and her inability to communicate clearly with anyone else or the neighbor that exists only as a disembodied voice telling Craig and Lotte and their menagerie of animals to shut up. Or the parrot that can only repeat; it says "shut up" and "sorry, honey" which it must hear often, but Lotte has also recently taught it to say, "Help, she's locking me in a cage." This is only training. Not actual expression...

Of course, in a film about puppetry and control, maybe one is the the same as the other.

(Layers of black when Lotte tells her that Craig was in Malkovich.)

(All black when she accompanies Malkovich to see his agent. Malkovich wears grey over black.)