good for you to get out of your head

The thing that really fascinates me about Charlie Kaufman sometimes is how mundane his early writing credits are. A couple episodes of Get a Life--not the most normal of sitcoms but not as strange as Kaufman's films--a sketch comedy show that I cannot remember if I ever watched (The Edge), eight episodes of The Dana Carvey Show, two of Ned and Stacey, and then Being John Malkovich. Like suddenly he had free reign and he embraced it.

(Adaptation. was supposed to be Kaufman coming back around to normal and he both fails and succeeds at this.) 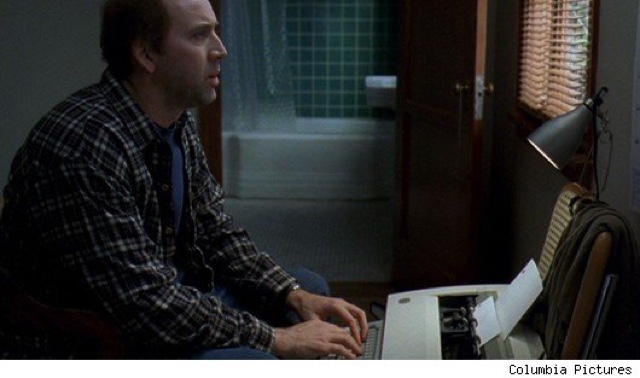 I don't know if I ever had that moment when I was writing fiction regularly. I think I actually had the opposite in a way. I started by writing fiction with bits of the supernatural in it. My first novel--the writing of which is awful, but which I would love to rewrite now if I had the time--started as an attempt to take the idea of the virgin sacrifice seriously in a modern context. I think I was picturing the stone sacrificial table in House 2, but in the end, The Man with the Holes in His Hands never got that far. No table, I don't think. It's been a while since I've looked at the book and the last time I did, I barley made it through the first chapter. The interesting thing then was that what had taken pages and pages in the original draft (written almost two decades ago, now) could be covered in a page or two if I rewrote it. Main character Jacob (the title character) wakes up from a dream and his hands are bleeding. Thing is, I establish later that this is a rather regular occurrence for him but I wrote that opening chapter like he was freaking out over it and didn't know what was happening. But, this was normal to him. I think I'd even read Orson Scott Card's How to Write Science Fiction and Fantasy by then and should have known better; he's got a great anecdote about starting this story about this guy who dies and is resurrected on a regular basis. His initial impulse was to deal with the origin story, the first time this guy dies and discovered he would resurrect. Then he hit on the better opening, in which this character dies twice on the way some place and it happens inside a few sentences on the first page of the story, no explanation; it just is. This is what I would do if I rewrote that first novel now; Jacob would wake up with his hands bleeding, throw back his covers, swing his legs out of the bed and then shuffle his way to the restroom where he's got a good supply of bandages waiting because this is common. He wouldn't freak out. He would just wrap up his hands then shuffle back to his bed and go back to sleep. No big deal.

But that wasn't my point. Second novel, Bridges was mostly realistic fiction but it hinged on the presence of a ghost and a supernatural link between three time periods. Third one, Grazers, or Into the Mouth of the River of Time embraced the supernatural elements, including references to aliens, Bigfoot, demons, Native American gods, and a bunch of other things. Structurally, it was a mess. But, it had some good characters, a few that came from a screenplay I had written a while before called Rats, a few who would survive into supporting or lead roles in other stories of mine later. Everything I was writing at this point was connected, the short stories, the screenplays (well, two of them), the novels. I was aping Stephen King in this regard. A lot of my writing style came from him as well. Some of that style survives still in the way I write in this blog--

(Like when I interrupt one thought with another in a parenthetical like this--not saying King invented it but I stole it from him.)

--and the way I fit quotations into my academic work as well. Everything was tied to the supernatural, the two screenplays I had finished at that point were horror films. But, within the stories, within the novels, I kept taking time out for more serious stuff. An example--from a later novel, though--would be a debate about government in the middle of my first fantasy novel, The Empress of Time. My writing was better by then, but a little excessive. By the time I wrote The Empress of Time, I'd written a children's novel, two sprawling supernatural novels.

Then came my turn--that one opposite to Kaufman's that I mentioned above. I wrote a third screenplay and while it did involve a ghost, the story was in no way driven by that ghost, nor did it have the plot of a supernatural story. It was structured like a revenge plot, but a little discordant with its flow of time. In terms of its actual content, though, it spiraled in around a married couple dealing with the murder of their daughter. Emotionally more than vengefully. Despite the ghost--which was actually more of a figment of one character's imagination anyway, the story embraced the painful mundanity of living with grief and a broken relationship. It was called The Evolution of Grace.

My next screenplay introduced the fantasy world that would come into my novels later, but rather than doing the obvious thing of dragging regular folks into a fantasy world (though I would do that in The Empress of Time) I dragged a fantasy character into the "real" world and then into the real world. It could have been my weirdest story but I anchored it in the real stuff, some relationship drama. It was called Fugue. I've mentioned it in this blog before because of its ending, how the story came out of the trappings of the screen.

Next screenplay was entirely set in the real world, and by then I'd also written the novels I mentioned in this blog a couple weeks ago--Seeing Her Naked, Twice Into the Same River and Clubhouse Blues. While the middle one in this trilogy includes a ghost and an angel, they might just be figments of a delusional narrator's imagination. The trilogy was about putting the supernatural stuff behind me. But, with Twice Into the Same River, I got desperate, clung to old writing habits when my life was going badly.

I would return to fantasy and the supernatural but either by my overall page count or because writing stories set in the real world, my writing style had changed and my writing ability had changed. Clubhouse Blues is probably the best novel I've written, and I should make some effort to get it published again. The sequel to The Empress of Time--Lion Horse Tree--was a much better novel than its predecessor. It could really use an edit, though; it's a little too long and rambly in parts. The thing is, writing about real things exercised something inside me that writing horror and fantasy did not. It made me a better writer.

A few years ago I lost the momentum on the fantasy stories and the shared universe I had put together over the years. I managed a few new stories. They were very short but they were also pretty damn good. (You can read them if you like: Masks, Feelings, Maurice the Turtle Who Wanted to Be Human and An Offer of Violence.)

And this blog began, and grad school began. And, I haven't really written fiction in a while.

I'm stuck in the real world.

If you can call movies that.