i don't know why i make it so complicated

There is a person hidden in the wallpaper in Caden's kitchen in Synecdoche, New York. 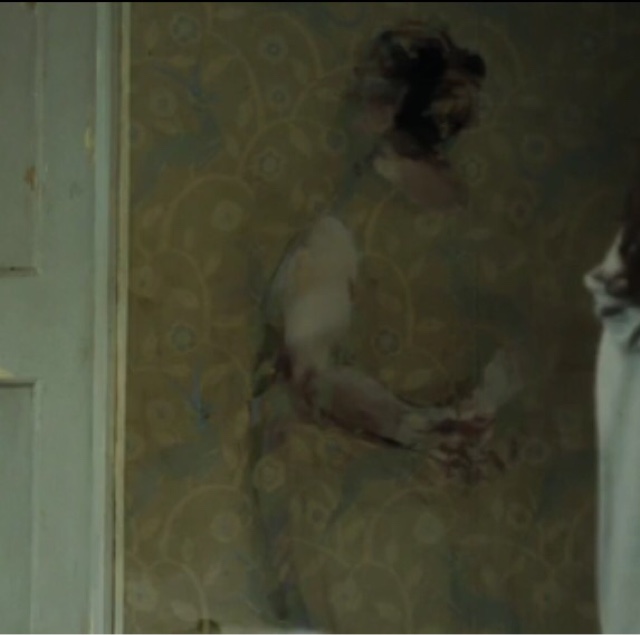 There are many reasons that I sometimes avoid certain films in this blog. For example, on the one hand, I would love to really break down how the differences between the multiple versions of Blade Runner in my boxset really create quite different (or maybe not different at all) films. On the other hand, however, I think I am afraid that so much has already been written on the subject that I might have nothing useful to add to the discourse... Which is somewhat contradictory of the ideas I write about here in this blog sometimes, and notions that are central to the master's thesis I've been putting together for far too long. That idea, simply: any addition to the discourse can be useful. Can be? Is.

There are also films--like Kiss Kiss Bang Bang that I watched a few times recently--that I enjoy a little too much and end up just watching rather than writing about.

Charlie Kaufman films fit both categories. I find myself sitting and watching, wishing to write some brilliant treatise on the way Synecdoche, New York breaks down the way we experience self and the way we experience the world around us... I notice something new--like when Caden called Adele, she called him Ellen yet we haven't met Ellen yet, then he has a seizure and calls 911 and the operator calls him "ma'am" and, if you've seen the film, you'll know that at the end of the film/his play/his life Caden will be replaced by Ellen, and along the way he will replace her. And, I want to say something profound about the interchangeability of the individual, how none of us is unique. You know, despite the (seemingly) opposite notion put forth in Anomalisa. And, despite parents and teachers and, well, everyone, telling us we're unique and special and if we just put in enough effort we can do anything. None of us have the money (Caden gets an apparently infinitely large grant) and the time to play God, to accomplish everything we want to accomplish. As Death says in Sandman #8, "You lived what anybody gets, Bernie. You got a lifetime." 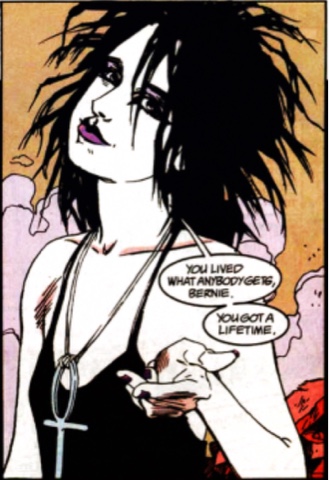 But, no shit. Right? Live for the moment because eventually you're going to die. That idea stopped being profound about a million years before a human was first able to articulate it. Yet we don't all get it. I mean, yeah, we cannot all just take photographs of lutefisk to prove the nothingness of being (and we probably don't all get that reference). The point is, we can't all just do what we want because the world has gotten far too complex and complicated and somebody needs to do the boring work, sit in an office and enter data or throw some potatoes into oil so other folks can get fat...

I feel like Michael Stone right now, when he can't get through his speech at the end of Anomalisa. "The world is falling apart!" and all that.

The world is still the world. The people are still the people. Terrorists on the other side of the world, or just in the next state--doesn't matter to me because tomorrow I've got to do some reading for class and maybe some coding for my thesis and try not to reflect on the, as Caden describes it, "murky, cowardly depths of my lonely, fucked up being."

There are plenty of good things, too. Hell, the reading for class is actually something I'm looking forward to. But, it is so much easier to express something negative than positive.

Which is fucked up if you think about it.

In his review of Synecdoche, New York, Roger Ebert describes Caden as having "all the hangups and self-pity, all the grandiosity and sniffles, all the arrogance and fear, typical of his job. In other words, he could be me. He could be you. The job, the name, the race, the gender, the environment, all change. The human remains pretty much the same."

This film is too depressing for a mass audience, of course. The mass audience needs something like Groundhog Day, a comedy--not that this film is not funny--that offers up a central character who is charming and funny, not this drab, depressing and depressed, hypochondriac. The mass audience wants something simpler. We don't need to be faced with our own mortality, and our own inability to be who we want to be. We want a guy who can't quite manage and who learns to do better. Along the way, there are laughs, maybe a few tears, but not the melancholy that permeates so much of Synecdoche, New York. There's no escapism here.

Here is how it happens. We find something we want to do, if we are lucky, or something we need to do, if we are like most people. We use it as a way to obtain food, shelter, clothing, mates, comfort, a first folio of Shakespeare, model airplanes, American Girl dolls, a handful of rice, sex, solitude, a trip to Venice, Nikes, drinking water, plastic surgery, child care, dogs, medicine, education, cars, spiritual solace--whatever we think we need. To do this, we enact the role we call "me," trying to brand ourselves as a person who can and should obtain these things.

In the process, we place the people in our lives into compartments and define how they behave to our advantage. Because we cannot force them to follow our desires, we deal with projections of them created in our minds. But they will be contrary and have wills of their own. Eventually new projections of us are dealing with new projections of them. Sometimes versions of ourselves disagree. We succumb to temptation--but, oh, father, what else was I gonna do? I feel like hell. I repent. I'll do it again.

And so on. Just read the whole thing. The review is a thing of beauty.

I may use it in class, write a sort of response to it, around it.

Oh me! Oh life! of the questions of these recurring.
Of the endless trains of the faithless, of cities fill'd with the foolish,
Of myself forever reproaching myself, (for who more foolish than I, and who more faithless?)
Of eyes that vainly crave the light, of the objects mean, of the struggle ever renew'd,
Of the poor results of all, of the plodding and sordid crowds I see around me,
Of the empty and useless years of the rest, with the rest me intertwined,
The question, O me! so sad, recurring--What good amid these, O me, O life?

I realized something today. I don't necessarily go for the "escapism" of film all the time, but I do escape into film. Even a depressing thinkpiece like Synecdoche, New York. When I sit down to write this blog, it is generally something easy to do because it lifts me above, or pulls me out of reality. Alternatively, when I sit down to write my thesis, it pulls me down, anchors me back into reality... Which it actually isn't supposed to. Like Caden producing his "play" to understand... well, everything, I write to somehow encapsulate self and expression thereof into something that is both formal in structure yet entirely informal in detail. It's a strange beast, my thesis, deliberately avoiding the formality of a research project while absolutely having to be presentable as something quite formal and useful. Fiction comes easy to me. For some reason, this--this blog--comes easy to me most days. But, the thing I'm producing there? Not so easy. I overthink it. I want it to do more than it will. I forget how glad Julie Ellen Benesh was that I even read her dissertation.* That I said negative things about a lot of what she wrote didn't matter. People just don't read dissertations, so that I had was good.

* (If you were not here for phase one of this blog, I spent many days systematically critiquing Benesh's piece: "Becoming Punxsutawney Phil: Symbols and Metaphors of Transformation in Groundhog Day." If you've been here recently, with my three part critique (1 2 3) of the supposed plot holes in Star Wars The Force Awakens), you can probably imagine how that went.)

I think I really want to turn bits and pieces of what's going into the thesis, along with material from phase one of this blog, into something else. I cannot just write into the ether. I need something more concrete to result from this. I need to leave something behind...

That you are here--that life exists and identity,
That the powerful play goes on, and you may contribute a verse.

Do I quote Walt Whitman and embrace the melancholy of this film because I'm starting to feel my age? Because I feel that I am behind schedule on what I'm supposed to do? That I am supposed to do something? I write this sentence as Ellen explains how she understands Caden. Right now, the idea of someone taking over as the director of my life and giving me an earbud to pass on instructions--that's almost appealing.

Really, I'd rather be me. But a little help, or someone to whisper in my ear--that would be nice.