i knew who i was

1) When Craig first enters Malkovich's head, he has a piece of wood in his hand. On the one hand, I'm not sure why some random board was sitting in the file room. On the other hand, as Craig points out, that board disappears. On a third hand, the board actually shows back up at the end of the film when Craig is kicked out of Malkovich's head for the last time.

2) There was a piece published on rogerebert.com the other day--"Unfathomable Life: A Writer Grieves for Her Father, Through Five Movies." The title gives it away. Jessica Ritchey writes about her grief and her grieving process by reviewing five movies through 2015. It's remarkably succinct in how big it is, how encompassing of so much of the human experience but also entirely isolated to Ms. Ritchey's experience. It's the argument I make time and time again in this blog--movies can evoke so much, pull us out of our selves, or push us into ourselves just when we need it. Groundhog Day can inspire you to be a better version of yourself. Adaptation. can inspire you to write... I was looking at my screenplay Fugue, by the way, and noticed that the date I completed it was just twelve days after Adaptation. was released in theaters. I know that in 2003 I wasn't running out to theaters every Friday like I have some years when money for conspicuous consumption was more readily available, but I know I saw Adaptation. its opening weekend. Saturday, probably--that was February 15. I went home and told my wife that she needed to see it as well. Drove her to the theater and dropped her off for the next showing. The film excited something in me. I wasn't writing every day anymore. In fact, it occurs to me that I only managed. To write fiction daily from maybe late summer 1996 to fall 1999. Just over three years. It seems like such a longer time. Of course, I'm sure I conflate all the various, standalone writing projects in the years before or since with that three-year spurt and it feels like more. I mean, I've written fourteen novels, but only half of those in that three spurt. (I write quickly, and I don't rewrite; again, that's why blogging works for me.) The opening scene of Fugue had existed in prose form for years, but it was really just a scene with no direction. Mysterious girl, an amnesiac, wanders out of an alley and a man she doesn't recognize points a gun at her. That was it. The guy with the gun would end up sliding farther back in the story and the girl would wander into the street and a car would hit her rather suddenly. (That sort of thing had not become a movie cliche just yet.) This version of the opening scene owed something to the car crash in Punch-Drunk Love a few months early. So, maybe part of the screenplay version was already written by the time I saw Adaptation. I don't quite remember. But, memory is tricky in how it re-forms every time you access it. If I were writing a memoir--and I sort of am--I would have me with a half-written script, stuck, suffering from a bout of writer's block. I'd see Adaptation. and, thankfully, not just jump to inserting myself into the story like fictional Charlie Kaufman does. Instead, the meta- approach, the story wrapped around itself, would inspire me to finish my script by, instead of just having Persy get away from (or probably kill) the private detective who is pursuing her but would confront the author of the story who--this is where it almost doesn't make sense even to me after all these years--had... changed her life. I wanted to say ruined. You, dear reader, have not read the script, of course. My ex is the only person beside me who has read the thing all the way through. It's even been a while since I looked at it so I'm going on my memory of it. And, I remember Persy--who has been living in a literal fantasy land--tracking down the author of a series of novels set in that fantasy land, ostensibly because she blames the author for how her life has gone badly. But, in retrospect, I realize that can't be it because it's the fantasy part of Persy's life that goes well. If anything, she should have been there to thank the author. But then the story went to an extra level, and Persy confronted... Not me, her other author. But, the audience of the film this screenplay would be. That separation of the realities, the tone of it--that came from me seeing Adaptation. when I did. I finished the script February 26. 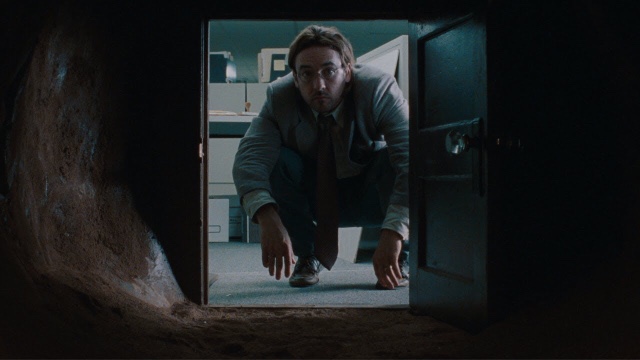 Too much of me and not enough of Jessica Ritchey. Of course, if you want her, you can just click that link above and read her piece. A particular line jumps out at me right now, though. At the end of the section about Mad Max Fury Road, she writes: "[L]ife never returns graciously, slowly letting you find your bearings. It returns demanding and hungry and thirsty. You have but time to grab your coat and follow." Many times, not just after watching Adaptation., I've come out of the movie theater inspired to write or dreaming of being a director or an actor, having some suddenly all-encompassing notion of who and what I could be that was different quite fundamentally from who I felt I was already. Movies change you just like being John Malkovich changes Lotte. After thinking about her first venture into Malkovich, she proclaims to Craig that she's a transsexual. She wants to go into Malkovich again to be sure. Malkovich is a story. Malkovich is a movie. Malkovich is an epiphany. Like seeing Birdman and wanting to write (or star in) a play, for example. Like watching Interstellar or Space Camp or 2001 or The Right Stuff and wanting to be an astronaut. Like watching one of my favorite films ever (which I have yet to include in this blog), The Zero Effect and wanting to be a private detective. Like watching The Empire Strikes Back and wanting to be a Jedi. Or watching any incarnation of Batman or Superman or The Avengers or Spider-Man and wanting to be a superhero. I mean where else do we get our ideas but as fractions or amalgams of the ideas that are already out there. Sure, at some point, going backward through human history, through lingual history, you'd get to a point where the imagination for such things came into being, became complicated enough to really imagine being something else, something more. But, fathoming that moment is a complex and complicated process. Imagining it, imagining how it triggered a string of wants and urges that has been passed down from prehistoric man to modern man to me is as simple as writing this sentence. There are no original ideas. Maybe there are some unique ways of detailing an old idea, but the ideas still remain pretty basic. Like Being John Malkovich--the details are unique but the basic idea, the fantasy of being someone else, of stepping into someone else' shoes for a while... this is an idea that has got to be as old as whenever we became conscious enough to identify not just self but other.

And, I imagine--coming back to #1--that maybe that board that Craig lost inside Malkovich's head is like an anchor. No matter how much Craig wants to change, no matter how much he wants to manipulate his way into not just temporarily but permanently being John Malkovich, there is inevitably a piece of Craig that remains utterly untouched, the same that it has always been. A core self still holding onto that board because he's too afraid to just let go of who he is and crawl into that dark hole in the wall without any fear. That board is caution. That board is like his soul. Or his conscience.

Ritchey, by the way, takes her title from a poem called "Utopia" by Wislawa Szymborska. A pair of lines in the poem remind me of a movie theater, of sitting and watching the flickering of light in the dark twisted as if by a prism into images that make sense even when they do not. Szymborska writes:

Echoes stir up summoned
and eagerly explain all the secrets of the worlds.

As if a single film could shine a light on everything.