It's also what I do in this blog every day.

(Moving on, in this blog at least, from the Oscars.)

Adaptation. starts with the fictional Charlie Kaufman (Nicholas Cage) ranting inside his own head, worrying. Then, we cut to billions of years earlier, and time speeds back to the present. The context--Charlie's problems and the history of the world are side by side. Then, we're with Charlie, meeting with Valerie (Tilda Swinton) about adapting Susan Orlean's The Orchid Thief, and he's thinking too much again, but we're with the story. Charlie's muddled thoughts are part and parcel of the story, just as Adaptation. is not just an adaptation of Orlean's book but a film about the idea of adapting the book, adapting book to film, nuanced story to Hollywood, a harried life into something... better if you're lucky. Charlie isn't lucky. But the movie keeps coming back to how we adapt to things. Even one orchid, as Laroche (Chris Cooper) explains to Orlean (Meryl Streep), has adapted to a specific moth that pollinates it.

The second best thing about Adaptation. is Donald, the imagined twin brother to Charlie Kaufman, also played by Nicholas Cage. He's a naive foil to Charlie, an inexplicable plot device early on but vital to the Hollywood ending. (He's also useful for discussion of screenplay structure.) 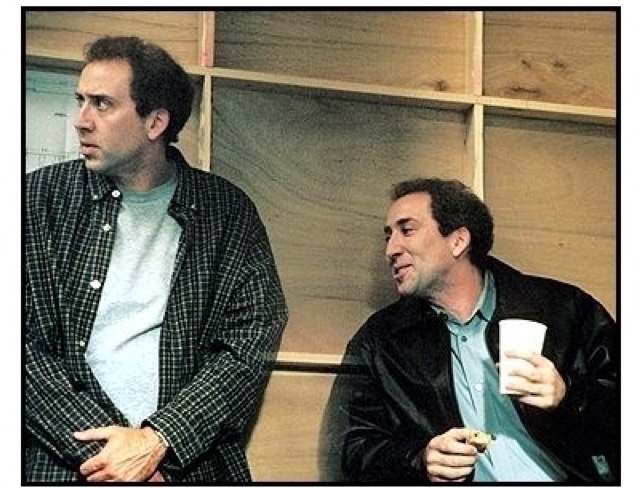 The best thing is that this is a film that actually deals with writing. The way ideas mix and mingle and get in each other' sway. The way a writer's voice can get lost or discovered in story and vice verse. Some movies about writers are great movies--Misery, for one--but don't really deal much with what it is to be a writer. Einar Wegener's (Eddie Redmayne) painting the same image over and over in The Danish Girl, or Gerda Wegener's (Alicia Vikander) attempts to capture women through her husband in her own paintings--these things convey the process better than most films about writers. Capote does a good job of showing the work if not the process. Wonder Boys deals in the ownership of it but not the process. Finding Forrester tries to be profound but misfires, in my opinion, telling us almost nothing about writing, instead offering platitudes about finding one's voice. I think I've conveyed that idea in this blog more than once better than that film does. It's like most films just can't be about what they're about. Debate movies never really deal with how debate actually works, for instance. Indiana Jones doesn't deal much in realistic archaeology, and so many more.

My blog entries are rarely about the movies anymore, either. Not too specifically, anyway. They drift and they flee. Like the past week, eight days, eight (1 2 3 4 5 6 7 8) Best Picture nominees, and I maybe had a couple paragraph's worth of writing specifically about those films. I got sidetracked... No, that implies that it was accidental or merely incidental, when in this case it was quite deliberate. I didn't set out to properly examine those eight films and subjectively, if not objectively measure them against one another. I went in with an agenda--the #OscarsSoWhite thing--and even that I let drift a little this way and a little that. Because, that is how my mind works. That is how this blog works. Do what I want as an excuse to watch movies is the same things as watch movies as an excuse to write on a regular basis. Because, for as long as I can remember, I have wanted to write strange and interesting stories. I've written numerous novels and short stories, have written more than 900 of these blog entries now. And, a couple hundred pages (so far) of academic papers as well. Yet, I still feel like there is more to get out. More to say. Always more to say.

(And, having said that, I will cut this entry a little short.)