Outside of the #OscarsSoWhite problem, there's always folks labeling the snubs. Not just Will Smith for Concussion or Idris Elba for Beasts of No Nation or Kiana Kiki Rodriguez for Tangerine but, you know, what about Tom Hanks or Mark Rylance for Bridge of Spies, or Helen Mirren for Trumbo? People talk about Samuel L. Jackson for The Hateful Eight but no Walter Goggins? Not Kurt Russell? Michael B. Jordan for Creed but no Jake Gyllenhaal for Southpaw? How about Oscar Isaac for Ex Machina? And what about Gunes Sensoy for Mustang or Geza Rohrig for Son of Saul? Why must the role spoken in English to matter?

And, where's Ex Machina in the Best Picture list? Hell, where's Krampus in the Production Design category? Where's It Follows for Cinematography?

Those last couple might seem silly, but that's my point. The nomination process is not only complicated but subjective to start with. If all you saw this year were the Marvel movies and The Revenant, of course you're going to think The Revenant was the best. If you don't usually watch documentaries but really like Michael Moore's politics, maybe you went to see Where to Invade Next and you're rooting for it. And, you're going to care. For example, personally I was not as impressed by, say, DiCaprio's performance in The Revenant. And, I mean his performance in it. I get why the role was a big deal, how much harder it would have been than a film like, say, Spotlight, a bunch of scenes of people sitting around talking. I understand why the acting branch of the Academy would nominate him. And, I'm okay with him winning. Some people reduce the roles that don't impress them into putting on accents. If you didn't like it, this was Will Smith's role in Concussion, this was Bryan Cranston's role in Trumbo, or Mark Ruffalo in Spotlight, or Christian Bale in The Big Short or even Idris Elba in Beasts of No Nation.

(I considered jokingly suggesting that Saoirse Ronan's accent was put on in Brooklyn, which I've watched again today, but somebody might have been confused by the joke. Instead, I will take this moment to point out that I like this movie more the second time. The background actors, for example, really make the film in the scene where the guy sings the old Irish song. The film has a fantastic sense of time and place. It tells a story that in its broad strokes could happen anytime, anywhere, but it nails it down to this particular time and place.)

It's especially fun when someone who has never acted and barely cares about movies complains because these are millionaires whining about whether or not they might be in the running for a gold statue. Let us skip right past the idea that all of these actors are automatically millionaires. An Oscar nomination, let alone a win, can make a career. Can give an actor the clout to choose good roles.

Of course, if an actor deigns to whine about something important like politics, he or she will surely get dinged for that too. 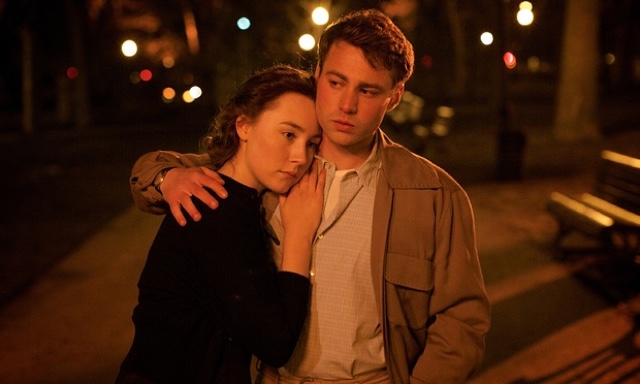 And, in case I haven't made it clear in previous entries, I am not one to diminish the race issue here, either, by comparing them to numerous other "snubs." My point is that there is no objective to this. People defend the Academy, saying it is supposed to be the best, it's about quality, and maybe no actors of colour were that good this year. And sure, that's a possibility in any given year. And the Oscars should not be about quotas. And tradition. And, what about the BET Awards? And, I cringe. The problem, simply put, is that in a society that is only 63% white, how is it something worth defending that an organization can be 94% white and make a habit of only acknowledging white performers and filmmakers? Why is the idea of upgrading to a membership more representative of the world around it a bad thing?

Because, asking why change is scary is so profound.

The thing is, what makes a good performance? There are certain objective standards, of course. But, there are subjective things, too. If you cannot relate to a character, it is going to be harder to connect with the performance sometimes. Also, with, say, a villainous character, maybe that lack of connection will be the thing that makes the performance stand out. Same with the film itself. If you pay attention to the #OscarsSoWhite talk, it's all about the acting, and the directors gets mentioned sometimes too. But, does anyone talk about what the performances actually meant? Does anyone talk about how Will Smith not only put on an accent but also put some real emotion into it? Does anyone talk about Leonardo DiCaprio's performance at all, or do they just talk about how he got naked and slept inside a horse's carcass and ate raw liver even though he's a vegetarian and he's due for an Oscar because he's been doing this so long? I'd ask if anyone said anything about Bryan Cranston's role but I fear I may have been about the only person who watched and loved and was angered by Trumbo. Why are we more excited by crawling through the woods or talking to a camera on Mars over something more subtle, more real. I mean, Emory Cohen as Tony in Brooklyn, when he thinks Eilis (Saoirse Ronan) is going to break up with him and the conversation goes, well, better--that is an adorable, and real moment. But, most people don't see films like Brooklyn. Most people don't care about films like Brooklyn. They go to movies to escape mundane stories like this.

In a New York Times piece, I've cited before, Wesley Morris cites the 2010 nominees for Best Picture--that first year they went back to having more than just five nominees. Avatar, The Blind Side, District 9, An Education, The Hurt Locker, Inglourious Basterds, Precious, A Serious Man, Up, and Up in the Air. A mix of genres, a mix of styles, big and small, and a few of those probably almost no one saw. Except for The Blind Side which I watched on video, I saw them all in the theater. I don't mean to brag but to point out that the variety is what makes film so powerful. It can tell outlandish stories about aliens or alternative history stories, personal stories... Hell, a few very different personal stories there. It can be animated, it can be grounded very much in reality with no special effects to speak of. It can inspire. It can entertain. It can anger. It can depress and impress and it should do anything and everything if you watch enough movies. I almost want to survey everyone who offers an opinion on the Oscars on what films they actually saw this past year. Not that--as I've already suggested above--I will hold it against someone for rooting for the films they actually saw versus obscure pictures. But, I like information.

The thing is, I think we can only benefit from the variety. See more types of films, see more types of characters, learn to identify with different kinds of people. The Academy can also benefit from a little more variety than it has. Tradition has its place. But, filling out the membership rolls with a younger, more diverse crowd will make things... Better is too simplistic. My take on it is this: in our everyday lives, we are better off if we have the chance to interact with more and different people. In producing films, Hollywood would be better off employing more and different people. In inviting new members the Academy would be better off employing more and different people. It doesn't matter if you nominate performers and filmmakers based just on quality if a) your idea of quality isn't restricted by your own prejudice and limited experiences and b) you are not just a bunch of old white men.

We tend to trust our old white men a little too much, I think. In time, I think the problem will take care of itself. But, why wait?