rey, these are your first steps

Took a break from Charlie Kaufman today, was going to try to see one of the few Golden Globe-nominated films I haven't seen yet (the awards are tomorrow), watched Star Wars The Force Awakens again, instead.

While there is always room to say more about any given film, I actually do not have much to comment on today. I had considered a response to Andre Seewoods's IndieWire piece about Maz Kanata and what he calls the "othering of the black female body"--in short, I don't totally buy his argument and think he deals a little too much in attractiveness (and winning an award as experience, but that's not that big an issue). I also was thinking about all the plot holes--my three days (1 2 3) picking apart Seth Abramson's Huffington Post pieces--and getting a little bitter because the Groundhog Day Project doesn't get much play online, people don't get excited by my insights here enough to share all over Twitter or Facebook or what have you... Nor do I necessarily want them to. Not all the time, anyway. But, you write somewhere around 10,000 words on the new Star Wars, you hope for a little attention. (Some other guy goes after Abramson's 40 and gets posted a few places. Not that I'm envious.)

I want to say a couple things about Rey and move on.

First, there's a hint in the film that Kylo might have an idea who she is. When he throws his first big tantrum, the officer reporting to him mentions a girl, and Ren pulls him to him and chokes him, asks, "What girl?" But, then the film cuts away. We don't hear if there is any answer, or if there is any insight. But later, when the First Order arrives at Maz Kanata's castle, there is no indication that Kylo makes any effort to go after anyone in or around the castle. He certainly doesn't go after Finn. He goes after Rey and BB-8. He's got reason to go after BB-8, of course, but can he sense where a droid has gone? Or is he drawn to Rey because of who (or what) she is?

Additionally, sure, she has seen the map, but if Kylo has an idea of who she is--maybe he knows her from Luke's academy--then she's useful anyway. Torture her and you might draw out Luke just as Vader did in The Empire Strikes Back.

Second, Rey's vision. It begins after Finn leaves her. He leaves and her thoughts, expectedly, turn to being left behind. The vision starts with sound alone, herself as a child screaming. There's nothing more until she touches the lightsaber.

The thing is, the vision begins more like a vision of the lightsaber, a place it has been, than Rey's, necessarily.

Starts with a hallways like one in Cloud City. A piece on Cinema Blend, because the script was made available to the WGA, confirms that it is Cloud City. That falls apart and Rey is somewhere with Luke and R2-D2. Something is burning nearby, but we don't really get to see it. The script says it's a temple. Guy who gets stabbed by Kylo is called a "warrior" in the script but "Clan Leader" by the production according to Boy Genius Report.

Now, the Cloud City hallway--that's a place the lightsaber has been. I'm guessing Luke didn't have his old lightsaber around (or maybe he did), so I'm wondering if this bit with the Knights of Ren isn't a flashforward, instead of a flashback. Maybe.

Or is Rey simply sliding into Luke's position in each of these scenes. She is him in the Cloud City hallway, she is him (though he is separate from her for a moment) at the Knights of Ren attack, and then--assuming as many are that she is his daughter--she is him on Jakku, leaving herself behind with Unkar Platt. (Maybe that is where she switches to herself in the vision.)

But then as the ship flies away, the sun dies, closing like an eye, the same way the star will later over Starkiller Base... i.e. it's a flashforward within the flashback. Then she's in the woods on Starkiller Base (or so it appears) and Kylo is there. And, she's alone--no Finn. 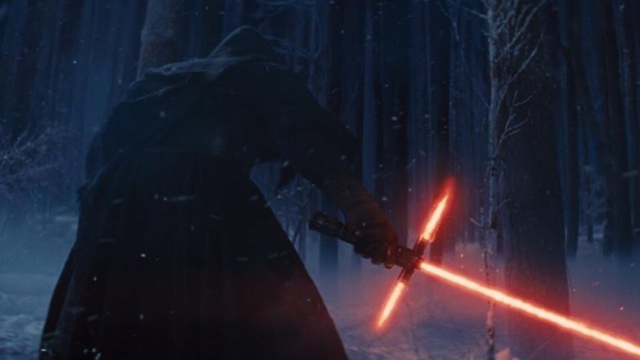