Shaun the Sheep Movie, Boy & the World, and When Marnie Was There each depend on a strong sense of location, which seems strange for animated films, where location can be anywhere at any. time. In fact, Boy & the World takes advantage of the formation its early scenes, creating an environment out of mostly blank space. All three of these films take their protagonists (Shaun and his entourage of sheep, the unnamed boy, Anna) from their usual locations (farm, farm, city) and relocate them (to the city; to larger farms, factories, cities and beyond; to a rural village and the nearby. marshlands) to dramatic effect.

Where these films differ most, and most obviously, is in their style. Shaun the Sheep Movie is claymation; Boy & the World is mostly line drawing, with increasing amounts of colour as it goes; and When Marnie Was There is more classic animation, specifically Japanese anime.

(I've previously watched and written about Inside Out (for this blog and my review one) and Anomalisa. A few times for the latter film: 1 2 3 4. With these three today, I have finished out the animated feature category for the Oscars. My favorite is still Anomalisa but Inside Out still seems like an easy winner because it is more accessible for a larger audience. Plus, despite the subtext, the text of Anomalisa is. Still about an older man taking advantage a younger woman to cheat on his wife, and that text can distract from the larger ideas within the film. As for the other three, read on.)

Taken separately, Shaun the Sheep Movie is the most audience friendly of these three films. Both Shaun the Sheep Movie and Boy & the World are (effectively) without dialogue. Both do include dialogue, but for Shaun it's gibberish and for Boy it's (reportedly) reversed Portuguese. For the former, any dialogue would be upstaged by the visuals. For the latter, the boy doesn't understand what is going on around him so we also are not supposed to understand what anyone says. Being a Studio Ghibli film, Marnie does use a lot of dialogue but often the dialogue is secondary to the visuals.

Shaun is the most fun and straightforward, though I joked on Twitter about the thing being a metaphor for the great migration, the sheep as African Americans leaving the farm to the big city. There is room for a (only somewhat tongue-in-cheek) piece comparing a lot of its details to the larger history, not just the America-specific version (because Aardman Animation is British) but something like industrialization, rural folk trying to fit into the urban life, Trumper (the animal catcher) as police cracking down on the new arrivals, the foreigners or whatever. But really, it's just trying to be funny. And it has some great gags, like the cat as Hannibal Lector or the (as-it-turns-out) fake dog with the intense stare.

I'll skip past Boy to Marnie.

Marnie makes for a touching story about an isolated, introverted girl sent to live with relatives because of her asthma. She befriends a girl who lives nearby, a girl who may or may not actually exist. Maybe it's because I'm American and it's 2016, but I read the text here as a potential romantic relationship and not just two girls needed friendship because they have very little else. The eventual conclusion of the story negates my reading but the story as it is is still quite good, though some of the dialogue is a bit cheesy. 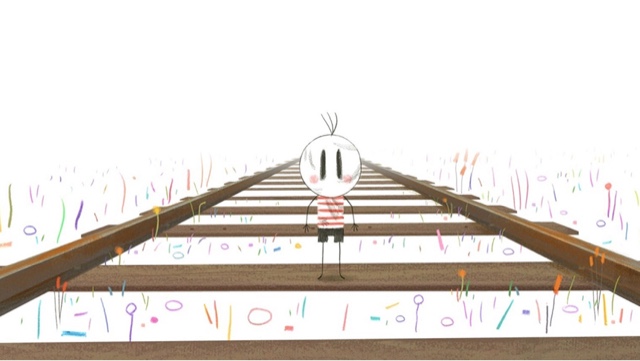 Boy was my favorite of these three even though its overall message is a bit overt and its eventual climax is a bit... too much. That climax involves the visual of the drawn film catching on fire and turning briefly to live action and I love the concept of it and the execution of it outweigh the obviousness of its meaning. Along the way, the boy's world gradually turns from mostly blank space to a world filled with colours and shapes and patterns that create an adult world quite different than what he knows. Ultimately, a simple story about a boy chasing after his father turns into a treatise on the cotton industry and the third world being overtaken systematically and violently. My kind of topic,sure, but I think the visuals, and the breakdown thereof, serve the topic well.