me or everyone else

A new angle for the next week (then I mean to get back to Charlie Kaufman to end out the month): the Oscars. I talk about them off and on anyway. And as I have seen most of the films nominated, I am inclined to express opinions about them. Plus, this past week I set up my own Oscars-specific page on Facebook. I intend to get into, and probably rant for many hundreds or thousands of words about, the #OscarsSoWhite controversy, but may not get that far today. 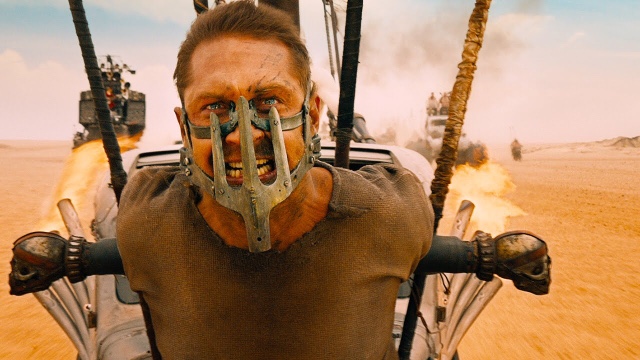 One best picture nominee a day, starting with Mad Max Fury Road today. I've already seen each of the eight films and wrote in detail about a few of them in this blog already, but I might get so sidetracked by Oscars business and bigger Hollywood politics--and societal standards on race and gender for that matter--that I might say very little about the films themselves this week. Not one per entry anyway. Mad Max was headed toward the storm before I even started typing today. That might be the only specific reference I make other than to say that this was, indeed, one of my favorite movies this year.

To start into this year's Oscars--and, for the record, I intended to jump right into the race thing but got sidetracked while researching some details--I wanted to explain, for those who don't know, how nominees are chosen. For today, in particular, I'll go with the numbers related to choosing Best Picture. For that matter, how does anyone quantify a Best Picture at all. The former, of course, is an objective explanation of how a whole lot of folks--reportedly 6261 members currently in the Academy--put their subjective (and probably politics- and industry-biased) votes into an objective system. The latter is almost entirely subjective. Almost. There are certainly qualities that separate out the best (plural) films from others, objectively.

For example, on the subjective front, I like Brooklyn and there's no doubt that Bridge of Spies was a solid film, but I would not put either one in the top eight films of the year, not even the top ten. The Revenant involves commitment on the part of its cast (not just Leonardo DiCaprio) and crew, before you even look at a frame of the film, that is above and beyond most productions; to use only natural light, the production was limited to only a handful of hours a day in which to film, it filmed on location, dealing with the elements, having to shift locations due to a change in seasons, etcetera. Films like The Big Short and Straight Outta Compton and Spotlight deal in important topics. The Martian and Mad Max Fury Road use visual and special effects to tell stories with depth. And, I could go on.

Take the 6261 (reported) members and divide by the potential 10 nominees for Best Picture plus one. That is, divided by 11. The actual calculation is based on how many ballots are actually turned in but let's assume all the members turn them in. Each ballot is supposed to have up to five films ranked 1-5. The "magic number" to automatically be one of the nominees for Best Picture is 569 (6261 divided by 11). If a film is listed as #1 on 569 ballots, it becomes a nominee. Any ballots that remain with that film as #1 get divided up by their #2. (If ten films reach the 569 mark, then PriceWaterhouseCoopers has an easy job on their hands.) After the first nominee is chosen, the film with the least #1 ballots is taken out of the running and those ballots are divided by their #2. Yada yada yada, they get 5 to 10 nominees that have enough ballots (first #1 votes then #2 then #3 as necessary to fill each film's stack to the magic number of 569 ballots. (Technically, a film could be the second choice on every single ballot and not be nominated because the #1 votes were divided evenly enough.)

And personally, with a system like that--plus, you know, an Academy that is still mostly old white men--I don't necessarily call it a "snub" when a particular film isn't nominated. My favorite films of the year were, in no particular order: Room, It Follows, The Danish Girl, The Big Short, Star Wars The Force Awakens (1 2 3 4 5 6 7), Anomalisa (1 2 3 4), Inside Out, Trumbo, Ex Machina (1 2 3 4 5 6), and Mad Max Fury Road--the only one in my personal top ten that I have never devoted an entire entry to. Not even this one. I mentioned it back in June, during my month of Westerns, but it didn't get more than a sentence. Not all of those are Best Picture-worthy. I don't pretend to have the singularly greatest taste in films. But, I do try to be as objective as I can in assessing a film's worth beyond my own personal scope. I have no particular problem with any of the eight nominees for Best Picture this year being one of the eight nominees for Best Picture this year. They are all solid films with good stories to tell.

For the record, though, if we needed to slash the list down from eight, the first one to go would be Bridge of Spies because it doesn't really offer us anything that we have not seen before in terms of direction or acting quality or even story. Next to go would be Brooklyn because, unfortunately, it lacks any sense of spectacle or necessary importance. I liked Brooklyn a lot, and there should be small (in scope) films put right alongside the big (in scope) films when we are measuring out a year in film for its best. Similarly, I would probably strike Room if I needed to get down to just five nominees. I loved Room but the five remaining nominees are either fantastic productions that stretch the bounds of what film can do, or important films that, well, stretch the bounds of what film can do in a different way. And, maybe it's for personal reasons, but if I had to add a film to the list, my impulse would be to nominate Trumbo. Even though I spent many days on Ex Machina and think The Danish Girl is one of the more important films to come this past year (and my entry about it is one of my favorite entries of the last few months for sure) , I'd only add them if I had to pad the list back out to eight... or I'd strike The Martian and The Revenant, especially since their real worth falls into more specific award categories than Best Picture.

In case you are following the #OscarssoWhite stories, you should realize that I am setting up for some interesting entries this week. In fact, my contention that I don't call it a "snub" when a movie I like is not nominated is like bait.

Prepare for the switch.