this love affair with fire

Right away in Cartel Land, the Oscar-nominated documentary I've got playing right now, in which a guy says in voiceover, "There's an imaginary line out there between right and wrong, good and evil. I believe what I'm doing is good. I believe what I'm going up against is evil." In the larger context, that's the idea to just about every film, every story. Not always good and evil but drama virtually requires some sort of binary for everything--with us or against us, in or out, right or wrong, black or white. The best drama, I think, is in the gray areas, the nuance. But, story structure ultimately loops back around to the binary. Even something like Tarantino's latest, The Hateful Eight, full of a lot of bad people with different reasons to be bad comes around to offering us reasons to care about a few of them, finding some to be less, well, hateful.

Just before I turned on Cartel Land, though, I was watching another Oscar-nominated documentary--

(As you will see as this entry goes, I'm going for a string of all five of this year's nominees. I'm on the fourth right now.)

--and for parts of that one--Winter on Fire: Ukraine's Fight for Freedom--as we're seeing protestors be beaten and gunned down, I'm almost inclined to opt into the binary of good and evil. But, when I wrote a lengthy paper--I think you can read the whole thing on scribd--on the riot in Chicago in 1968, while the narrative (and much of, you know, reality) puts the onus of the violence on the police in that case, in writing about the details, it became clear that while the media at the time and historians since have sided with laying the blame that way, there is much more to it. For example, Frank Kusch interviewed police officers who were there for his book Battleground Chicago, and these men are not evil. Nor do I suspect that police officers today involved in instances of police brutality or officer-involved shootings--the ones to which the Black Lives Matter emerged in response--are evil. But, just as I wrote about when I watched Spotlight last month, institutions serve to protect themselves. Specific instances of going too far do not actually prove that the individuals involved are bad people. Hell, the bleeding heart liberal in me suspects that no one is really a bad person. But that sort of extremism is just as bad as assuming that everyone is dangerous, everyone is suspicious... Like this guy in Cartel Land who just said, "Nothing changes. The criminals just change places. It's always the same."

As the Knights Templar Cartel hangs and then beheads two young men, I suppose I must be clearer. People are clearly very capable of doing evil. But, that a) is not the same as being evil, nor b) does it mean that evil is somehow incarnate and we cannot stop it, and more importantly that we cannot prevent it...

I don't know. Trying to be clear just muddies the water. 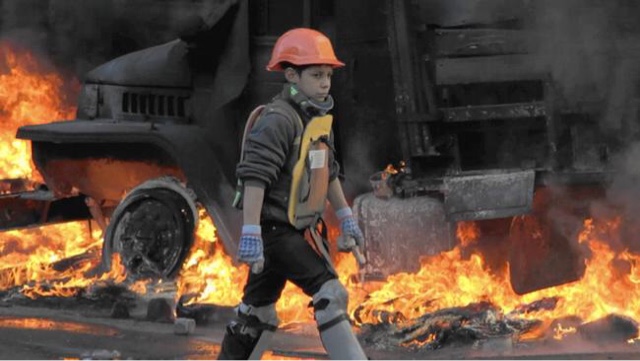 There was a woman at the end of Winter on Fire who made the big observation, something along the lines of, after all the wars we've waged throughout human history, it's remarkable that we still solve problems by killing each other.

I don't figure that it is because we are evil. Or because they are evil. I figure some of us are damaged enough to worry a little too much, and we naturally tend to group together with those with whom we share traits. And, in a world with as many people as we have, and have had for a long time, those groups are pitted against one another to clash over territory, over resources, over beliefs, over stupid little things and the grandest of profundities.

Watching the first two documentaries today--Amy and What Happened, Nina Simone?--I was thinking of writing about the individual human experience, how he turn our depression and our anger inward and turn to alcohol and drugs like Amy Winehouse or turn our anger and our hurt outward and abuse those close to us or promote violent ideas like Nina Simone. I wanted to write about the documentary structure, how these two biographical ones are structurally similar, breaking down to a mostly straightforward three-act structure like a scripted film might. Give us the background, show the rise, and show the fall.

(Winter on Fire defies the structure a little--it's like the biography of a political movement but the act breaks are not as clear because it was filmed as the action was happening, not pieced together after the fact, and the nearly 100 day conflict is not so clearcut as editing can make a story.)

The individual still matters, of course. Amy Winehouse or Nina Simone can inspire some young person who dreams of singing. (And I love a story about a talented person with something to say--personal or political.) The darker parts of their stories can serve as cautionary tales. Some of the individuals in Winter on Fire were absolutely inspirational inasmuch as they were willing to die for their cause. (Personally, I wish we had more people who would rather live for a cause than die for it but I understand that important times, important events, the twists and turns of history sometimes require sacrifice. Dr. Mireles here, puts his life on the line just by speaking in public.

...and then time passes as I keep watching... It is hard to watch a subtitled film--Winter on Fire is and most of Cartel Land is--and write at the same time.

(That is why I have, unfortunately, not been able to write about many foreign language films for this blog, though I would like to. It would automatically take more time than I have most days. Today, of course, is an exception as far as time goes.)

The American side of this film--the part not in Spanish--is not very interesting or insightful. I'm sure there is room for an entire documentary about the men who patrol the border to stop drug trafficking, but I don't think this is it.

Matter-of-fact talk about torture and death. An old man who used to be head of a death squad who offers up details of how he killed people but won't talk politics. An old couple still mourning their murdered son after many years. A man interviewing his brother's executioners. Not the happiest of documentaries.

Remarkably direct conversations about very horrible things in this one.

Old lady just gave her son advice on how to kill his interview subjects if they try anything.

Despite anything I might have said about evil above, the way old men talk casually about mass murder and torture in this movie is disturbing. But the bureaucracy of it, the banality of it... It leaves... I don't know what it leaves. But the idea that the victims here want truth and not vengeance is powerful.