i, for one, am very grateful to have been here

The penultimate viewing of Groundhog Day has ended only minutes ago (as I start writing this entry). I (mostly) sat and just watched the movie rather than type this entry as it ran. I guess I owed the movie a good (mostly) uninterrupted viewing.

I don’t know if I have a lot to say tonight. But, I think I have something to say. I was reading the Day 365 entry for the Lawrence/Julie & Julia Project earlier today. I am not on my final viewing just yet—that will happen at the party tomorrow—but I like how Lawrence Dai writes, “As I reflect upon this past year, I have found it increasingly difficult to pinpoint what today’s final viewing really means.” I get that. I’m not sad about being done with Groundhog Day, but nor am I happy to be rid of it. In fact, I intend to watch the movie again (relatively) soon…

It occurs to me that, even parenthetically, that “relatively” doesn’t make sense. For me, relatively soon, would probably be sooner than a month from now, you know, since I’ve been watching Groundhog Day every day. What I mean is I currently intend to revisit Groundhog Day roughly a month after Day 365. But, enough about the future. How about the past.

First of all, if you just cannot live without my Groundhog Day-related ramblings, you can start over with Day 1: on me in 3… 2… 1…. If you need to find some specific entry, these are the 6 recap entries: I’ve written about—and I don’t think I will take the time to link all of these things (sorry)—the color blue, eternal recurrences, déjà vu, Rita being a robot, homelessness and love. I’ve written about screenplay structure, cinematic Christ-Figures, sexism, racism and nuclear war. I’ve written about Joyce Kilmer, Sir Walter Scott, Anton Pavlovich Chekhov, Harold Ramis, Danny Rubin and Bill Murray. I’ve tied Groundhog Day to numerous other films, to numerous television episodes, to books, to life, and to itself. Really, 365 days is a very long time to write about one topic.

Insert a shot here of me laughing, because clearly it hasn’t just been one topic. I once argued, perhaps confusingly, that Phil “isn't just an everyman because he represents each of us. He's an everyman because he represents all of us.” There’s a little Phil Connors in each of us. I originally envisioned the WWPHD? Bracelet with tongue firmly in cheek, but I’m actually wearing one right now

(and, I’ve got a few more available if you need one)

and I’m not even sure that I wear it ironically, as they say. The thing is, the answer is actually quite simple and straightforward. What would Phil Connors do? He would do everything. He would try it all, because that is the nature of life. If you don’t try new things from time to time, if you don’t give up on the things that don’t work and move on to new stuff, then you just aren’t living. Not really.

Except you are. We all are. Even before this project, I operated under the assumption that the purpose to life wasn’t some objective thing existing on the outside of each of our lives, but something we assign ourselves. We create our purpose each and every day. I’m reminded of the lyrics to “Purpose” from Avenue Q:

i don't know where
I'm gonna look,
But I’m gonna find
My purpose.
Gotta find out,
Don't wanna wait!
Got to make sure that my
Life will be great!
Gotta find my purpose
Before it's too late.

That’s the kind of thought process we all go through at some point or another. And, I would never assume that just because you find a purpose or a goal that you will achieve it, but I’d like to think that having a purpose makes life more worth living. Having something to strive for helps. Reverend Joel Hawes is often credited with a great line:

Aim at the sun, and you may not reach it; but your arrow will fly far higher than if aimed at an object on a level with yourself.

Having committed myself to this project and stuck it out all of this way, I feel like I have grown, not unlike Phil Connors. What seems like only a handful of years ago now, I had little interest in going back to work or going back to school. Now, both of those things excite me. Teaching excites me. Coaching excites me. Parenting excites me. Life excites me. Someone said to me just yesterday that I will be proud of this project for the rest of my life, and I think she’s right. This project, and the year around it, marked many changes for me, creatively, personally, educationally, career-wise… I am not the same person who just under a year ago wrote the following:

So, the plan: I will watch Groundhog Day every day, and I will explore its aspects and research into its tangents. I will run the film into the ground and, I hope, build it right back up again. Like Phil Connors with his day in Punxsutawney, I will probably have some crazy ideas early on, I will probably get sick of the film after a while and watching it and writing about it will become a chore. But, sometime later, maybe I can explore the film in such a way that I rebuild it, rebuild myself, and maybe help my readers, whoever they may end up being, to rebuild themselves with a better grasp of, dare I say it, the human condition.

I’ve torn this movie apart time and time again. I’ve approached it from so many angles that, well, I know it so well that I could watch it again with my eyes closed, without sound, because Groundhog Day has become a fixture in my daily life—

(In fact, it has been such a fixture, such a meaningful piece of the past year, that today I marked it by marking myself. A permanent link to Groundhog Day: 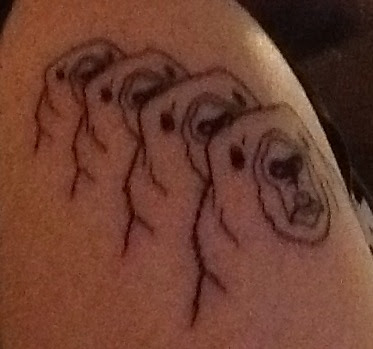 I’ll see about getting a better picture at the party tomorrow, maybe.)

However wide my audience has been or not been, given any specific day, I am glad to have been able to share my thoughts and to share information day after day after day. I thank all of you who have been here to read my blog. I wish you all well.

Today’s reason to repeat the day forever: to understand the fleeting nature of all there is even as it lasts forever. To know poetry and love, to know fear and sadness, to know happiness and grief, to know life and death and everything in between.

And, one more thing today, this photo I have neglected to share until now, our cat Bugsy watching Groundhog Day: