(note: mistakenly mixed up my year for The Ring with the release date for Ringu. So, the specifics in the first couple paragraphs here are 4 years off. The point about television ownership still stands, though.)

…except, I don’t. I love television. I think television has it’s brain-frying downside, and a lot of people—like several of those in that Rear Window-inspired balcony scene in The Ring—use television to numb their minds, to yank themselves out of their dreary lives, to spy on the rich and famous perhaps, or live vicariously through reality game show contestants, or just to laugh at a good sitcom. In 1998, when The Ring was in theaters, there were 67,011,180 households in this country with cable television, and that was 67.4% of households with TVs… meaning 99,423, 116 (rounded off) households had television in this country alone, according to Nielsen Media Research. According to Infoplease, there were 102,528,000 households total in 1998 (again, in the United States). So, roughly 97% of households in the United States had televisions. The #1 show was ER with 25.4 million viewers…

Looking at a table of TV shows from 1998, I see a lot of shows I watched. I don’t watch as much television anymore (and when I do, I binge watch multiple episodes at a time, rarely watching live TV) but back then I watched a lot. As I said above, I love television. For example, Sundays I watched The Simpsons, That ‘70s Show, The X-Files and The Practice. Mondays I watched 7th Heaven, Hyperion Bay and L.A. Doctors—that last one, I’ve still got its one and only season on video because it never came out on DVD. Tuesdays was for Buffy the Vampire Slayer, Felicity and Brimstone at the same time (but, if I remember right, Brimstone not only didn’t last long, it moved nights a couple times, ending up on Fridays before it was canceled), Sports Night and NYPD Blue. Wednesdays was Seven Days and Dawson’s Creek at the same time, It’s Like, You Know…, To Have & to Hold, Party of Five, Star Trek: Voyager (sometimes), and Charmed at the same time, and Chicago Hope and sometimes Law & Order at the same time as well. Thursdays, Vengeance Unlimited (which I’ve still got on video), Friends and ER. Fridays, Providence and Legacy at the same time, Trinity and The Magnificent Seven at the same time, and Homicide: Life on the Streets. Saturdays, sometimes Early Edition, Fantasy Island, The Pretender, Cupid and Profiler.

And, that is a lot of information you don’t need when I already said I love television. I think television can provide us with great drama, with brilliant comedy, with meaningful content as well as escapist fare. Television is not the problem. We are the problem, when we choose to watch mind-numbing shows instead of shows that make us think… and I’m not even suggesting we should not have mind-numbing shows; but we should maybe temper our more mindless viewing habits with more mindful ones. The Ring shows us ubiquitous television, at least briefly, but then doesn’t put its antagonist on the airwaves that make television such a powerful and pervasive medium. Samara’s reach uses a video tape, not the network airwaves, not cable television. Still, The Ring seems to want to make television, and especially the reproduction of images on it, into something ominous and dangerous. As Brummett (2006), writes, “A remarkable feature of this film in its several iterations is a dominant anaxiety over technological reproduction” (p. 450). Brummett suggests that The Ring is using the idea of reproduction—not sexual reproduction but copying—as a horror-theme because such reproduction takes away from distinctiveness, from our individuality. Except, again, the film never really makes this leap. No character is copied in any way (except maybe Samara, but that is hardly reducing her agency or power. Hell, even the fact that Samara appears, in nearly all of her scenes, with her hair in her face, thus obscuring her individuality, actually marks her uniquely. 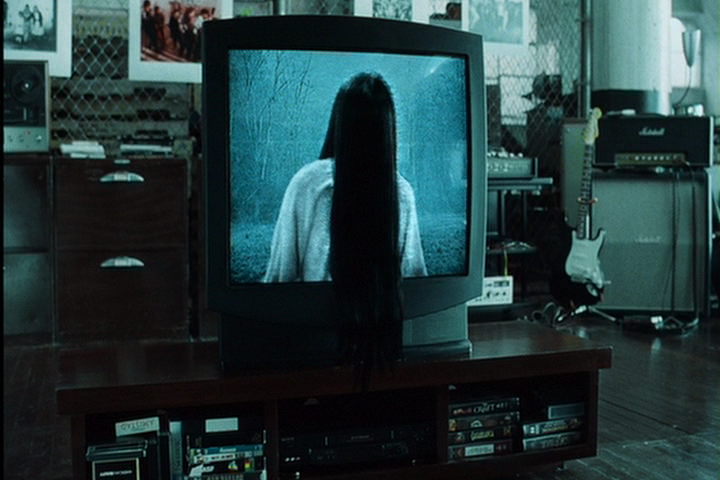 Similarly, the blurring of photos and video of those within their doomed week (between video watching and death) may be obscuring their identity but it also makes them quite unique.

Anyway, television ownership went a little higher for a bit, and now is back down to around 97% again. Stelter (2011), writing in the New York Times, argues that this “decline” has occurred because of poverty and technological wizardry. I referred yesterday to how televisions are not uniquely our source for, well, television content anymore. This comes from Stelter’s “technological wizardry.” Stelter writes: “young people who have grown up with laptops in their hands instead of remote controls are opting not to buy TV sets when they graduate from college or enter the work force, at least not at first. Instead, they are subsisting on a diet of television shows and movies from the Internet” (p. B1). Tryon (2009) argues that The Ring “views TV and video as invasive technologies that threaten the security of the family home” (p. 45). There’s an argument to be made there, but The Ring also shows us television as babysitter, for Samara in her loft in the barn, for Aidan when he can’t sleep, for (oddly enough) the babysitter when she’s waiting up for Rachel to get home. Herein lies the real danger, I suppose, in the ubiquitous attachment to screens; the more passively we use television or other screens, the less genuine our experience of the world becomes…

This from a guy who watched the same movie every day for a year and currently has The Ring playing on his iPad right next to the desktop computer’s monitor to save time.

The Ring crucially emphasizes an even greater sense of isolation among its characters [than Poltergeist], who often watch TV alone or use it as a substitute for real interaction. (p. 47)