she just wanted to be heard

I – RINGS VS THE POWER OF SUGGESTION

Before I get into something more interesting, I just wanted to say that the prequel short to The Ring Two—Rings—is probably several times better than The Ring Two.

You can watch it in two parts on YouTube. Part one:

For those without the time to click through and watch those (15 minutes total), the premise is that the tape has gotten out. Whatever Rachel did with Aidan’s copy, the tape has now gotten around, and the short focuses on a group of teenagers who deliberately a) watch the tape, b) record the weird stuff they see in the days following, and then c) get a friend to watch a copy to continue the ring (though, technically, it’s more of a chain than a ring). There’s some confusing dialogue at the beginning (one guy says something about no one making it past day seven, when he means no one has made it to day seven… without finding someone to watch a copy, that is. But, otherwise, it’s a nice little short that leads quite well into the opening sequence of The Ring Two. And, for good measure, to see how Jake’s story ends, here is that sequence:

Another thing—because of Rings—before I get to my planned topic for today (and before I turn on The Ring (I’m watching Rings again right now): I actually had thought about writing about the power of suggestion coming from the video in The Ring. I mean, for example, the ladder. There’s a tall ladder against a wall on the tape. Rachel leaves Noah’s apartment building and sees a ladder and she thinks (and we think, as well) it connects to the video. In Rings, Jakes sees a ladder in the school hallway and—SPOILERS—no one else can see it (though his video camera can capture it). Without the short, I was going to suggest that Rachel only thought that first ladder she saw was significant. The actual ladder the video referred to—for the American version makes explicit nearly every image in the tape—was in the barn. The first ladder, considering there was a worker there using it, was merely a coincidence. Similarly, other echoes of the tape< such as Rachel gagging and then vomiting out that medical wire and electrode (which turns out to be a dream anyway) could arise directly from the image on the tape planting that image in Rachel’s mind. But, then the ladder out of context of the barn turns out to not only be the first thing Jake sees out of the ordinary within his seven days in Rings but on the website within the short (and in reality), the password in is to answer What is the first thing you see? The correct answer is “ladder.” Go figure.

Fortunately, since I’ve only got a week with this film (and some of the other films surrounding it), I don’t need that power-of-suggestion topic anyway. So, let’s move on.

II – WHY SADAKO/SAMARA LOOKS THE WAY SHE LOOKS

Broadly, Sadako (and then Samara) echoes the titular Okiku from the classic Japanese ghost story of Okiku and the Nine Plates. Okiku is a maid who worked for a samurai, Aoyama Tessan. I’ve found a couple variations but the basic story is the same. Okiku breaks one of the samurai’s family’s prized ten plates (in one version, Okiku refuses advances from the samurai and he only makes it look like she has broken a plate) and the enraged samurai kills her and throws her into a well (not unlike Sadako/Samara). Every night thereafter, she returns to haunt the samurai by either a) crying loudly outside the house or b) counting to nine and shrieking. In the latter version, Okiku may be gotten rid of when a neighbor shouts “ten.”

Roberts’ (2010) Japanese Mythology A to Z tells us about a problem in 1795, in which wells were infested with worms and people started calling these worms Okiku Mushi (Okiku Bugs), suggesting the worms were a reincarnation of Okiku (p. 102). Artist Katsushika Hokusai drew an illustration connecting the two: 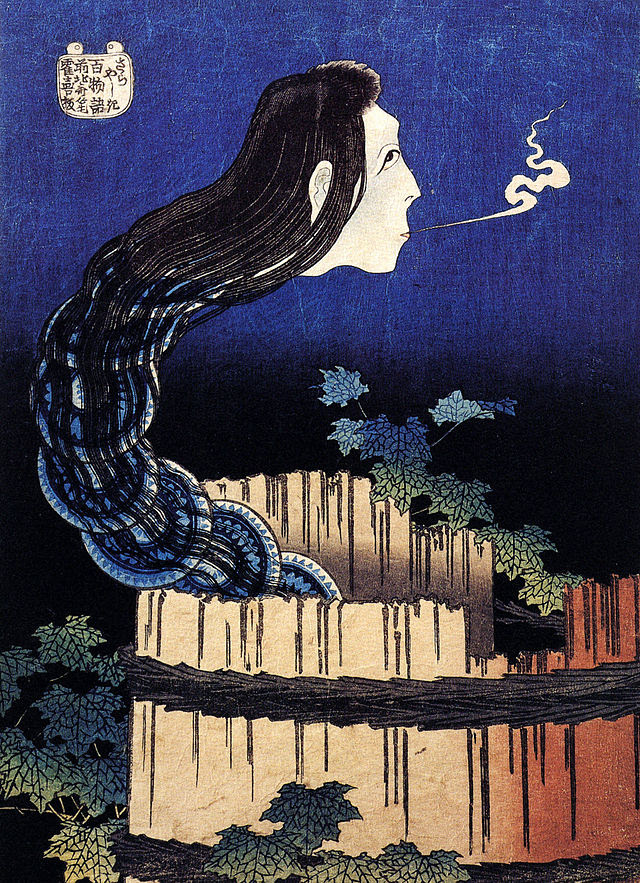 More specifically, Sadako/Samara is a yurei. A yurei is the ghost of a person “deprived of their natural lifetimes” according to Tsai (2008), a person who suffered “a sudden death… murder, death in battle, or suicide” (p. 22). Even more specifically, an onryo is a tormented yurei who seeks revenge, staying among the living. Tsai explains, “Japanese ghosts are eager to prove their existence, to show that ghosts and humans live in the same realm, and that they have an urgent message from the onlooker” (p. 31). The deceased essentially just wants to regain agency taken from them when they were killed. This is notable in light of gender-related issues in the Ring cycle; Japanese women traditionally have a lower status than Japanese men, and there seems to be an almost feminist bent in the onryo; most onryo are women according to Screech (1994, cited in Tsai), and the appearance of all yurei is relatively uniform—they appear like Japanese women in mourning. They are dressed all in white (often specifically a katabira or white, unlined burial kimono). In Shinto, as in many other belief systems, white is symbolic of purity. Samara’s appearance beside the well, just before her mother kills her is that of a girl seemingly innocent, as is her appearance when Rachel finds her at the bottom of that well (before her skin falls away, that is). The long black hair is down because Japanese women let their hair down when in mourning. And a yurei’s hair, more specifically, is usually disheveled. Also, the yurei’s hands hang limp and the lower body is rarely seen; Samara/Sadako do have visible lower bodies, but when they do their disjointed, contortionist walk, their arms do hang somewhat limply. The traditional image for the yurei may come from a specific source, Maruyama Okyo’s painting of what he claimed was his dead mistress’ spirit come to visit him one night.

Onryo and yurei did not always have a uniform appearance. That came from theater. In Kabuki, the ghost costume is a white burial kimono, wild black hair (probably a wig) and white face makeup sometimes with blue fringe like a villain. Blues and greys signify “the stunted and misdirected energies of the evil, villains and ghost” according to Agostino (2011). 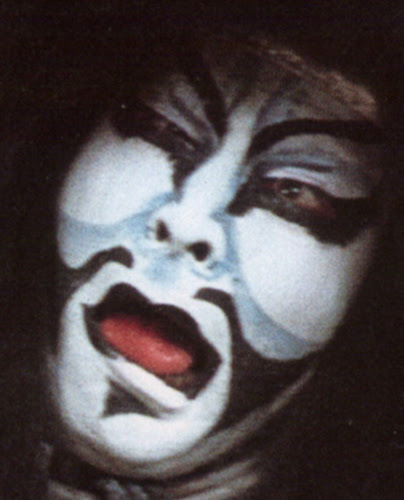 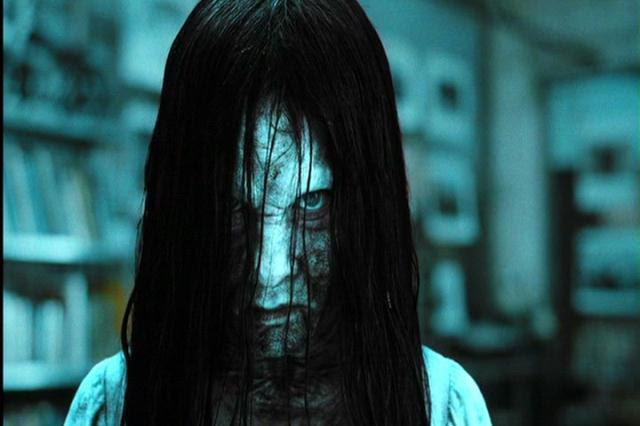 I keep coming back to the feminist thing in my head. I wonder, are most onryo women because women suffer the most? Is the Japanese ghost story a response to its own cultural legacy of patriarchy and paternalism?