it's all a movie. it's all one great big movie

Keeping it (relatively) simple today. Listening to the commentary track with Wes Craven (director) and Kevin Williamson (writer). Right away, Williamson brings up the self-referential nature of the movie, which is obviously a key feature of the film; in the reality of the film horror movies exist, slasher films exist. What works especially well in Scream, of course, is that the self-referential nature, even when funny, even when clever and cute about it, never really drops into self-parody. The movie is played straight. 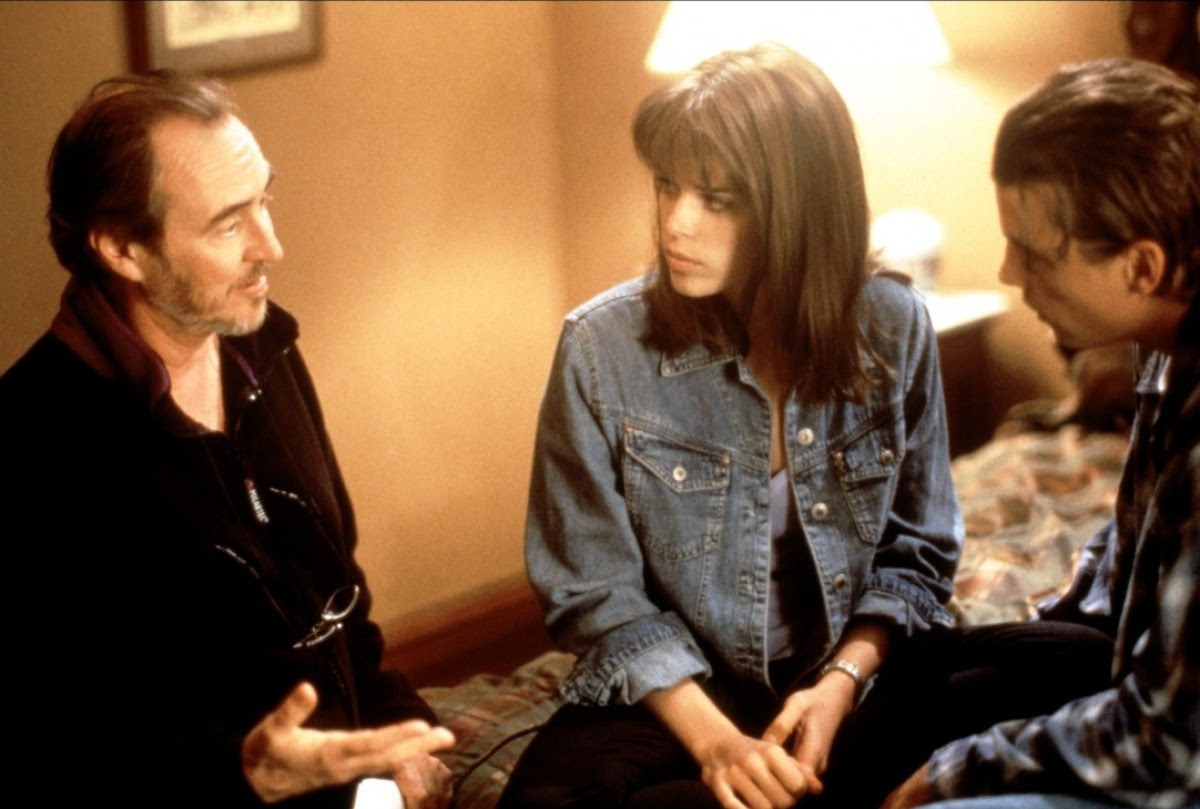 Tidbit: Craven got Barrymore to cry by reminding her of a news story she told him about regarding someone burning a dog.

Tidbit: MPAA censored the amount, I guess (since the intestines are still there) of what we see of Casey’s boyfriend’s intestines hanging out. And, Casey’s intestines.

I mentioned yesterday how Casey takes refuge behind the television. Craven doesn’t reference that but he does say the television being on, with the blue screen, was deliberate, to suggest a video, a movie about to begin.

Tidbit: the closet door blocking the door to Sidney’s (correcting yesterday’s spelling) bedroom was in the script and after a search for houses with that feature, they eventually had to just build a new wall in the house they used to line up the two doors.

Williamson likes that there is no T&A in the movie. I think Sidney showing her breasts to Billy (but not to the audience) is actually rather appropriate not only because of the virginal nature of her character (and there will be a whole lot more on that topic this week) but also because it connects her to Jamie Lee Curtis—as Randy phrases it, “Jamie Lee was always a virgin in horror films. She didn’t show her tits ‘til she went legits.” Similarly, Neve Campbell here is in a horror film and has no nude scene. That would come later.

Tidbit: while the shot was cut for time, Sidney’s location she types into the computer was an Elm Street address.

Meanwhile, while I was typing a paragraph about the mask and those high school students who have it in the film, only to delete the whole paragraph afterward, I’ve missed mentioning the principal as minor red herring and Bill as so blatantly obvious a red herring he couldn’t possibly be the killer.

Tidbit: while Sidney is the virginal character, Williamson points out that Tatum comes across more like a little girl when they are both in Tatum’s bedroom. She’s got the childish pajamas and the big stuffed animal. Sidney, on the other hand, is less little-girly in a long t-shirt (here little-girly outfit was that nightie in the “PG-13 romance” scene).

Williamson thinks Stu (Matthew Lillard) was the most underwritten role in the film, but Lillard made the role better, even ad libbed some scenes.

The principal dies because Bob Weinstein, after buying the script, told Williamson there was a 30-minutes section in the middle of the movie with no one getting killed.

An extra’s reaction that I noticed last night—in the video store scene, behind Randy—Craven says they went through 3 extras to get the right reaction shot, and it’s in the background. That is nice attention to detail.

Randy suggests that motive is irrelevant because it’s “the millennium.” Craven suggest this is a millennium film, because at the end of a century there’s a feeling of things not quite being right. “The technology is not bringing peace and love,” he says. The idea he’s getting at there, in the French, is the fin de siècle.

fin de siècle, (French: “end of the century”) of, relating to, characteristic of, or resembling the late 19th-century literary and artistic climate of sophistication, escapism, extreme aestheticism, world-weariness, and fashionable despair. When used in reference to literature, the term essentially describes the movement inaugurated by the Decadent poets of France and the movement called Aestheticism in England during this period.

It’s silly that we have psychological, well, anything in regards to an arbitrary numbering system, but we do. The end of the century, the end of the millennium—these are meaningful milestones. Like birthdays. Survived another passage around the sun. Or one hundred of ‘em. Or one thousand.

Since cinema was barely more than a century old at the end of that particular century/millennium, it’s strange perhaps that it should become introspective, deconstructionist. Or, maybe it is inevitable. You get old as a person and you reflect on your life. Cinema gets old and films reflect on what has come before. Scream is the middle-aged horror film looking back at the crazy shit it got into in its college years.

The timing of “the obligatory tit shot” and Sidney taking off her shirt was in the script. I figured, but it’s nice to have that confirmed.

Some nice details I’m noticing—i.e. not from the commentary:

The killer who chases Sidney inside her own house early in the film is Stu (hence Billy can be outside the window) and he doesn’t know about her door and the closet door. Billy, her boyfriend, has probably been in her bedroom and would know that.

Similarly, right after Billy is “killed” Sidney goes to another room and down the stairs only to have the killer come to the stairs from a completely different angle—again, that’s Stu, and it’s his house this time, so he knows how to get around..

Randy’s great scene in which he’s telling Jamie Lee Curtis to look behind her and the killer is behind him—he’s saying “Behind you, Jamie” and he is played by none other than Jamie Kennedy. He’s talking to himself using his real name just as much as he’s talking to Laurie Strode but using her real name.

Gale’s crash of the newsvan was a stunt gone wrong. The van was supposed to flip but refused to flip and went straight for the trees.

Stu’s “My mom and dad are gonna be so mad at me” was one of Lillard’s ad libs. Nice.

Gale’s last scene, her news report—they only had 2 takes because of the sunrise, and the dialogue was fed to Courtney Cox just before.

Tomorrow begins my long commentary on Scream, on slasher films, on feminism, on a lot of things.

Oh, and I should start commenting on the sequels as well.