write us a happy ending

Before I get to the topic I intended for this, the seventh day of The Blair Witch Project, there’s something a detail I’ve left behind. When Heather, Josh and Mike find the “cemetery” with the seven rock piles, Heather mentions a story Mary Brown told them about a pile of rocks. We were not privy to said story. As Heather explains in her journal in the Dossier, “I cannot FUCKING remember what she said about that because I was freaking out trying to keep the interview to two mags” (p. 161). Given the brief (but important) bit we get in the movie with Mary Brown, it’s hard to believe that the interview came anywhere close to two magazines (mags). The CP-16mm took 400 foot magazines and 400 feet is 16 minutes, so that would mean Heather would have been trying to keep the Mary Brown interview shorter than 32 minutes. We only see Mary Brown for maybe 1-2 minutes total (I haven’t timed it). Gotta wonder, in the reality of the film, what else they got from Mary Brown.

Anyway, a potential bible verse Mary Brown may have mentioned (though Heather says in the film she thinks it has something to do with Esau, it’s Jacob in this chapter) is Genesis 31:52:

But, that is not what I wanted to talk about today. 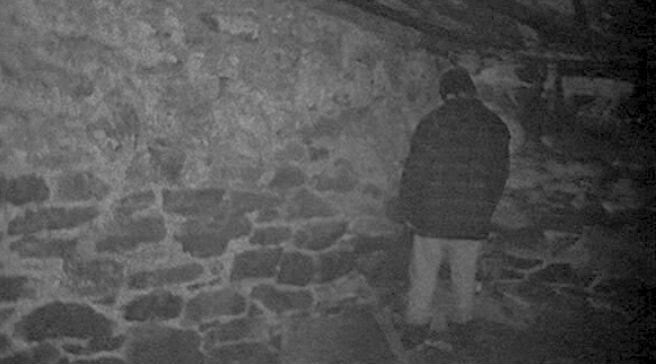 I wanted to talk about the ending of The Blair Witch Project. First, here’s the last page (and a couple lines onto another) of Heather’s journal:

I am losing hope. Actually, I may have lost it. I didn’t think it was possible to be where I am at. Staring. Waiting. I have nothing left to say. Tape Tape Film Film Film. We are being stalked and whatever is stalking us will at least be documented. Please God, let someone find our tapes. Please. To all the people I love, and you know who you are I love you. Simply that, I love you with all my heart and more. If something bad happens to me I will always find you and look out for you and help in any way I can as I sincerely tried to do in my life. To Josh & Mike’s parents—I am sorry. I am sorry for what happened to your sons and to my beautiful babycakes—I will love you no matter where I am. I lack the strength to hold the pen. Hey those last two lines rhyme [no, no they don’t]. Why even [write] that really, it’s obvious, but anything that brings humor is welcome especially now. I want to laugh. I want to laugh. I want to laugh. (Stern, 1999, p. 167)

Presumably, she wrote this in the tent a short time before she and Mike heard “Josh” out in the woods for the second night in a row and got their cameras together and went out into the woods for, apparently, the last time.

So, what happened in that house?

Some possibilities... first let’s assume the Blair Witch is real (at least in the reality of the film). So then there are a couple basic options:

1) Josh was not dead, though he had apparently undergone some painful torture and had at least some of his teeth pulled out. It as Josh, then, under the influence (like Rustin Parr more than half a century earlier) of the Blair Witch, her voice telling him what to do. So he knocked Mike’s camera down then put Mike in the corner—I’ve seen debate on IMDb as to whether or not Mike is a) dead or b) conscious there in the corner, but either way, under this option, Josh puts him there, then waits for Heather to come down and kills her. Then, he kills Josh, then kills himself... except, then what happened to their bodies? There’s another point worth dealing with before moving on to #2. If the Blair Witch was involved, then Carrazco in The Burkittsville 7 is probably not right about Kyle Brody; Rustin Parr killed those kids and the Blair Witch made him do it.

1) Before I get to the obvious suspect, I must cite Keller (2000), who argues that The Blair Witch Project would have been unable to generate a satisfactory viewing had it not been supplemented with additional texts, creating a framework and background for the events depicted on the film” (p. 75). That is, Keller is saying the film not only does not but can not tell us the whole story. And the Dossier tells us (by way of Josh’s girlfriend) that Josh “took a whole bunch of books out from the library on that Witch. He bought a notebook, and started writing stuff down in it all the time. He kept saying how ‘Heather’ would appreciate it” (Stern, p. 86).

(Keller, by the way, laments (my choice of phrasing) in the end of his piece how, “Each time I place a note in the text acknowledging appropriations from A Dossier, I may be perpetuating the Blair Witch’s pageant paraded across the American media” (p. 80).)

So, might Josh have, in trying to impress his friend Heather, gotten a little too involved in the Blair Witch legend, and maybe just like Kyle Brody writing in Transitus Fluvii, Josh was not writing nice, (mostly) coherent English like Heather in her journal. And, maybe each contact with “the Witch” on their venture into the woods was Josh trying to make Heather’s film that much more interesting... except then when they actually got lost and it seemed they might die out there, Josh snapped because in films people do that, they just snap and a minor psychosis or obsession turns to something much bigger. So, Josh, out of his own obsession, augmented by fear and hunger and exhaustion kills his friend Heather and their replacement sound guy, Mike, and then hides the bodies... somewhere, and hides the tapes unde the edge of the foundation because he knows no one should ever look there. And, then he kills himself, to complete the picture or maybe out of guilt, but wherever he kills himself, his body is lost, maybe in some rapids in a larger section of the river, or is eaten by animals, leaving no evidence behind.

Bonus detail: if Carrazco in The Burkittsville 7 is correct about Kyle Brody, then maybe no kids were ever put in the corner; maybe Kyle Brody made all that up. So, it would make sense that Josh, obsessed with the story of the Blair Witch, including Kyle Brody’s story about the kids being put in the corner, motivates the way he kills.

2) The more obvious suspect, you know, because she looks like a witch, duh, is Mary Brown. Similarly to that last point, it would make sense that a crazy local woman who believes in the Blair Witch would go by the stories when she decided how to keep the legend alive. It would not then be a mere coincidence that Mary Brown’s gate at her trailer is sticks tied together, for that is something for which she’s got a talent. And, she uses that talent to make those stick men, and to make that nice gift bundle with Josh’s teeth.

A potential problem with the Mary Brown version of things comes there, though, with the disappearance and apparent torture of Josh. How would she get him out of the tent? I suppose she could have just grabbed him while he went outside to pee. At that point Josh would have been weak from hunger and exhausted from hiking, so she could have overpowered him physically if she didn’t just drug him in some way.

The film does not give us a motivation for Mary, but it does tell us that she is considered to be crazy. The old local man being interviewed mentions “this old woman by the name of Mary Brown.” He says, “she was kinda crazy.”

Heather: “How was she seen by the community?”

After they have left Mary Brown, Josh says, “Thank God she’s not in the film business. Can you imagine?”

Heather: “She thinks she is in the film business. She also says she’s a ballerina... She says she’s a historian writing a book on American history... And, she says she’s a scientist who does research at the Department of Energy.”

Mary is a) apparently crazy—in the Dossier she claims to have seen an apparition of Josh in December (he disappeared in October), and b) believes in the Blair Witch. In cinematic terms, that’s motive enough.

And, really, that’s all I have to say about that.

For the record, by the way, I think the film tells a complete story itself. Despite Keller, you don’t need the supplemental material. The basic claim that the footage is real comes from the beginning of the film. Considering the movie made close to $150 million domestic, 250 worldwide, I would wager that most of its audience never saw any of the supplemental materials. And, you all did just fine.