only he who is pure of heart

I was talking about mythology.

As I mentioned near at the end of yeterday’s entry, Harty (2000) calls “the Arthurian myth… central to the plot of M. Night Shyamalan’s The Sixth Sense” (p. 57). He compares Cole Sear to King Arthur, pointing out the obvious allusion in the second of the two school plays we see in The Sixth Sense, in which Cole now has the lead and the braggart child actor Tommy Tammisimo plays the village idiot…

(It’s worth pointing out here that there is no internally logical reason for this reversal of roles. We in the audience don’t like Tommy, sure, but the movie has not told us he was cast in the prior play because of his one professional acting job or that Cole has any acting ability himself. Not that elementary school plays are built on great acting. We may assume that Cole got the lead because he has gained new confidence with Malcolm’s help, and that seems to be the intent of the scene; it just bugs me that Tommy’s character even exists here, since his only purpose is to counter Cole in this way, and to be the butt of the joke in this scene.

Interesting sidenote, Tommy’s role in the earlier play was as Dr. Dolittle (or someone like him) who can talk to animals. On stage, he can communicate with beings no one else can, just like Cole can off the stage.) 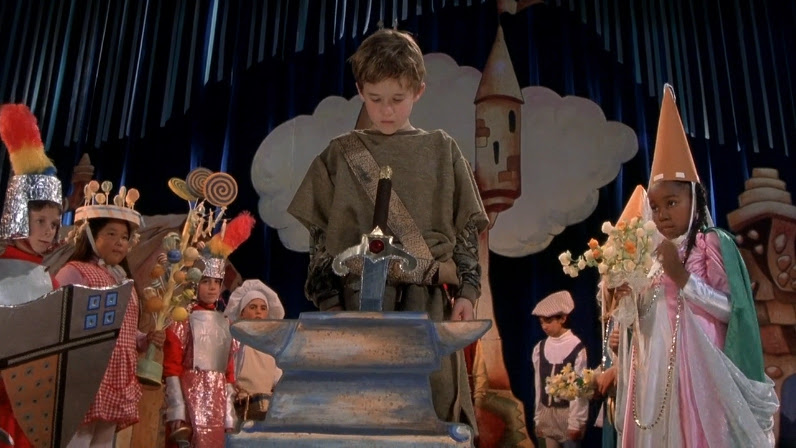 Cole is presented here as King Arthur… at the moment of becoming king, becoming important, becoming powerful. This comes on the heels of Cole, with Malcolm’s help, accepting a new role with his ability to see the dead—he knows now what he can, and presumably must, do to make his life easier. Harty (2000) describes the situation:

Having confronted his fear, Cole seems changed and finds himself cast in the central role of a school play. … As an announcer solemnly intones, only the pure of heart can take the sword from the stone,' Cole as the boy Arthur easily pulls Excalibur free. Cole is cheered by his classmates who carry him on their shoulders in triumph. Malcolm and the other members of the audience join in the acclamation for what is clearly now a reborn Cole. (p. 59)

Cole and Malcolm then meet for their last session, in front of a faux medieval stained glass window. As Cole waves Excalibur in the air, he tells Malcolm to talk to his wife when she is asleep so that she can listen to him ‘without hearing.’ Patient and doctor have clearly switched roles here. Cole as Arthur has healed himself and will soon heal others. (p. 60)

Harty takes it further, getting into more of Arthur than just the idea of him healing… Harty writes:

The Sixth Sense, a film that on its surface seems far removed from the world of Camelot, nonetheless marks an Arthurian return. The boy Arthur returns, here as Cole Sear—whose surname surely cannot be accidental

—to heal himself, to heal his mother, and, most importantly, to heal Malcolm Crowe… He also has a connection to the once and future since Cole helps the dead, haunted by their pasts, and he uses his ability to communicate with the past to lay out the future for himself, for his mother, and even for Malcolm, who initially also serves as a kind of Merlin figure—a supernatural guide, it turns out, who helps Cole to understand the unique role he is called upon to play. (p. 61)

Harty misses some important bit of imagery in The Sixth Sense, though, that evokes Arthurian myth but not King Arthur himself. Malcolm Crowe is wounded in the opening sequence of the film, a wound in his side. On the one hand, this seems like a Christ-Figuring wound, but Kozlovic doesn’t even include stigmatic wounds in his Christ-Figuring scale. The other obvious allusion with a wound to the side would be the Fisher King from Arthurian myth (the obvious ties between the Grail story and Christianity notwithstanding).

The Fisher King is the wounded king who occupies the Grail castle. The land around this castle is in ruin as long as his wound remains unhealed. He has different names in the works of different authors—Chretien de Troyes does not name him in Perceval but Wolfram von Eschenbach names him Anfortas in Parzival, Robert de Boron identifies him with Hebron or Bron, Joseph of Arimathea’s brother-in-law

(Oddly, enough, I only noticed tonight in my Arthurian Encyclopedia (from which some of these details come) that Galahad is a descendant of Joseph of Arimathea.)

while Sir Thomas Malory called him Pellam or Pellehan or Pelles. 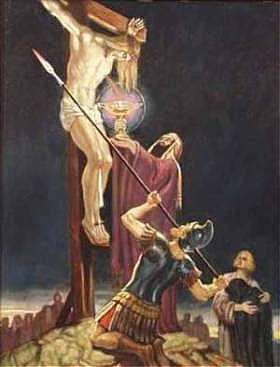 Andrea Hopkins (1994), taking her cue from Malory, writes of Galahad’s healing of Pelles in Chronicles of King Arthur:

…Sir Galahad went to the Holy Lance and dipped his fingers into the blood; with it he anointed the wounds on the legs and body of King Pelles, the maimed king. And the king was healed in that instant and leapt from his bed, crying, ‘Thanks be to the Lord God, for I have so long waited for Your coming in pain and torment, and now my suffering is over, and I am healed through your hand.’ (p. 141)

(That “Holy Lance” is the Spear of Destiny, Longinus’ Spear that made that wound in Christ’s side referenced above.)

Malcolm Crowe is wounded in his side—that is his physical wound. But, to sound a little cheesy for a moment—the wound that Cole Sear heals for him is in his heart. He has failed at least one of his patients and Cole is his second chance to get that right. This makes Cole the Galahad to Malcolm’s Fisher King.

It is also interesting that the Fisher King’s wound is not always described as being in his side but rather in his thigh, generally taken to be a euphemism for his genitals; that is to say, he has been wounded in such a way that he can have no children. Malcolm Crowe had no biological children but he is a child psychologist which means he cared for many children on a regular basis.

(Notably, perhaps, the award he has received at the beginning of the film refers to him as a “son” to the City of Philadelphia.)

But, he never had any children of his own, and at least one of those he cared for, he failed. Into his life—or rather, into his death—comes Cole Sear, a boy without a father who needs Malcolm’s help. So, just as Lynn Sear’s story is about her trying her hardest to be a good mother to her very troubled boy, Malcom’s story essentially come down also to a parental role, though he and Cole heal each other.

In Malory’s story (by way of Hopkins), the ceremony at which Galahad heals the maimed King Pelles, includes (seemingly) the very presence of Christ himself come to feed the Grail knights Galahad, Perceval and Bors. It’s a strange mix of Christ and Christ-like characters (both the Fisher King and Perceval), and Galahad both receiving the blessing of food from Christ and in turn offering a blessing (and healing) to King Pelles. Long story short, Galahad, like Cole Sears, is both being blessed and blessing another at the same time.