You probably are familiar with the opening to Scream even if you haven’t seen it. A phone call, a quiz about scary movies, and death. Casey (Drew Barrymore) notably takes refuge a couple times behind the television. This in a film that invokes the trappings of both modern technology and horror films (i.e. content you might watch on that television). Billy (Skeet Ulrich) refers to his and Sydney’s (Neve Campbell) relationship as... well, here’s what he says:

Before he leaves her house, Sydney offers him a PG-13 relationship and opens her nightgown to show him her chest. We don’t see it, though. The characters are blurring the lines between film/television and (their) reality, but not necessarily blurring the lines between their reality and ours. Sure, they talk about the same horror films we all have seen, but that just means their reality is similar to ours, very similar to ours.

The point is, the Scream “trilogy” deals in hypertextuality; it never acknowledges that it is a film, but it is constantly referencing the cliches of horror films, the slasher subgenre in particular, which turn out to be quite apt within the reality of the film. Wee (2005) lists the conventions of the slasher film:

And, of course, there’s usually nudity and/or sex, and the ones who have sex usually die. The dangers of premarital sex make for an obvious but pervasive subtext. They also tend to have a short timetable for their events—this suggests a comparison between the slasher villain and a spree killer more than a serial killer, actually.

And watching the movie now, I must say, I forgot how much of a dick Billy is, telling Syd she needs to get over her mother’s death.

I can appreciate Wee’s (2005) argument that postmodern (or what she calls “hyperpostmodern”) horror films were inevitable once technology (i.e. video) meant older horror films were readily available. Familiarity breeds commentary.

Watching the original Scream which I haven’t actually seen in a while, I’m noticing something. Two scenes with Sydney and Tatum (Rose McGowan), we see the killer in his costume. There is no reason for the killer to be stalking Sydney like this, risking being found in the open in that ghostface costume, except, well, one particular reason—to mess with the audience, so maybe I spoke to soon in suggesting the lines between the reality within the movie and our reality is necessarily left intact. Wee does suggest the postmodern narrative involves “a breakdown of boundaries” (p. 46). Given who the killers are—oh, SPOILERS—there is absolutely no reason either one should be following Sydney around town in costume. The costume is not inconspicuous. So, it’s there to suggest that, well, it is not a costume, but something more like Michael Myers’ white mask and mechanics’ jumpsuit, or Jason Voorhees’ hockey mask, Freddy Krueger’s striped sweater (or his knife-fingered glove for that matter)—these are less costumes and more uniforms. 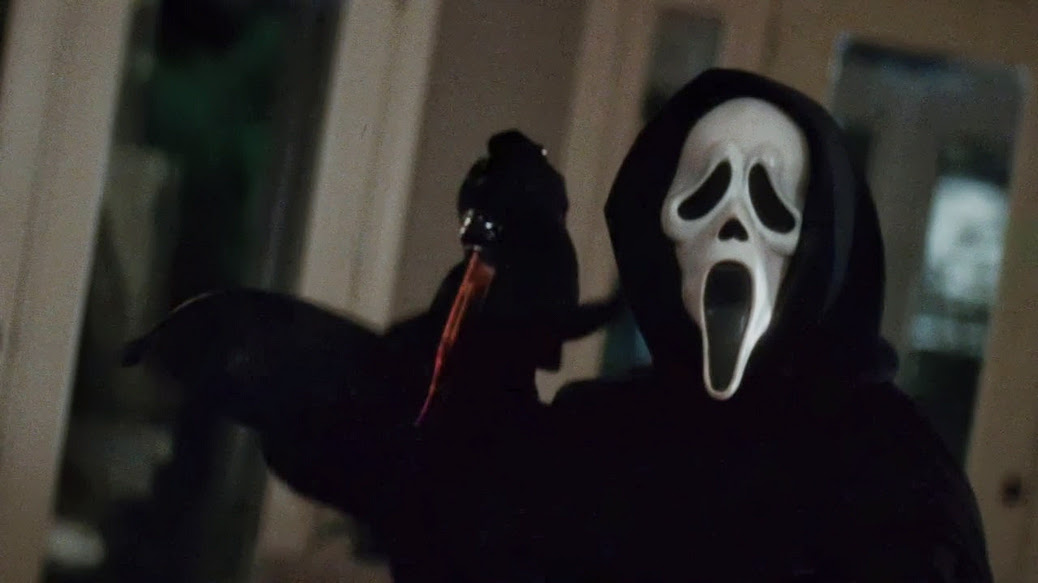 That distinction matters, especially in this case, because the ghostface and the black robe is a costume if someone is donning it specifically to kill people (as turns out to be the case), and it’s a uniform (or even a part of the killer; see Jason’s mask in Jason Goes to Hell: The Final Friday for example) if it is the only thing (essentially) that the killer wears because the killer is more a force of nature than an individual person exercising his murderous agency. Here, the costume showing up around town like that (hiding among trees then hiding in the aisles of the store), suggest something more than just a costume. Given the ending, it is not more than a costume, so these shots exist only for the audience, only to suggest a supernatural killer like Michael Myers or Jason Voorhees. In the reality of the film, there is no expectation of the supernatural. But, in the audience, there is.

Scream represents not a resurgence of the slasher film, a genre mostly left behind in the 90s, but a reconstruction of it. The Scream trilogy works to reinvent the slasher film by subverting it, invoking it, and ultimately reifying everything about it.