i have been stabbed, shot, poisoned, frozen, hung, electrocuted and burned

Before I get into the topic for today, the first recap of the new iteration of this blog:

(By the way, here are links to all six recaps of the first year—the Groundhog Day year:

Phase Two of this blog began with a week of The Ring. Day 1 (366) – seven days established the new format for the blog while, in trying to generally review The Ring I got stuck on the “message” of the movie regarding television. That topic continued into Day 2 (367) – i hate television and into Day 3 (368) – how far down do you think it goes? Then, I got into the “anti-romanticization” (though I didn’t coin that term yet) of the small town in Day 4 (369) – everything sheltered, protected and comfortable. Day 5 (370) – she just wanted to be heard mostly deals with the physical appearance of Samara in The Ring in relation to the Japanese original and Japanese ghosts. Day 6 (371) – pick a card, any card uses tarot cards to explore the story and characters in The Ring. And finally, Day 7 (372) – before you did you see the ring breaks down the screenplay structure of The Ring.

The next film was The Sixth Sense. I began with a basic review in Day 8 (373) – that isn’t magic. Day 9 (374) – you have to add some twists and stuff deals with the twist ending of The Sixth Sense and the existence of characters and stories beyond the boundaries of a particular film. Day 10 (375) – used to tell you bedtime stories is mostly sidetracked by Shyamalan’s Lady in the Water in introducing the presence of mythology in The Sixth Sense which really gets discussed in Day 11 (376) – only he who is pure of heart, specifically references and allusions to Arthurian legend. Day 12 (377) – listen to them references Groundhog Day, Siddhartha, The Sixth Sense and tarot cards to explore the times in life we get stuck. Day 13 (378) – a part of themselves gets printed on those things deals with the role of video and audio recordings in The Sixth Sense and finally, Day 14 (379) – de profundis clamo ad te domine measures both Malcolm Crowe and Cole Sear as Christ-Figures.

The third film in Phase Two was The Blair Witch Project. I started with day 15 (380) – she keeps leaving shit outside your door is a brief (I was sitting at a picnic table behind my tent while camping at the time of writing) review of the film coupled with photos of the stick figure men I made and left around our campsite. Day 16 (381) – this is a very important book deals briefly with watching the movie while camping before moving on to some of the supplemental material, particularly the book The Blair Witch Project: A Dossier. day 17 (382) – have you heard of the blair witch? gets into the detail of the Blair Witch legend and also the “real-world” Bell Witch of Tennessee. Day 18 (383) – you’re still doing your documentary thing deals with some behind-the-scenes details as well as the supplementary documentaries, Curse of the Blair Witch and The Burkittsville 7. Day 19 (384) – it’s not quite reality deals with the tropes of the found footage film. Day 20 (385) – it was like a woman is both an indictment of Book of Shadows: Blair Witch 2 and of sexist gendering in either Blair Witch film. Finally, Day 21 (386) – write us a happy ending deals with several potential interpretations of the final scene of The Blair Witch Project.

The fourth film was Scream. I began with Day 22 (387) – like something out of a horror movie is a brief introduction to the hypertextuality of the film. Day 23 (388) – it’s all a movie. it’s all one great big movie deals with the commentary track with Wes Craven and Kevin Williamson. Day 24 (389) – some stupid killer stalking some big breasted girl who can’t act starts exploring the subtext of the slasher film (the psychosexual fury of the killer, the virginal Final Girl, etc.), which continues into Day 25 (390) – i’m not randy, delving into masculinity, femininity, hegemony, patriarchy and violence, and into Day 26 (391) – nice solid R rating on our way to an NC-17, linking horror to pornography, and Day 27 (392) – my mom moved out and abandoned me, which gets into the so-called breakdown of family values and the conservative worldview of the slasher film. Finally, Day 28 (393) – watch a few movies, take a few notes offers some last thoughts on Scream and slasher films (for now).

And, then there was Groundhog Day again today. And, the topic is obvious given how many words have been spent on it lately. Phil as figurative slasher, Rita as Final Girl… 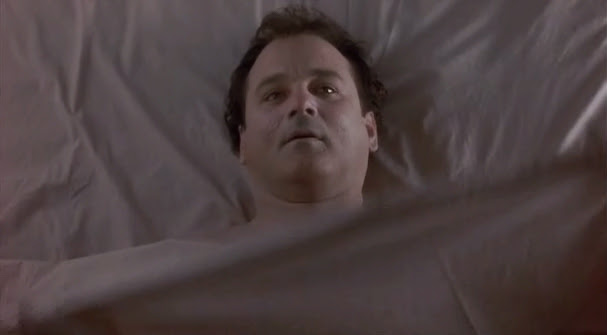 First of all, it hasn’t even been a whole month since I last watched this movie. I must say that a) don’t think I have missed it and, on the other hand, b) it seems like only yesterday I was watching it. I guess it takes a long time for a year-long experience to wear off. If Billy Loomis is killing people over his mother leaving a year ago and Sidney is still barely dealing with her mother’s death a year ago and Malcolm Crowe has been ignoring most of his day to not recognize his only ghostliness for a good chunk of a year (I realized as I went to use him as an example that we don’t actually know how long he’s been dead, not specifically), if those Montgomery College students’ footage can be found after a year and spark a story we’re still following decades later, I think it is safe to say that one year is a big deal, and trying to get over it quickly—well, that’s just silly.

I do keep finding myself just watching the movie, though, making it hard to type. I’ve got Clover (1987) open to the left of my iPad but the TV is to the right. The right keeps winning my attention.

In films of the Psycho type (Dressed to Kill, Eyes of Laura Mars), the killer is an insider, a man who functions normally in the action until, at the end, his other self is revealed. Texas Chain Saw and Halloween introduced another sort of killer: one whose only role is that of killer and one whose identity as such is clear from the outset. Norman may have a normal half, but these killers have none. (P. 196)

Phil Connors is clearly more the Norman Bates type than the Michael Myers type. For two acts, he is one kind of guy, then in the third act, his “other self is revealed.” Clover describes the second type as “usually large, sometimes overweight, and often masked... recognizably human, but only marginally” (ibid). Phil is none of these things... well, he is recognizably human, and given his sarcasm and his sardonic wit, maybe he is marginally human, but not in the way Clover means.

Now, recall this bit from Harold Ramis’ second revision of the Groundhog Day script (which I have quoted more than once):

Rita also calls “The whole secretarial pool... a Phil Connors recovery group” (p. 70). This description of Phil doesn’t make it into the movie, but it is not inconsistent with what we know of pre-loop Phil. Phil’s womanizing doesn’t go as far as the “psychosexual fury” of Clover’s killers, but it certainly positions Phil as a man driven by his sexual desires and clearly unable to satisfy them. In Rubin’s original script, Phil describes one of his projects once he’s inside the time loop:

PHIL (V.O.)
Of the sixty-three eligible women in Punxsutawney, only forty-nine have so far been—accessible. The last few are proving more of a challenge. (Rubin, 2012, p. 37).

Phil is systematically working his way through the women of Punxsutawney. By the time we get to the final film, we only see a little bit of this process—Nancy Taylor, high school crush; Laraine, French maid costumed date; (and for a long shot) Florence Lancaster, nice old widow Phil at least kisses once if nothing else. Structurally, these women function like the victims in a slasher film. Nancy not only puts out on the first date but is open to a marriage proposal—far from the virginal girl who gets to make it to the end of Phil’s story. Laraine is seen so briefly that all we have to remember her by are two details: 1) she is dressed like a French maid, a specifically sexualized costume in our culture and 2) she is submissive to Phil in that she calls him not by name but by the hypermasculine nickname Bronco.

(In a nice coincidence, I wrote that last line and then the movie theater scene began.)

Now a stretch. More than a few times (on the IMDb board for the film, for example) I’ve seen the suggestion that Ned is a) gay and b) is either pursuing his high school crush or trying to Phil Connor Phil Connors. That is, he’s lying about knowing him in high school in order to get him back to his place and see what kind of noises Phil makes when he “gets real excited.” Combine the implications here with Phil’s hugging Ned late in the film—and Ramis’ description of Ned’s response as “homophobic shock”—and, well, I would have to suggest Ned as another one of Phil’s “victims.” Each of the people he interacts with on the way to Rita, his Final Girl, are victims. They aren’t, of course, victims of violence but of something... else.

Rita’s line from Ramis’ second revision continues like this:

RITA
Not if I was dying and your breath was the only cure; not if having your child was the only way to preserve the human race. Just get it out of head because it is NOT GOING TO HAPPEN! (p. 41)

Talk about virginal. Clover (1987) tells us the Final Girl is “intelligent, watchful, levelheaded” (p. 207). It’s notable that in earlier drafts Rita follows Phil along as he performs all his chores on the final day of the time loop because, as Clover explains, “By the end, the point of view is hers.” We certainly are a little bit separated from Phil’s POV on that last day; we are not privy to all the information he has gathered since his string of deaths. We watch, as Rita does in the earlier drafts, amazed at each feat. And, amazed to see that Phil has changed.

The thing is, that third act transformation doesn’t fit the killer’s story per se. The second act ended with the big confrontation between Phil (the killer) and Rita (the intended victim), and she defeated him. Since most of the deaths here are not literal (though, arguably each resumption of the day is a little death for Phil and each new day is like a sequel/remake), Rita doesn’t kill him. But this is the point in the film that brings Phil to more literal death. Act Three, then, is what happens after the final reel of a slasher film, if you let the killer live. His psychosexual fury is doused and he moves on to better pursuits. Imagine Jason Vorhees or Michael Myers turning to the piano or Freddy Krueger trying his hand (and glove) at ice sculpting... or Leatherface for that matter—he’s already got the chainsaw.

One last thing: Clover insists that the ending of the slasher film is the Final Girl becoming more masculine as she turns against her attacker. In Groundhog Day Rita becomes more masculine by buying Phil and going to his place not because he has tricked her into going there but because she has chosen to. Benesh (2011) calls Rita “the ‘feminine mirror’ of the male protagonist” (p. 117). This fits right in with Clover’s interpretation of slasher films.

Or maybe this is every film that involves men and women together in one storyline, the horror film, the romantic comedy, the romantic drama—the male must push his way through woman after woman until one women gets him to change, feminizing him so that doesn’t just act on his sexual instincts.

Today’s reason to repeat a day forever: though it may be wrong, to kill a whole lot of people (figuratively) until I find my Final Girl.