The Sixth Sense is all about the twist. That is what everyone remembers, even those who haven't actually seen the film. But, I'd like to start my week of The Sixth Sense by reviewing the movie for itself. Mendelson (2014) reminds us, "The Sixth Sense is really about a mother and son learning to communicate [which leads us right out of talking about The Ring for a week] and its real climax, a heart-to-heart conversation in a car, is a heartwrenching powerhouse that would have rendered the film an absolute triumph even without any kind of twist ending."

(Another interesting link between The Ring and The Sixth Sense is that not only do we have a single mother and her son at the core, but in establishing that particular relationship/setting, we get the mother in a state of (semi-)undress, walking around the house, a sort of visual shorthand for a certain working-class, small house, tight-knit family closeness that tells us without dialogue that this situation--the single mother household--is a lived-in thing, not necessarily new and, though the film may be about this situation, it is not about the first steps into it but some step later on down the line, a secondary or even tertiary understanding of the situation.) 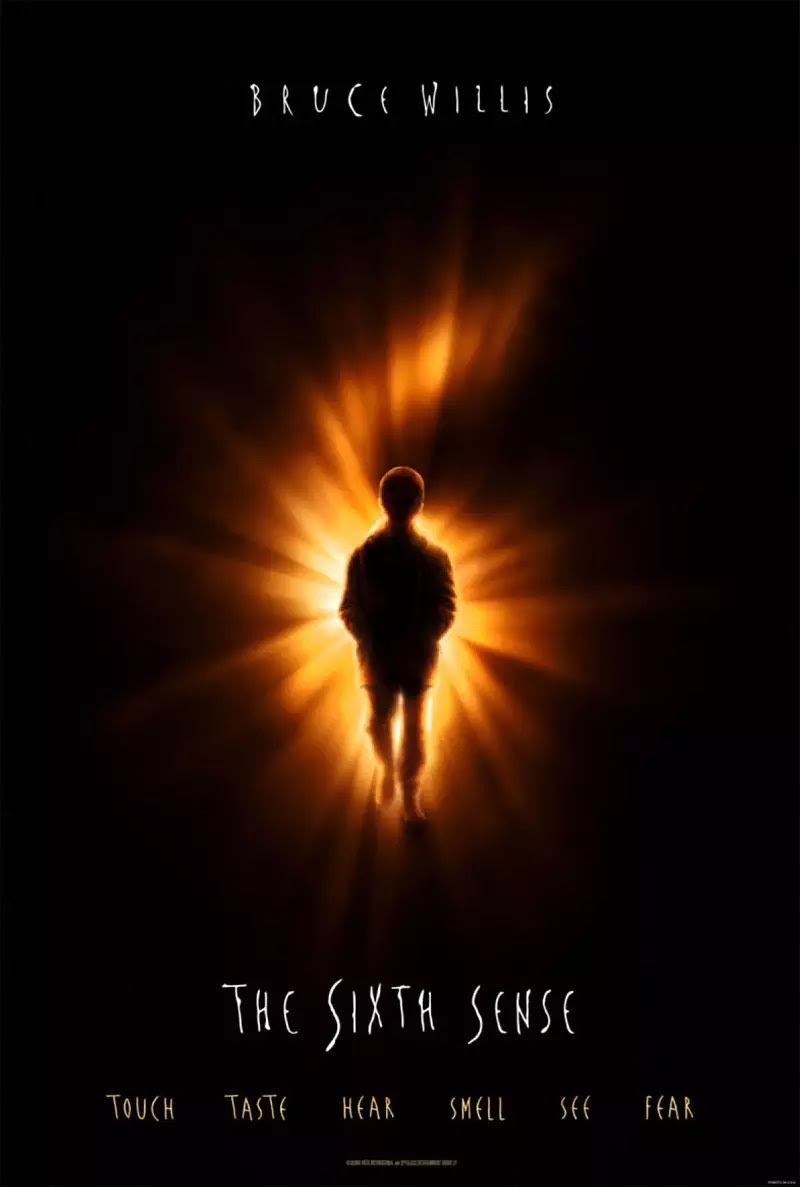 Shyamalan pulls some great performance not only out of Toni Collette as Cole's mother, Haley Joel Osment as Cole Sear (both Osment and Collette were nominated for Oscars), Bruce Willis as Malcolm Crowe, even Donnie Walhberg as Vincent Gray, the patient Malcolm failed years ago who comes back to shoot him in the opening sequence. In fact, the performances may be the best part of The Sixth Sense, better than Shyamalan's direction or writing.

Shyamalan also manages some interesting shots throughout the film, some trite in retrospect but that really work on initial viewing; case in point, in that opening sequence, Malcolm and his wife are literally reflected in his award from the mayor. Shots of, say, the dining room table with only one place setting evoke one thing on initial view and another after the twist; in fact Shyamalan uses his twist remarkably--hence that being the defining detail of The Sixth Sense in our cinematic memories--giving us scenes onto which we place meaning only to realize later that those scenes didn't mean what we thought they did.

It's notable that many of the scenes work that same way for the characters--Lynn Sear and Malcolm Crowe cannot see the same dead people that Cole sees, so the open cabinets and drawers, for example, suggest Cole's inexplicable misbehavior, but we can assume that after the conclusion of the film Lynn understands what was really going on, just as we can. We know something is wrong--and if we've heard anything about the film beforehand, we know what's wrong with Cole at least, if not Malcolm--but the film doesn't focus on the action but rather the characters' reactions. In that open cabinet scene, for example, the core of the scene is really the emotion; the cabinets create a mystery for us and we know they are important, but the key to the scene is Lynn's immediate response to Cole, to ask him what he was looking for, and to let him know she's not angry with him, or more specifically, "I was not thinking anything bad about you." The point to the scene is in establishing the relationship between Cole and his mother, not in establishing the ghosts surrounding Cole; that purpose is there but it is secondary.

Really, that is what makes The Sixth Sense great--Shyamalan allows the plot to exist beneath the story instead of explicitly on top of it, if you get my meaning. Roger Ebert (1999), reviewing the film, says quite rightly, The Sixth Sense "has a kind of calm, sneaky self-confidence that allows it to take us down a strange path, intriguingly." Essentially, he's getting at the same thing I am--Shyamalan has a sense of direction that gives us scenes and makes us figure them out rather than explicitly telling us what to think... the reversal of this direction is the primary problem with, say, Lady in the Water or The Happening, two of Shyamalan's later films. I'm tempted to say--and if you've followed my blog for a while, you know I don't often assume meaning in reality--that Shyamalan was meant to make this one film, and everything else in his film career has simply been a series of footnotes to The Sixth Sense. A less kind way to put it would be Busis' (2014) suggestion that "Most of Shyamalan's post-Sixth Sense projects aren't movies; they're elaborate, pompous setups built solely for the sake of disappointing payoffs."