a part of themselves gets printed on those things 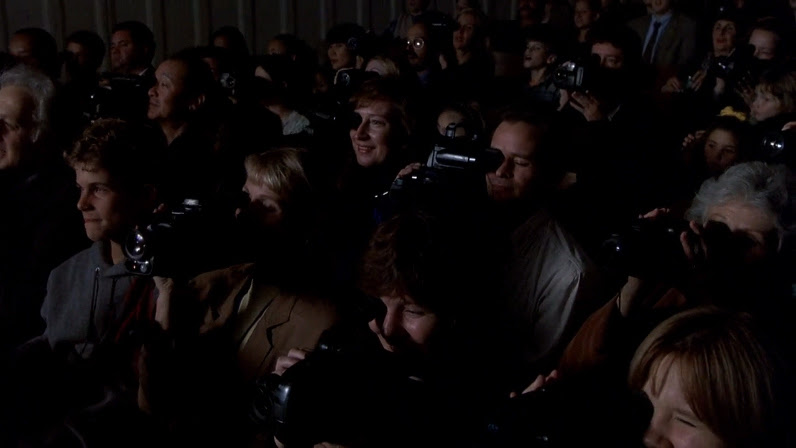 The Ring is not about, but definitely includes a theme about the ubiquity of technology, especially the television and video tape. So much so that I wrote about that topic for 1 2 3 out of the 7 days allotted to that film last week. The Sixth Sense is even less about technology, but the film definitely has something to say about video tape, about recordings (both video and audio) made by technology and about memory.

Memory does not work like a video tape,” the British Psychological Society

(probably Elizabeth Loftus, Professor of Psychology and Law at University of California, Irvine, but the brief piece cites her indirectly at best.)

points out, which is something we know but maybe not something we ever think about. Video tape, the British Psychological Society continues, “is rather constructive and reconstructive.” Memory is altered each time we access it, updated with new thoughts, new feelings. Just like I said yesterday, we are no more the same person each time we access a particular memory than when we watch a particular movie, or wake on a particular day. Arguably, video tape can actually stagnate the process by which we change over time. Anna Crowe, in The Sixth Sense, is deliberately holding on to the past by putting on that wedding video, falling asleep to it, letting an idealized version (not to suggest that her wedding, or even her marriage, was an unhappy one) of one past event fix her in place emotionally. 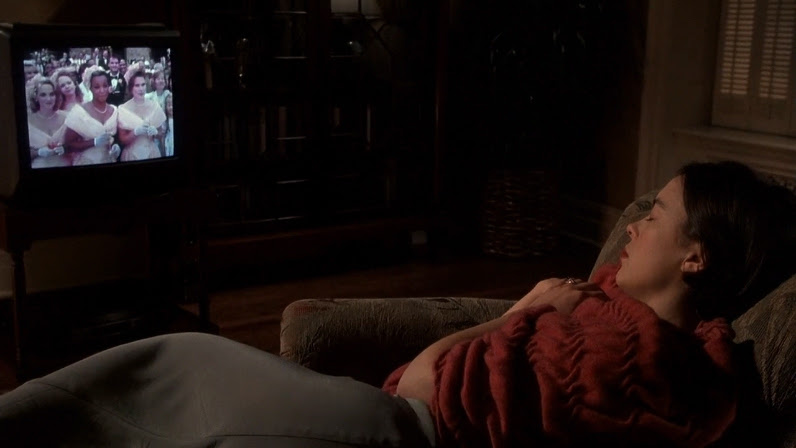 That wedding video is not the only recording that serves an explicit purpose in The Sixth Sense. The girl made sick by her mother—Kyra Collins (Mischa Barton)—she regularly records her puppet sessions 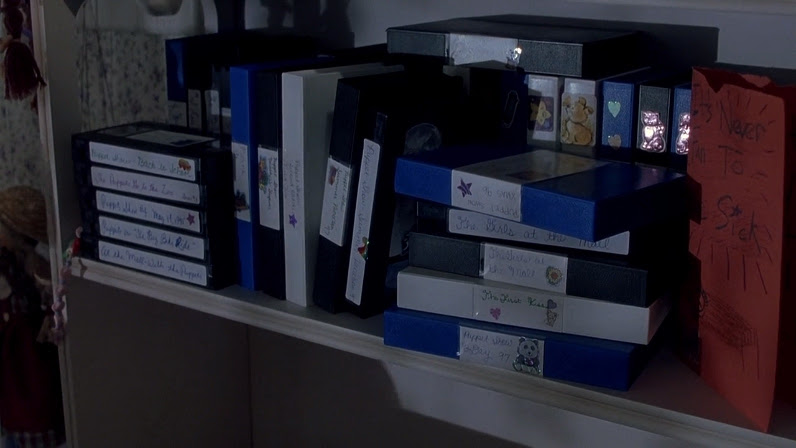 and one of those videos ends up proving her mother’s guilt. 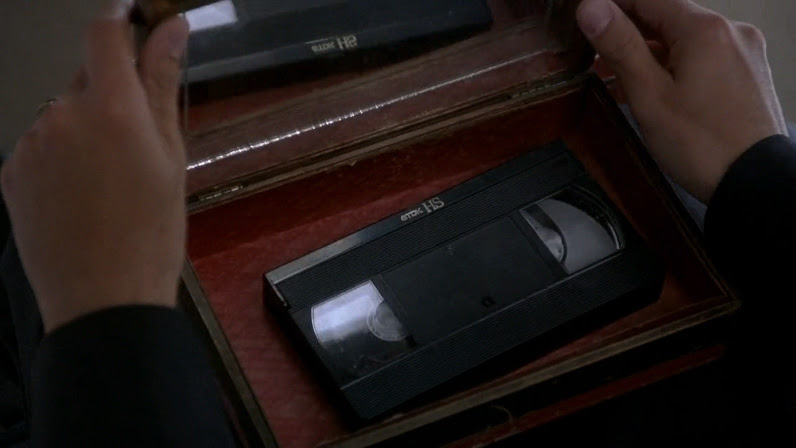 (By the way, if you want to see the content of that video—altered by me, of course—click away. I’d embed the video but that option has been disabled on behalf of one of the copyright holders.)

In a lesser scene, Lynn Sear notices an intriguing gleam in photos of her son— 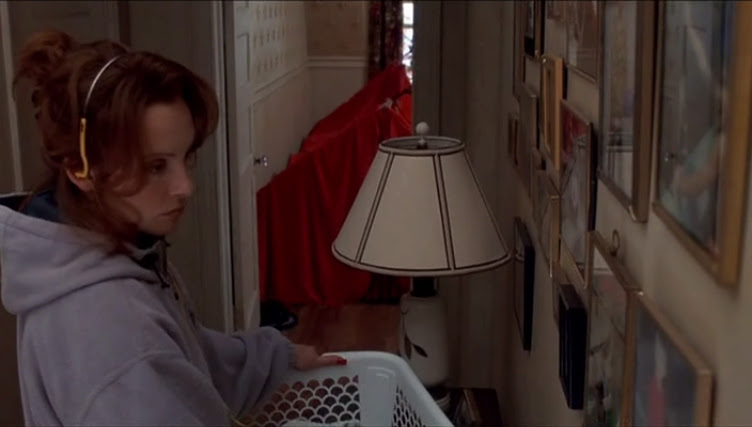 —which is actually a strange scene, worthy of its own blog entry if I had more time with this film than I do. As it is, I will just point out a few odd details: 1) why were so many ghosts sitting near Cole just as his photo was being taken? 2) if there were ghosts near him in all of these images, why does he seem calm? 3) if he is calm because, say, the ghost here is the same ghost in each shot—i.e. his grandmother—then why is she not around all the time, able to comfort him when other ghosts are troubling him? I mean, if he could tell anyone about his ability, I’m guessing his dead grandmother would be an appropriate choice.

Actually, on the subject of photographs, another odd details in The Sixth Sense comes to mind. Kyra’s little sister, we see her twice. She sits in a swing outside her house, her back to the camera, to us. We do not see her face except in a family photo on the wall inside. 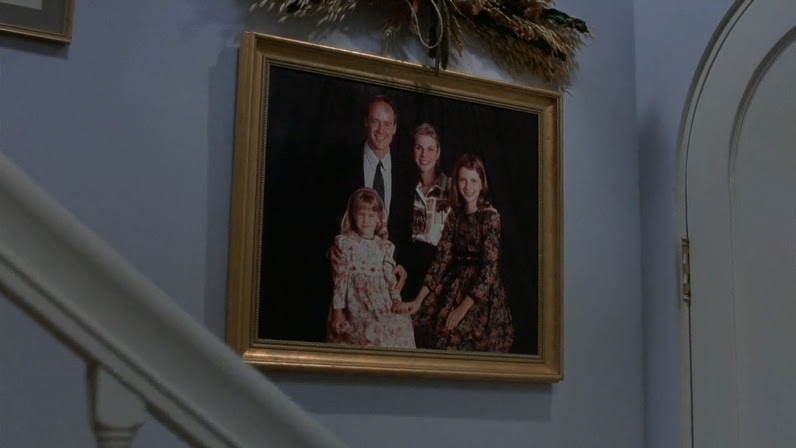 She even has dialogue the second time we see her, after Cole gives her one of her sister’s finger puppets. Yet, she has no face. Not sure why. That black woman in the wedding video—she’s got more screen time and we see her face, but Kyra’s sister, one of the people Cole directly helps—nope. 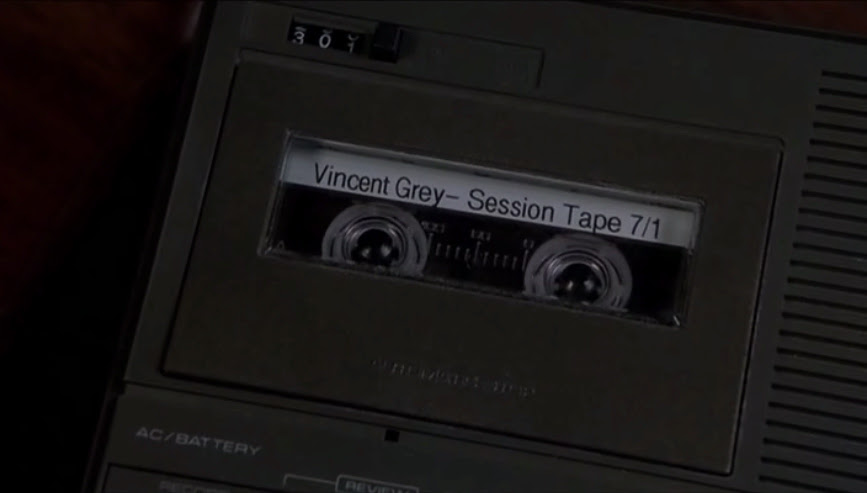 Anyway, audio tape also affects the plot at one point. Malcolm has effectively given up on helping Cole until he listens to an old cassette recording of a session with Vincent Gray. That he just happens to listen to the exact right recording to catch a ghostly voice is very serendipitous, but then again, so is the idea that either Malcolm or Kyra have found Cole at all. Regardless of the luck, though, that recording serves to pull Malcolm backward in time to that session with Vincent, to be there in that room again (not literally, of course) but to experience it anew. Malcolm has changed since then, and he has seen just enough with Cole to be willing to suspend his disbelief long enough to pay attention to that recording.

Tsushima (2006) cites Augustine’s “idea that memory is different from the mind” or, as I’m putting it, that there is a difference between who we may be and what we can remember of how we came to be, and also Augustine’s “idea that memory is a stomach for the mind, and the act of remembering resembles that of ruminating, or chewing food over again” (p. 124). Tsushima calls a recording “a container which holds past sensations and images” (p. 126). The key difference then is that ruminating on an old memory, like chewing old food again, involves also the flavors that have come to us since. A video tape (or other recording), on the other hand, is an attempt to bypass those newer flavors, to taste the happy wedding instead of the guilt of wanting to move on to a new man, for example.

All of this moves to another level when we consider how the film itself works on us. Briefel (2009), quoting Morris Dickstein, suggests that film neutralizes our anxiety—our anxiety over death, in particular—“by putting an aesthetic bracket around it” (p. 95). Specifically, Briefel argues that the “spectral incognizance” subgenre of horror is “dedicated to reassuring viewers of their safety” (ibid). Additionally, death is presented as “an event that can be overlooked” (p. 96). “Those who overlook their deaths”—like Malcolm Crowe—”are not really dead” (p. 97). This means that the film has insulated us from the very real idea of death by presenting ghosts who do not act like they are dead because they do not know or accept that they are dead. Even though, ultimately, Malcolm accepts he is dead and presumable moves on, death here becomes a “cognitive act,” a choice. Like memory is our current version of some past event, death now is just our current, more comforting version, of a future event. It may be inevitable, it may be horrible, but for the moment we are comforted by the distance film provides. Oddly enough, this works in the same way that Anna seeks comfort in film, despite the distance. That comfort is incomplete because of the distance, because of the time passed since Malcolm’s death, but I am not suggesting that death goes away because a film tells us so any more than I am suggesting that watching an old video tape is exactly the same thing as remembering the event depicted. In fact, neither of those acts is perfect in its recall, and, ultimately, we are, in the present, a product of our experience of either one, constantly changing and shifting, as we move one step closer to, well, death.

And, in case it doesn’t seem like it, I meant that in a positive light. As Breifel argues it, “repeated viewings of The Sixth Sense… in which we compulsively search for clues of [Malcolm’s] death… confir[m] our stable position as spectators of death—but not its victims” (p. 99). Death is something that happens. We do not need to fear it, and movies like The Sixth Sense make that a little easier.

British Psychological Society. (2011, April 19). Memory ‘is not like a video tape.’ http://www.bps.org.uk/news/memory-not-video-tape