some stupid killer stalking some big-breasted girl who can't act

“And only I can get him.” - Nancy Thompson, A Nightmare on Elm Street

The opening sequence to Scream 2 includes a remake of the opening sequence to Scream under the guise of a film-within-the-film Stab. Heather Graham in the stead of Drew Barrymore is not just sitting around making popcorn, about to watch a movie. She’s still making popcorn but inexplicably, also just getting into the shower, because the film-within-the-film is a bit more stereotypical of the slasher film than Scream was or Scream 2 is.

Given how Sidney slept in more girly wear in the first film, it’s notable that she has grown up and at college she sleeps in boxers, just one detail in blurring gender lines, something that comes along with the slasher film. It’s not necessarily a coincidence, by the way, that her name is Sidney, the name alone sitting right on the brink of male/female. Clover (1987) and Keisner (2008), just to name a couple, make a point of the names of the Final Girls of horror: Stevie, Marti, Terry, Laurie, Stretch, Will, Ripley (yes, they count Alien as part of the tradition of the Final Girls), Joey, Max. Add to that Sidney. But, we needn’t be as shallow as that.

1 a : the arrangement of actors and scenery on a stage for a theatrical production
b : stage setting
2 a : the physical setting of an action (as of a narrative or a motion picture) : context
b : environment, milieu

Wee (2005) goes past this subtextual definition into some more specific elements; she writes:

a group of young, often teenage, characters as potential victims; imperiled, sexually attractive young women being stalked by a knife-wielding, virtually indestructible, psychotic serial killer; and scenes of unexpected [unless you’re a hardcore fan, of course] and shocking violence and brutality. (p. 44).

And, these conventions—plus the postcoital murder scene—were reified with each successive sequel, spinoff and low-budget imitator.

Let us focus in on those sexually attractive young women, the Final Girls. And, let us assume as Clover (1987) does, the killer is “propelled by psychosexual fury [and is often] more particularly a male in gender distress” (p. 194). Or he may simply be stunted in his development as a male if not specifically blurring a line into femaleness. The quintessential slasher killer is Norman Bates in Psycho, a man whose personality is partly taken over by his own dead mother. Jason Vorhees murders only after his mother is killed, and there seems to be a strangely close relationship going on there, given he sets up a shrine around her severed head. Freddy Krueger is a pedophilic child-killer, certainly not a properly developed male by societal standards. Billy Loomis in Scream is killing out of revenge over his mother abandoning him. And, he stalks numerous victims before he gets to the Final Girl.

That Final Girl—like Laurie Strode in Halloween (Clover’s (1987,1992) definitive Final Girl), she reflects what Christensen (2011, citing Welter) describes as the “four cardinal virtues of a ‘true woman’ ... purity, piety, submissiveness, and domesticity” (p. 29). Sidney Prescott tries for the first, skips right past the second, way past the third and we barely see enough to comment on the fourth, except it may be worth mentioning that the climax to Scream—with the revelation of the killers’ identities—takes place in the kitchen at Stu’s house. In generally sexist terms, the kitchen is one of the most domestic (read: feminine) parts of the house. And, Laurie Strode, remember, makes her money babysitting, i.e. playing at domesticity.

The Final Girl is “abject terror personified... she alone finds the strength either to stay the killer long enough to be rescued (ending A) or to kill him herself (ending B). She is inevitably female” (Clover, 1987, p. 201). She is

boyish, in a word. Just as the killer is not fully masculine, she is not fully feminine—not, in any case, feminine in the ways of her friends. Her smartness, gravity, competence in mechanical [picture Nancy in Elm Street setting up those Home Alone-style booby traps] and other practical matters, and sexual reluctance set her apart from the other girls and ally her, ironically, with the very boys she fears or rejects, not to speak of the killer himself. (p. 204)

Ultimately, in Clover’s terms—and, in discussing slasher films, everybody inevitably quotes Clover these days—you get a masculinity-challenged killer armed with phallic weapons, sexually active victims getting killed one by one, and a femininity-challenged heroine who has to find it within herself to not just run away from the killer (at least not since Texas Chainsaw Massacre, anyway) but to fight back, usually by taking up the phallic weapons herself... read a piece about this stuff shallowly, and it comes across a little simplistic, every weapon that can penetrate taken as phallic, the act of fighting back itself taken as masculine. Christensen (2011) actually makes a good case for Laurie Strode not being the definitive Final Girl because, like so many other Final Girls, she takes up weapons—knitting needle, carving knife, clothes hanger—to stab Michael Myers, saving herself only by taking on masculine characteristics. Christensen calls Laurie Strode “antifeminist” and suggests Nancy Thompson in A Nightmare on Elm Street as the more appropriate model for what a Final Girl should be. Nancy does not defeat Freddy Krueger by stabbing him. Hell, Freddy Krueger is not even, quite literally, an external villain. Recall Daughton (1996) and the distinction between the feminine and the masculine quest. The feminine quest is internal; Nancy’s fight is internal. She defeats Freddy by a) wrapping her arms around him (certainly an act more feminine than masculine) to bring him out of the dream, then b) turning her back on him to take away his power by no longer expressing fear and demonstrating as well that this is still a dream. 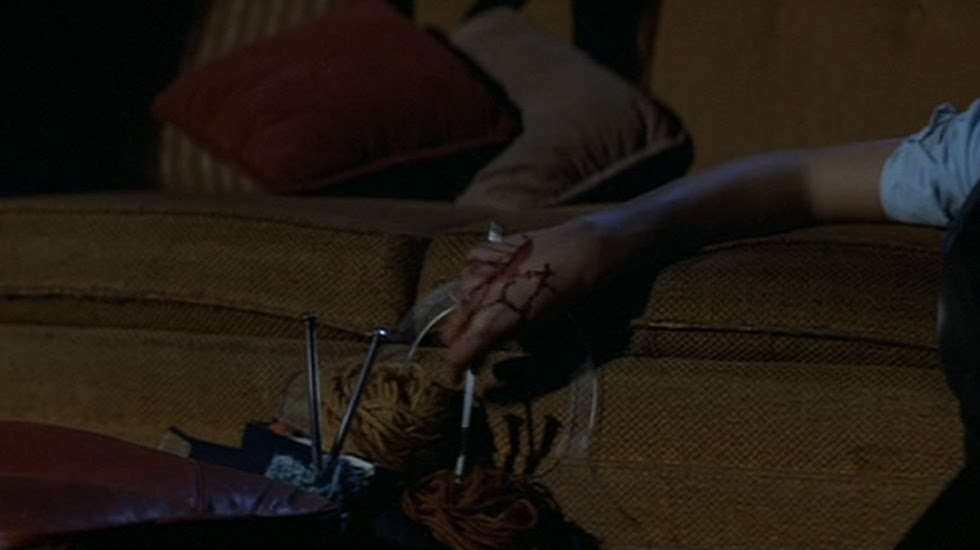 But, I want to come back to those weapons—Laurie Strode’s weapons. The supposedly phallic weapons she uses against Michael Myers are a knitting needle, a carving knife, and a clothes hanger. Clover suggests the Final Girl “meets the killer on his own terms” with the stabbing and the penetrating and the phallic symbols (p. 210). But, I don’t think it’s fair to take every penetrative object as definitively, automatically phallic. Even taking the male/female divide as a strict binary, Laurie’s weapons fit in the feminine side of the Venn diagram of life. The knitting needle is a feminine item, to be sure, representative of the creation of clothes, of blankets, womanly work by societal standards.

(For the record, by the way, I am not approving of any of these standards, merely using them because that is how details get into film, by being generally accepted.)

The carving knife, specifically, is a womanly item as well, coming from and belonging in the kitchen. Unlike, of course, the hunting knife wielded by any of the various killers in the Scream films. And the hanger—again linked to clothing, hardly masculine. We could take these weapons as masculine because of their phallic, penetrative nature, or we could look to who these items belong to, per societal standards.

Of course, in both Scream (watching it now) and Scream 2 (just watched it), the killers are offed with a gun, which is hardly feminine or domestic. Go figure.