I can relate a bit too well to the fictional Charlie Kaufman in Adaptation.. The awkwardness, the nervousness, always being stuck in my own head. 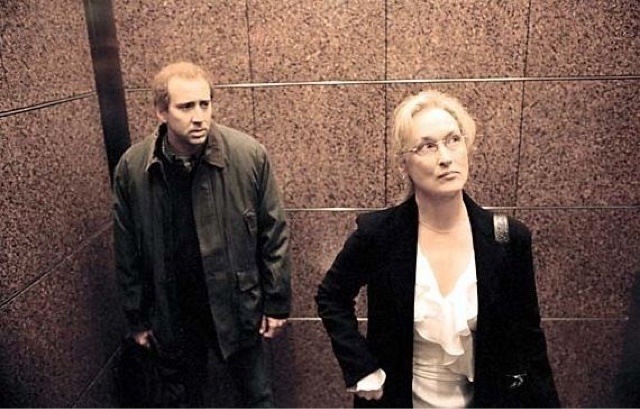 Laroche as well. His obsessions. His movings on.

And Susan Orlean. How she wishes she could end things as abruptly as Laroche is capable. How she wants to want something as much as "these people want flowers." This week two new episodes of The X-Files aired after more than a decade without. I used to have a copy of Mulder's I WANT TO BELIEVE poster on my wall... You can see it in this photo of my small, cluttered bedroom in circa June 2000. 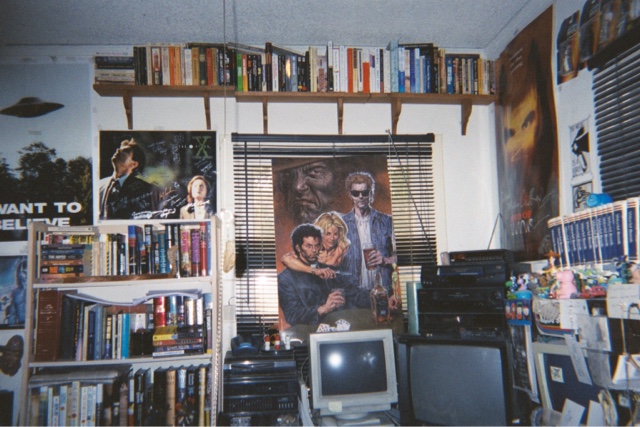 The other X-Files poster there was signed by a few actors (including Gillian Anderson) and several of the writers of the show at a couple X-Files-specific conventions. Thinking about this conventions just now I found it interesting how I could waiver between different versions of myself in just one day. Awkward and alone through most of the day then happen to be in line with, as you might expect, someone with similar interests and similar affectations, and we strike up a conversation. We have a good time. Then we go our separate ways. Life as it was returns.

You can also see the stack of VCRs on my TV that I used before, you know, TV shows were regularly released on VHS or DVD or Netflix. I must've had hundreds of tapes. Now there are only several dozen left, ones with shows that never came out on tape or disc, or that I have been unable to find online.

Charlie just fantasized about the Caroline reading his script and marveling at his genius. I know that fantasy... Well, not the sex part of it. But that notion that you finish the thing you're writing--the poem, the essay, the short story, the novel, the screenplay... the comic strip, even... hell, even a simple little sketch scribbled on some random 3x5 card--and you want someone to see it, someone to see its brilliance--that's a feeling I've had so many times that I cannot count them. In retrospect, even right after that notion I just described, I could tell that some things I had written just were not that good. My novel DemonAngel Catharsis, for example, was full of awesome ideas and deliberately had no structure to it to ground its supernatural elements in the mundane details of real life, but it was a little too sprawling. A little too big. And, I've never been good at editing. I don't really rewrite. That's a big part of why the blog format works for me, I think. A blog entry doesn't need to be perfect. It doesn't need to be polished. It doesn't need structure. It can be perfect. It can be polished. It can have structure. But, those are secondary to it simply being an echo of the time and place and circumstance of its creation. Most of these entries are written as a movie plays nearby. If a movie is brand new and I saw it in the theater, then I write about it later at home, but mostly the circumstance of this... thing is that I have a movie I've seen (probably more than once) playing nearby and I write as it goes, like some stream of consciousness catalogue of my thoughts as it plays. Other times, it is like a two-hour research paper. Less structure than a proper academic paper but serving the same end.

Charlie just told Donald that he wrote himself into his script because he can't talk to Susan Orlean. He's enamored with her but cannot bring himself to talk to her. (Ultimately, Donald will stand in for him to go ask her some questions.) And, I mentioned my novel DemonAngel Catharsis above and I thought of a moment in that book, or the writing of it anyway. See, the main character was very much autobiographical, if I happened to have an angel and a demon attached to me. And, he had the same problems I did, the same antisocial behaviour. But, the story had him close to pairing up with a girl. And, there was this moment in writing the story where I decided to give him. something I didn't have in my own life. (I mean, aside from the demon and the angel and his eventual telepathic and telekinetic abilities.) I let him get the girl, as it were. I gave him a chance at happiness I didn't have at the time. With the supernatural stuff, as well, he had more of an obvious purpose to his life now that I had or expected to have. I was a college dropout with an office job but he got to be more than that.

I'd bend realities in other stories of mine--my screenplay Fugue that I mentioned yesterday, the novels The Empress of Time and Lion Horse Tree and the unfinished Song of Fellfaraway. But I would never write myself into a story. Not explicitly, anyway. I was always there in the characters, bits and pieces of me in them, bits and pieces of them in me. Briefly, I toyed with a veiled autobiographical story about me and the girlfriend I lived with for a few months in Tennessee and Arkansas. The characters were what TV Tropes would call us with the serial numbers filed off. But the ex husband that kept coming between us became here a ghost of a sort actively inciting us to arguments and what probably would have been a very violent climax had I gotten past the first few pages. What stopped me, actually, was that it wasn't autobiographical enough; I was trying to give her some of my traits and the fictional version of me some of her traits and that was ruining my ability to tell the story. Plus, there was far too much exposition in the opening. I just didn't like it.Too much of nothing, and not enough action. It needed some help from Robert McKee or Donald Kaufman.

(Actually, I've never read McKee. I've got some Syd Field books on screenwriting, but I never got around to McKee's Story. I'm more of a mind with Charlie than Donald; I don't write to rules or even principles. I just write. Of course, in recent years, I don't much write.

I write a lot. A lot. I average well over a thousand words each day in this blog. Too long for a blog, by the way. Shorter entries mean more readers. It's a statistical fact. But, I a) don't care because I'm wordy or b) really like to self-sabotage or c) both.

I have a habit of writing things how they shouldn't be. <Fugue, for instance,, is about a girl who escaped into a fantasy world than escapes back into reality, but most of the action is conversation, dialogue. And, in the end, she breaks the frame of the film itself, and she refuses to participate any longer in a plot that causes her pain. It's a story that should be very action-oriented, but I ground it in a lot of talking. More like a stage play than a screenplay.

I wrote a stage play once that was very much structured like pieces of a novel, but a narrator telling the story of the action as she stands on stage rather than the audience seeing the action.

It's something more han me being eccentric or me having a habit of sabotaging myself.