all my favorite memories have been of movies

You don't know what's going on. We start with pointless voiceover--

In Hollywood, one of the fastest ways to the top is to work for someone who's already there. The system dictates that one must first be a slave before you can become a success. But this can be a very demanding process. Only a few people have the drive to endure the thousands of indignities and hardships that make up the system. Now, this drive is usually motivated by greed, sometimes ambition, sometimes even love. There are stories of love inspiring success over the most insurmountable of odds. This is not one of those stories.

--adds nothing to what's coming, doesn't reveal anything unique or particularly intriguing, and you don't know what's going on.

The conversation about Shelley Winters, on the other hand, is a fantastic introduction to what's coming. Guy (Frank Whaley) knows his films. It's clear that he is better than his position. Then, we meet his overbearing boss Buddy (Kevin Spacey) over the phone and the dynamic between them is clear. We don't need a voiceover. We don't need some narrator trying to explain some deeper meaning. We just need shit to get going.

The dead body might have been a useful hook, if not for the voiceover Or maybe a shot of Guy tied up from later... 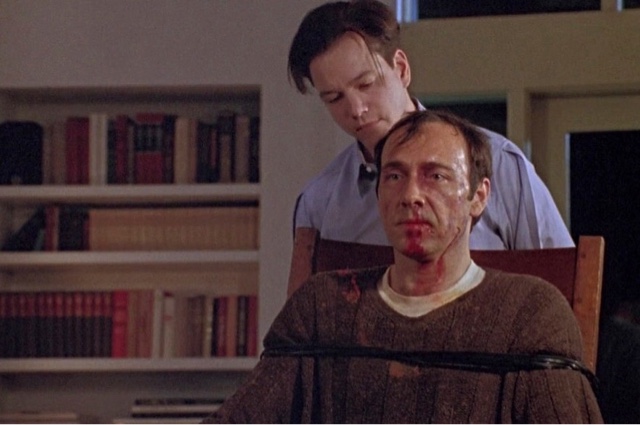 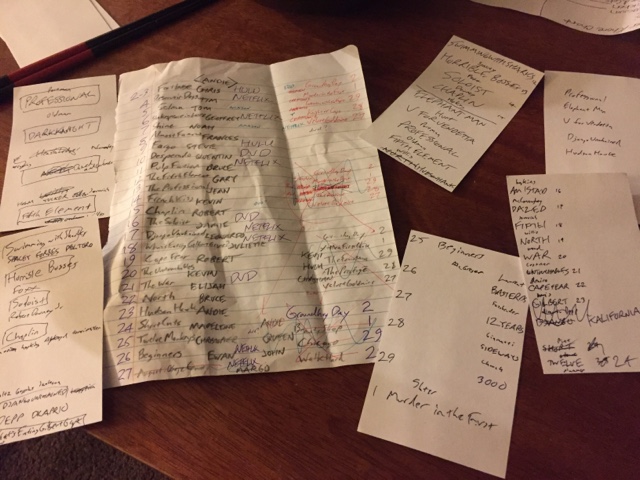 And you could zoom in and try to figure out what's going on in this blog this month, but it won't really matter until later anyway.

This movie does start at the end of the story. Guy is fed up with Buddy, finally, and he shows up at Buddy's place and points at Buddy his own gun. Ten minutes in, we're back at Guy's first day on the job. Buddy systematically picks him apart and tears him down. He's breaking him, training him.

Buddy: You thought. Do me a fucking favor. Shut up, listen, and learn. Look, I know that this is your first day and you don't really know how things work around here, so I will tell you. You have no brain. No judgement calls are necessary. What you think means nothing. You are here for me. You are here to protect my interests and to serve my needs. So, whilst it may look like a little thing to you, when I ask for a packet of Sweet-N-Low, that's what I want. And it's your responsibility to see that I get what I want.

And later Buddy will double down on this when Guy asks him not to yell at him in front of the entire office. Kevin Spacey only has a few notes that he hits on a regular basis but the ones he's hitting here he is hitting perfectly. Buddy Ackerman is a character worth studying. Especially after the speech just now, Guy leaves the office and Buddy sits down and he's not angry. He's amused.

I don't know the first movie I saw in a theatre. I know I saw Raiders of the Lost Ark in the theatre and I was only five when that came out. I know I saw Halloween in the theater, but that was a rerelease so I'm not sure how young I was. I remember the day we had to walk out of Born on the Fourth of July because my mother was offended by it (I'd see the whole thing later on cable). I remember the night my friend Alain and I were going to see Indecent Proposal but got kicked out of the theatre--it was rated R, so we had tickets to a different movie. We ended up seeing Born Yesterday that night instead. I remember going to see Stephen King's Sleepwalkers with some friends, walking over to Rosie's Diner afterward, eating a lot of fries, drinking milkshakes, and shooting toothpick umbrellas into the ceiling tiles. (That was a thing.) I remember manipulating my father into taking me to see Project X. I remember walking home after midnight from The Blair Witch Project and my sister acting afraid. I remember going to see Valentine and The Mummy Returns in the one theatre in Forrest City, Arkansas when I lived near there for a few months; the only movies I would see in the theatre for months before or after. I can remember sitting down to so many movies over so many years. I know at what theatre I saw almost every movie. Some of them blur together.

Whenever someone dismisses movies because they're just entertainment or some approximation thereof, it pisses me off.

And, I kinda want to tie them to a chair and torture them like Guy does Buddy here.