this guy walks into a bar...

No Oscar nominations for Desperado. Still, despite Roger Ebert's suggestion, in his review, that Robert Rodriguez had not yet "learned... How to structure a story so that we can care about the violence on more than a technical level," I think there are characters here worth caring about. Plus, the technical level here is so far above so much else that it hardly matters. The simple take--Ebert's: Rodriguez "has a gift for visuals that can make scenes dance on the screen." The more complicated version: After making El Mariachi for $7,000, using local actors and local, well, non-actors, practical effects and readily available locations--plus the camera thing, which I'll get to in a moment--Rodriguez knows how to plan his scenes, how to stage them, how to frame them. Unfortunately--I think--he got sidetracked later into kids films, but there are moments of genius in some of his stuff.

The camera thing, and I learned this in either the commentary track or behind-the-scenes footage (or both) on El Mariachi, was this: knowing he didn't have money to just shoot whatever he wanted to shoot--because this was not today when a film like Tangerine can be shot on iPhones and be seriously considered award-worthy--he had to plan out his scenes ahead and know exactly when one angle in, say, a two person conversation, would need closeups. While filming, he would pull focus when he knew he would be editing in the reverse angle, rather than film the same scene more times than he needed to. Thing is, yeah, this saved time and money, but it also ingrained in Rodriguez a sense of what shots he needed, what angles he could use, what camera movements would work, well before he got anywhere near the shoot. So, there is not a wasted shot in Desperado.

(For example, Steve Buscemi was only available for seven days, Cheech Marin for six. So, every one of their scenes had to be meticulously planned ahead.)

And then there's a big shootout and I lost track of typing. I swear I was making a point... Or had I already made it? Is this a nice short entry instead of my usual ramblings? 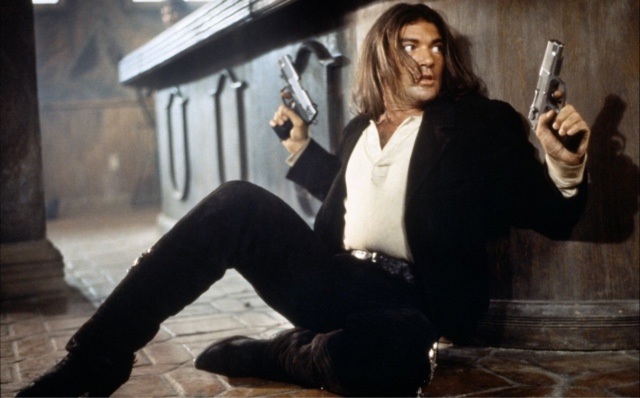 The tangent that might be interesting--especially because I have not dealt with box office numbers in a while in this blog--is that this movie played at the movie theater where I worked for six months in 1995. I saw the beginning and end of this film a lot. The weekend this movie came out, we (probably*) had Dangerous Minds, Lord of Illusions, Something to Talk About, The Net and... Hm, not sure if we still had Batman Forever or Casper or Clueless or The Usual Suspects. Probably the latter because it was the most recently released of the four. At the underground theater a block away, they (probably*) had A Walk in the Clouds, Mortal Kombat, Waterworld, Apollo 13, Babe and... a few others; that theater had 8 screens, I believe. We had 6.

(* I say probably because if I don't remember seeing parts of the movie over and over, I assume it was at the underground. But, I may have just avoided it. Something to Talk About, for example--the end was not that interesting to watch and rewatch, so I usually just got to that auditorium as the end credits finished and it was time to clean up. But, I remember that movie being in auditorium three quite specifically. Don't know why. Action sequences like the one at the end of Desperado or Batman Forever--I'd get to the auditorium early, watch the end and wait out the credits or start sweeping in the dark if the audience had already cleared out. Those films I listed above as being at the underground--I know that I only saw each of those once on the big screen, so I know they were not at our theater. I still saw them, of course. If I wasn't willing to pay for the ticket, I could arrange through my manager to the other theater's manager to get in free over there. Saw a lot of movies that summer. Between our two theaters, we got all the wide release movies. I would quit that job about the time that more interesting movies--what I would a few years later and every year since call Oscar movies--would be hitting other, more interesting theaters. As I mentioned the other day, I would only really start obsessing about seeing all the Oscar movies in theaters later. At that point, I was seeing those movies mostly by chance because, you know, I'd already seen everything else.)