where is everybody going?

If any new readers are still here--while this is officially the entry for 2 February, it will get posted close to midnight on the west coast, so it will already be tomorrow for most anyone reading this right away. And later than tomorrow for anyone reading it... later than tomorrow. But, anyway, Groundhog Day is on again, but I want to get a quick recap going first. The last recap entry was Day 884 - every day was exactly the same. (If you're new, that link should get you to an entry that will link you back and link you back and link you back all the way to the initial entries of phase one of this blog--365 days in a row of Groundhog Day.)

This, by the way, is an image I found recently online, a nice behind-the-scenes shot of Bill Murray signing autographs.

(Unfortunately, that group of kids was not the group of schoolkids that saw Murray beat the fake groundhog against a fence post, or I might have had to figure out contact information for the photographer and see if they knew the location. The location in this photo is actually quite obvious--Madison is the street in Woodstock that deadends into the "Cherry Street Inn"--i.e. the street covered in snow at the end of the movie. The fence post thing--that happened while they were out filming the car chase, and I have yet to find the location for the chase once they are on the open road. The quarry, and the road going into it--I've got that, but the hilly forget road not so much. One of the last mysteries left at the Groundhog Day Project. (There is also the matter of the nurse's name--even on my blu-ray copy, the character's name tag is not readable.)) 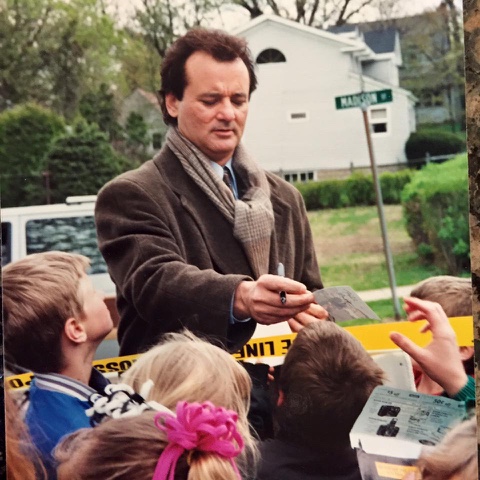 Anyway, the recap. This past month was a mix of Charlie Kaufman movies and Oscar-nominated films, and there was a nice 8-day block dealing with the Best Picture nominees (sort of) and the #OscarsSoWhite controversy... I digress.

I actually saw Anomalisa the first time on Day 883, which was the end of the previous Groundhog Day Project month. But, then I started this month by watching the film three mores times: 885 886 887

After livetweeting a viewing of Jurassic World a few days earlier, I livetweeted watching Galaxy Quest after Alan Rickman died and then put together a short blog entry for Day 896.

Then, was the Best Picture series, most of which barely talk about the film in question:

Finally, I got to Groundhog Day early yesterday, Day 914.

And I still have not decided what I'm watching tomorrow or what theme I might go with this month.