Interesting thing. I'm watching Chaplin the other night and I'm too sick to really get into some preachy, self-help-style rant about being creative, being yourself, and all that jazz. Tonight, I'm watching Dazed and Confused and it occurs to me I could pull the same sort of message out of this film. I mean, that is the point to, say, Pink's (Jason London) throughline, yeah? That's what the freshmen are doing heading out to party with the older kids. That's even what Wooderson (Matthew McConaughey) is doing hanging out with everyone younger than he is. They're all trying to just hold onto some ideal form of self, to enjoy a life full of possibilities and...

See, it could turn cheesy, easy.

And then I get distracted, because cheesy rhymes with easy and I thought maybe I should replace it with corny and then I got to wondering what was the difference between cheesy and corny. And, I'm feeling like Slater (Rory Cochrane) and I'm just on a little bit of DayQuil. 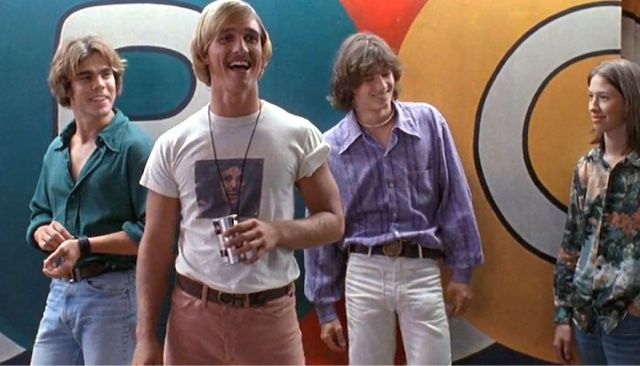 A nice sprawling film like this, lots of characters, lots of tangents--when done well--is an amazing thing.

To be fair, I am still sick, but that isn't why I'm saying so little. Every scene here amuses me in some way, and I'm just not sure I can say anything that the film doesn't say better. So, just watch the damn movie if you haven't seen it already. And watch it again if you have.

...if we're all gonna die anyway, shouldn't we be enjoying ourselves now? You know, I'd like to quit thinking of the present, like right now, as some minor, insignificant preamble to something else.

Or is it Dawson (Sasha Jensen) who gets it?

It's not even that the film really makes an effort to let us know who every character is. But, whether it's Linklater's direction or the actors' and extras' performances, you get a sense that each of these people is someone. Like no one's acting. They just are.

I think what's interesting about Dazed and Confused is that while it includes a whole lot of drunk and high people, it doesn't seem designed for a bunch of drunk or high people. Movies that fit the latter category--I don't much like them. I prefer a film to give me the experience, not make me work (or smoke) for it.

The one bad thing, I suppose, is this: O'Bannion (Ben Affleck) probably thought he was being his ideal self, too. The asshole. Probably gonna end up running for president forty years later.