but then i don't have a story

I can forgive the voiceover initially in The Soloist because the real-life Steve Lopez not only writes a column for the Los Angeles Times but also has done several narrative stories on TV as well, which involved him reading a lot of what would be a column out loud. Now, if it doesn't continue throughout the film, The Soloist and I may have some words like Horrible Bosses and I did yesterday.

(I wish my head were clearer tonight. Came home rather sick after seeing a couple Oscar-nominated Foreign Language Films--Theeb and A War. Watched the BAFTAs a little feverish, going to have to double checked what movies won things tomorrow.)

I have seen The Soloist. Once. In 2009. I remember dismissing it a bit the way I would dismiss The Blind Side later in the year. White savior for a black man in trouble. (To be fair, technically, Steve Lopez is not white, but Robert Downey, Jr. certainly is.) Having read the book recently and having spent a few hours with Steve Lopez every Monday lately--he's teaching a class at CalState Los Angeles, and though I didn't need anything more than thesis units this quarter, this class sounded like something right up my alley. And, it has been fun so far. Tomorrow, we're supposed to have the producer of this film as a guest speaker. And I think Catherine Keener is playing a fictionalized version of an editor (amalgamated with a nonexistent ex-wife) who came to our class a couple weeks ago. 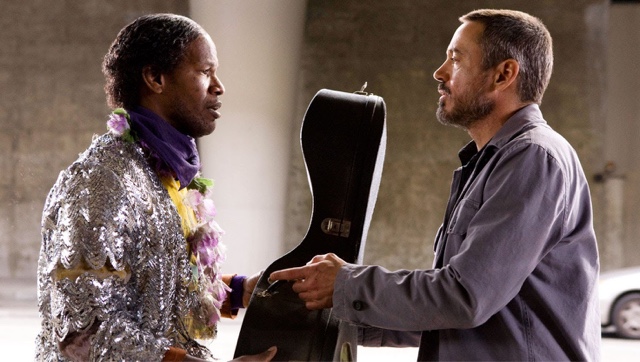 I like newspaper movies. Spotlight being the latest big one. The Paper being one of my favorites. This isn't really going to be one of those.

Nor does it seem like the voiceover is going to continue. Damn movie!

There's a little bit of voiceover as Lopez (Robert Downey, Jr.). searches for Nathaniel (Jamie Foxx), so maybe it will be okay.

There's some nuance missing from the backstory with Nathaniel playing cello instead of bass. When he was young Nathaniel's father left (or got "put out" his wife, anyway). At one point, Lopez describes (in the book), why Nathaniel picked the bass:

It was a skinny young man who liked the idea of an instrument so tall you had to stand up and wrap your arms around it, an instrument that spoke in a deep and powerful voice you could feel coming up through the floorboards. Nathaniel Anthony Ayers, all of thirteen years old, was mesmerized by this instrument the size of a good strong man. (p. 155)

I'm the one he calls now, the one who, when it comes to music, is student rather than teacher. He calls me at work, calls me at home, calls me on my cell phone. Sometimes it's something specific he's after. He needs rosin or a new strin, or he wonders if I can find a particular piece of sheet music for him. Other times, it seems as though he calls just to know that I'm there. "Hello, Mr. Lopez," he always begins, asking about every member of my family. (p. 175)

They're only two years different in age, same as Foxx and Downey. But there does seem to be an almost automatic patriarchal role in Lopez' urge to help Ayers. But, do we fault such an urge over race? Or should we all, regardless of our own race, set out to help anyone in need, regardless of theirs? In fact, the book does a better job, as you might expect, of painting a friendship between Lopez and Ayers. Lopez told NPR,

his friendship with Ayers has "always been a two-way street, it's not just me doing for him."The writer explains that the musician re-ignited his passion for journalism adn gave him a sense of well-being: "You know, there's this humility, there's this good feeling I have from giving something," Lopez says.

(Movie Lopez is kind of a jerk, getting (more) mad at Ayers when he doesn't want to leave his cart behind.)

What Ayers gives Lopez might be summed up in what Lopez tells Mary (Catherine Keener):

I'm telling you, it was such an unbelievable experience, the whole thing, the whole day. And if you had seen him, if you could have felt him... I mean, it's the same hall. We're listening to the same goddamn music, but... But, no. You see him, it's one thing, but you feel him... I'm watching him. He's watching the music. And, while they're playing, I say, "My God, there is something higher out there. Something higher out there, and he lives in it, and he's with it." I've never experienced it, but I can tell... I don't even know what you fucking call it.

Mary tells him that is "grace."

The film is trying for something profound, but I'm not sure the camera flying with the birds or the flashes of colour quite get there. Nor does the raccoon stuff work as a particularly good metaphor.The flashbacks with Nathaniel are a bit melodramatic...