i'm trying real hard to be the shepherd

Sunday morning, October 16, 1994, the underground theater in Old Town Pasadena. Officially, it's called the AMC One Colorado. Throughout the 1990s I would go there a lot. This time, I'm there for Pulp Fiction. I had only recently started my subscription to Entertainment Weekly so I'm fairly sure I knew about this film this weekend because I read the review in the Los Angeles Times that Friday morning, sitting in a classroom in Waite Phillips Hall. Discussion section of an anthropology class. I had the Times delivered daily back then, even made an effort to read it, especially the Calendar section. And, I made my way to Old Town for movies as often as I could. I wouldn't work at the United Artists Marketplace a block from the underground theater until '95. 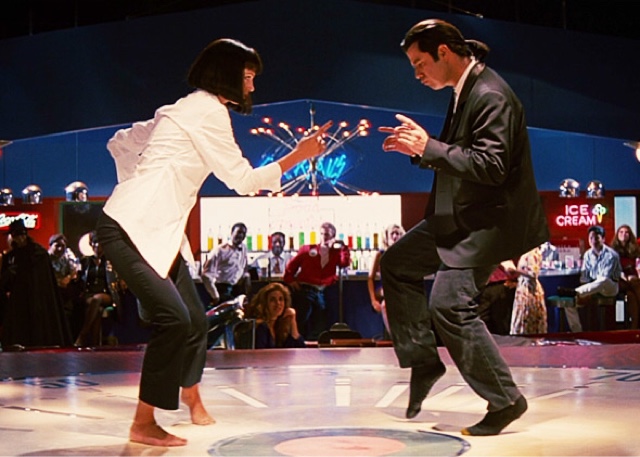 Thursday night, February 11, 2016, my living room floor. Groundhog didn't see his shadow last week so winter's over and it's been hot this week. Got a fan to my right, my son Kieran sitting in the chair to the left--he loves Tarantino films. On the other hand, the more I watch of them lately, the more I'm noticed how few tricks he's really got. Like this bit with Jules (Samuel L. Jackson) and Vincent (John Travolta) at Brett's (Frank Whaley) place (I think it's his place; he's the one Jules is talking to)--structurally, there's a bit of The Hateful Eight (the entire Mimi's Haberdashery section of the film) here. A bit of the opening to Inglourious Basterds. Reminds me of--

Sunday night, September 29, 2002, our apartment on Maple Street here in Glendale--small place, one bedroom only. Oldest two kids were in there. (My then wife and I slept on a futon in the living room. We'd upgrade to a sofa bed later, and upgrade to a larger apartment on the other side of town even later.) Third child wouldn't be born until December. A TV show called Boomtown premieres. It's basic premise is that the stories will come in pieces, not necessarily out of order, but... Well, for example, in that pilot episode--and Jules was just explaining what a pilot was to Vincent not too long ago--a pair of cops are chasing a perp and they get separated... Maybe they were chasing two perps. I don't remember exactly; for reasons I will explain in a moment, I never really revisited that show like I would many others. Anyway, the show follows one of them first then goes to commercial break or something, comes back to the moment where they separated and we follow the other guy. Both parts mattered but instead of doing some crosscut editing and risk confusing the viewer they let each chase play out on its own, let them breathe. It's like the opposite of how action films were getting editing by (and since) then. But, even better, at the end of the episode we flash back to the perp, a bit about how he got into the situation, and we even flashback to when the perp was a kid or something... I actually wish I remembered the specifics as much as I remember loving the episode. Or as much as I absolutely hated the show by the third or fourth episode because the gimmick turned cheap right away. Like the reveal of who the bad guys are in The Hateful Eight; nevermind my problem with the sudden voiceover, that flashback doesn't really add much to the proceedings. Or the dude coming out of hiding at Brett's place in this movie later. It's as useful as using a cat for a jump scare in a horror film; a brief surprise then back to normal. Another episode or two into Boomtown and there's the same sort of gimmicky reveal of a guy hiding out in the attic of a house. Just having him show up suddenly would have worked fine, but no, we get a flashback because, hey, that's the thing that's supposed to set this show apart from other cop shows. I stopped watching soon thereafter when I realized the show was never going to use the broken structure for real character moments like the end of that pilot episode.

Friday morning, May 6, 2016 (the future... Ooh, spooky). I just saw Captain America: Civil War. And, while it was awesome, pretty much what I was expecting, I really wish they had divided this thing in two parts a la Kill Bill. I imagined a part one built around Captain America, part two built around Iron Man. How cool would that be? Some of the same scenes but from different perspectives, and the plots diverge here and there to show us stuff in one that the characters in the other would not be privy to. (I really should get to The Disappearance of Eleanor Rigby next month in this blog to explore how small changes in a film can change the whole.) The big climax could be difficult that way because one film would have to, in the internal timeline, end before the other...

Some Tuesday in fall of 1993. I don't remember which. The Eileen Norris Cinema Theatre on the USC campus. I had a gap between classes every Tuesday afternoon that semester. I would wander into the theatre most of those Tuesdays, see what movie was showing. In the evening, I would have Intro to Cinema in that theater, a lecture and a film every week. I don't know what the afternoon class was but it had something to do with crime dramas, mobsters maybe. I saw Goodfellas that semester. I saw Reservoir Dogs. Missed the first few minutes but got the gist of what was going on pretty easily. Loved the feel of it, the boldness. In retrospect, 22 1/2 years later now, I think the actors trusted their director a little too much and a lot of them read their dialogue about the same as each other rather than really make it their own. This film has that problem some, too. Especially when characters swear. I don't (now) fault Tarantino for this, necessarily. When I was writing fiction every day in my twenties, when I was writing screenplays or novels or short stories, trying to make different characters really sound like different people was one of the hardest parts. If I ever get the time to go back and edit my novel Clubhouse Blues--which I have mentioned in this blog before is probably the best of the bunch--a big part of a new edit would be going back, again, over the dueling narratives separately to make sure Maureen and Jimmy sound like two very different people. Jimmy's the naive adolescent who dreams of being in the military. Maureen's the smarter one, too old for her age and looking for something meaningful well before she's supposed to decide what she's going to do with her life. Anyway, a few of the actors do make the dialogue their own. Bruce Willis, right now, for example. He's got a particular cadence to his talk that makes him sound like a very different character than Jules or Vincent or Marcellus (Ving Rhames).

Some day about seven years ago. That upgrade apartment, a few blocks from this bigger one that the kids (and the cats) and I are in now. I try my hand at a book with chapters out of order. The basic premise--before I changed it not long before I started the actual writing--was that a doctor in Bethlem Hospital in 1880s London has gathered together a bunch of presumed insane patients who all fantasize about the same world, and he is piecing together a larger narrative from their stories in order to find an object called the driftstone. The initial concept was that each chapter would actually come from a different perspective, but figuring out all those characters and making them distinct was going to be too difficult. So it changed a bit. Instead, the chapters were going to be from the same perspective but "recorded" out of order, so the narrator one chapter would have a better idea of what is going on and what his doctor's agenda is than in a later chapter. The opening chapters were some good writing, but unfortunately I got busy with school and only got those opening chapters written.

Thursday night, February 11, 2016. Living room floor. Wondering what our fascination is with stories told out of order. I mean, you can call it postmodern or whatever, but that doesn't explain why we like it. Is it like how we might like a mystery--being able to put together the pieces as we go? Does it make us feel clever? Or do we like the idea of a narrative, or a writer, being more clever than we are? Do we like to make connections between storylines that don't necessarily tie together? I mean, Pulp Fiction violates several rules--insert Donald Kaufman calling them principles rather than rules--of screenwriting. There's no obvious plot from beginning to end, no clear middle. Instead, we get a few main stories interrelated and alternating instead of being intercut. Short Cuts--which is on the blog schedule for a couple weeks from now--does something similar. It's not as cool though. Doesn't have the Tarantino factor, I guess.

And, regardless of his repeated tics or his obvious foot fetish and insistence on steeping his dialogue in profanity, Tarantino does know how to make an entertaining film. Allow me to indulge in a little Roger Ebert. From his review:

Tarantino is too gifted a filmmaker to make a boring movie, but he could possibly make a bad one: Like Edward D. Wood, Jr., proclaimed the Worst Director of All Time, he's in love with every shot--intoxicated with the very act of making a movie. It's that very lack of caution and introspection that makes "Pulp Fiction" crackle like an ozone generator: Here's a director who's been let loose inside the toy store, and wants to play all night.

That Tuesday in 1993. The Norris Theatre. I'm still dreaming of being a film major, dreaming of making movies. Maybe something with the energy of this Tarantino fella. Maybe I won't ever make a movie. But, movies will always matter to me.