I want to love North just to be a contrarian. (I did see it when it was new (on video, not in the theater) but I don't remember it.) This is the movie about which Roger Ebert quite famously wrote:

Oh, and this, regarding the sequences with North's potential new parents:

They are all seen as broad, desperate comic caricatures. They are not funny. They are not touching. There is no truth in them. They don't even work as parodies. There is an idiocy here that seems almost intentional, as if the filmmakers plotted to leave anything of interest or entertainment value out of these episodes.

Personally, so far, twelve minutes in, North (Elijah Wood) having just talked for the first time to Bruce Willis (this first time as the Easter Bunny), I have found one thing amusing. Willis' line upon hearing North's name. "See your name on maps. Very impressive." That's funny.

But now, the school newspaper kid, Winchell (Matthew McCurley), who takes his journalism too seriously is... not funny. It almost should be. It's a nice idea, but.... 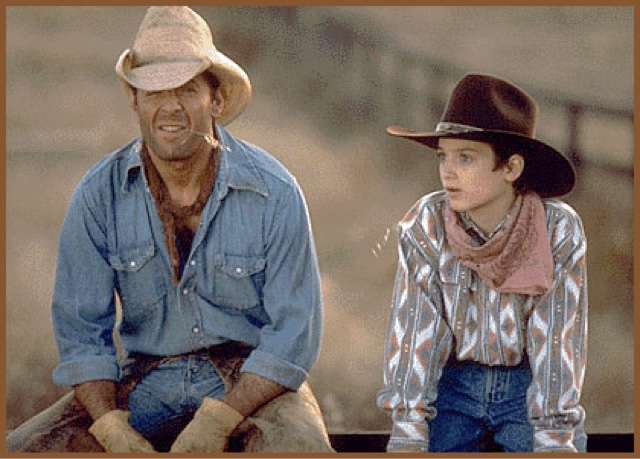 Maybe kids would like... some of this. Little kids might like North's parent's frozen and falling over at the news that North is suing to be rid of them.

Texas wants things big. Hawaii is barely a state. The jokes are quite sophisticated, here.

Thing is, I think the brief bit in Top Secret! with the fancy house with the garage on the tropical island is a better satire of the American ideal of domesticity than the white picket fences and lawnmowers outside the igloos here or, well, anything here.

They seriously did Eskimo-face makeup to darken Kathy Bates' face?

"No wonder we stopped for lunch 49 times" should be funny. But the line reading by Wood, the framing, the timing... something is wrong about it.

Did they have copies of his parents for no reason whatsoever?

I think the real problem with this movie is not that it is, strictly speaking, bad. It is. But that's not the problem. It's not trying to be some great film for the ages. It's trying to be a nice family film that, I guess, would brings kids and parents closer together. The problem is this coming from Rob Reiner, it's starring so many actors who have been so much better in so many other things, and it's just to... pointless. The film has no energy. I prefer my bad movies to be entertaining--something like The Room (609 610 611). So bad it's good. This is just so boring. It doesn't have the energy to be a fairy tale. It's got jokes about balls sticking to legs, and North calls Winchell an asshole. So, it's not a kids film. But it's got kid-level humor throughout, so it's not a film for adults.

And, ultimately, North's parents haven't changed, the it-was-a-dream twist is a copout (and doesn't make the offensive caricatures forgivable), and North should not take rides from random strangers he saw dressed as the Easter Bunny.

I don't hate this movie. I just don't care. It was a waste of an hour and a half... Except I'm glad I watched it again. Good to have the mediocrity of it fresh in my mind.