even if we never answer the phone

Instead, we get to Beginners from August: Osage County, the opposite direction of the original plan for this month. Things go backward sometimes. Plans fall apart. Marriages end. College plans get changed. A particular movie isn't available so a month has to be reconfigured so it will all still elicit the same poetry it was supposed to from the start.

Poetry may be overselling it, but we'll get to that.

(In the meantime, an aside: tomorrow is the Oscars, yesterday I saw the last of the nominees--Foreign Language Film nominee Embrace of the Serpent. This is only the second time I have managed every nominee. I've got a party of a sort tomorrow, but I don't even know how many people are coming. A speech tournament and a conference and a whole lot of sickness will be keeping people away. But, no big deal. Whoever comes comes, and we'll eat, drink, and be merry and I'm sure I'll tweet a whole lot (under my personal account, not the Groundhog Day Project one). It will be a good day.)

And, Beginners starts us off with some voiceover--well, first Oliver (Ewan McGregor) is talking to a the dog, Arthur (Cosmo), then there's some voiceover. (I like to imagine that the voiceover is just more of what Oliver is telling the dog.)

(I need to invent a name for that bullshit introductory (and sometimes conclusionary) voiceover. It is far too common a thing in movies, and I really don't like it.)

I like this voiceover. Maybe because I can imagine Oliver is talking to the dog. Maybe because it offers context and perspective. It offers an ending to come. It offers real characterization instead of simple information we could better receive another way.

And the dog talks back with subtitles. But, I'm fairly sure Oliver's not supposed to understand it (though in a couple instances later he clearly does understand). That actually makes it more interesting to me.

Sometimes, not being able to understand someone adds a level of... excitement, I suppose. Certainly mystery. Like the introduction of Anna (Melanie Laurent) here. At a costume party, in costume, and so is Oliver.

(As far as the poetry goes, Melanie Laurent was supposed to tie this movie to Inglourious Basterds in one incarnation of this month. We will instead follow Christopher Plummer out, the opposite of what was supposed to happen originally.)

Anna is also introduced without a voice--she has laryngitis. (Or her costume does. I'm not 100% sure on that one even though I saw this movie in the theater when it was new... Apparently, it is not the costume.)

The age difference between them--he's 38, she's 32 (closer in age than in reality; Laurent is 11 years younger than McGregor)--plays interestingly in their initial interactions because, in his Freud costume, he's playing older, with grey hair and a beard. Later Oliver will lament falling for a girl again when he thinks he may have forgotten how it works.

Oliver processes things visually--he's an artist--so it actually works in his, and her, favor that Anna cannot speak when they meet. She had to write notes and act out answers to questions. He also draws morbid drawings as his father, Hal (Plummer) is dying. When the doctor says Hal has a cancerous tumor in his lung the size of a quarter, Oliver (and by extension, us) imagines that quarter breaking down into change, two dimes and a nickel, five nickels, twenty-five pennies. It's a simple visual but a profound moment, the son trying to understand, and accept, his father's approaching death.

I love Oliver's tagging--for "historical consciousness, something bigger than myself" he paints:

It's absurd. It's brilliant. It amuses the crap out of me.

Then, Anna returns--she had to go out of town--and it's like she is a completely new character. She talks. She's no longer dressed in a male costume. She bites.

Oliver's mother's (Mary Page Keller) notions about black people and Jews amuse me. And, leaving that line without context for those who haven't seen the film amuses me even more.

I never finished that sentence. How this movie plays with the way we communicate fascinates me. Like the title--Hal is learning to live again after his wife dies and he admits to his son that he is gay, Oliver is learning to love again with Anna, and when Hal is dying, it's like two different attempts at life intersecting in the wrong direction.

Oliver's "The History of Sadness" comic is almost immediately depressing. 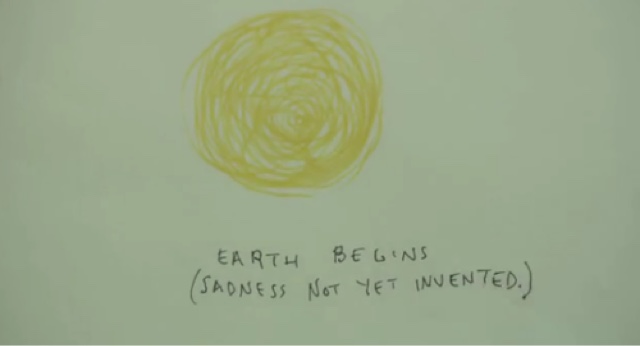 Forty-eight minutes in, the voiceover returns. Images accompany it just like in the beginning. This is how Oliver processes information. This is how we process information because this is what the film offers. Afterward, we see some of those same images again, as part of the album cover Oliver is working on. It's called THE SADS.

(In another month but this one, I just realized, I would put this movie on again tomorrow and maybe the next day and the next. There's room for so many angles here. This month, though, I will move on tomorrow. So, let me just say, while I only remembered the basic beats of this story from seeing it in 2010, I'd forgotten how beautiful some of its beats can be. This is my kind of movie, if such a thing can be said to exist.)

Back to communication, there's Oliver playing Anna and Anna playing her father as they pretend to talk on the phone. Anna does not tell Oliver about her father. Instead, the telling is one step removed. The interesting thing is, I think the movie is suggesting that even the indirect communication is direct. Communication is communication.

(And, I was just talking to my cat when he crawled onto the couch beside me. Go figure.)

Anna talks to the dog as well, or at least claims the dog talks to her.

Oliver asks Anna to live with him and the voiceover returns... This is what it looks like when she cries and it gets to me. And the film turns to The Velveteen Rabbit and I'm back with Eternal Sunshine of the Spotless Mind, I'm back with that rabbit, I'm back with myself in the past, trying to be real. It feels right now as if sometimes the moments, wherever they fall in the timeline, exist in such a way that they are always right now. Certain moments, happy ones, sad ones, the ones that wrench at your heart in some direction or another--they are always in the present. I am always in a park in San Francisco. I am always on the corner by the Burger King across the street from USC. I am always in the hospital room where my daughter first drew breath. I am always standing beside my car after watching A Separation with nowhere to go. I am always happy. I am always sad. I am always trapped in my thoughts, taking me this way and that way, and I am always free from such complications because this moment, right here, right now, wherever and whenever that is, is perfect and finite and complete.

Oliver asks Anna, "Are you happy, here?" She replies after a painful pause, "Well, maybe I'm not perfect at it. I don't really know what I'm doing. But I want to be here." And it's the best response and the worst response rolled up into one. And, it's remarkably, painfully, real. Oliver proclaims, "I don't think this is what I'm supposed to feel like." Anna leaves. And, I'm reminded of a thought and a feeling from when my wife and I first separated--the hurt of being together versus the hurt of being apart... As the doctor tells Hal just a moment later in the film, "Any more treatments will just... cause more pain." That makes perfect sense.

That is all for now.

Tomorrow probably won't be so introspective.