off to see the groundhog

First of all, hello new readers. It's that time of year when people are googling "Groundhog Day." And, well, if you're reading this, that might be you. (If you want to understand the holiday, go to this entry for the basics or this entry for a bit of melatonin science. Otherwise, stick around.

Second of all, I'm watching Groundhog Day early. The usual thing for year three is that Groundhog Day falls on the 2nd of every month--and I will watch it tomorrow to be proper--but alas I had a problem. At school from 7am to 10pm, had not really thought about what movie I was watching today until I was on the ride home. I thought about watching The Paper, a little bit of Michael Keaton working at a newspaper as an echo of Spotlight, plus it would tie into the one class I am taking this quarter--

(I believe it is officially called "Constructing LA" and something about narrative. Taught by Los Angeles Times columnist Steve Lopez. Involves a lot of narrative writing, non fiction narrative reading, and a lot of talking. Tonight there was a grade school sort of moment when Lopez asked me to read my paper from last week aloud because, of course, it was awesome. No room for humility at the Groundhog Day Project... Unless I'm writing about humility or a film that involves humility. But, are there really any of those? Gandhi maybe. Or Schindler's List.)

And, I must interrupt the parenthetical that was interrupting my regular text because--and you should really imagine a drum roll here--I just noticed something new in Groundhog Day. I've seen the film somewhere over 400 times by now--365 of those in 365 days, ending a year and a half ago. (If you want to know about Groundhog Day in all the horrible detail that writing literally hundreds of thousands of words about it will get you, you might start with Day 363 as that was the final recap entry, and that can link you back through all of them. If you want to stick with the present phase of this blog, you should know that I will be watching Groundhog Day again tomorrow, because that's just a standard for phase three, then I will be moving on to something else the next day and if it needs more time with me, or me with it, I will watch it again the next day, and maybe the next. Sometimes a movie only lasts a day, sometimes it lasts a week. I haven't totally settled on a theme for this month, though. I've got some ideas and may go for a sort of dual theme like this past month--Charlie Kaufman movies for multiple days plus Oscar movies mixed in--or December--politically themed films that tended to get me angry alternating (sort of) with pseudo-Christmas films.

For the record, once again, I do not review films. I wouldn't mind being a film critic, but in this blog that's just not what I do most of the time. Something like my entry on The Danish Girl or Straight Outta Compton might read a bit like a review would if I wrote one, but more often entries are what I call "responses" to film. Things that movies make me think about, elaborations on theme, research into backgrounds, or amazing and inspirational essays only tangentially linked to that day's movie. (Again, no room for humility here at the Groundhog Day Project.) I might spend an entire entry on a single scene in a film, or use a particular film as a jumping off point for whatever madness comes to me. And, (at least) once a month, I return to Punxsutawney, PA, Woodstock, IL, Groundhog Day. 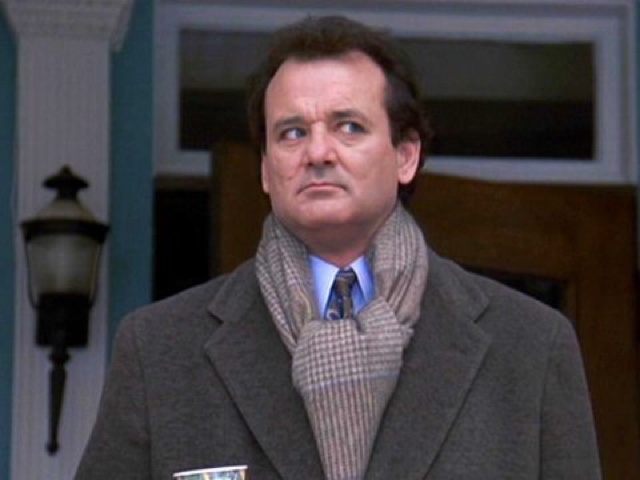 Oh, that new thing, by the way? First, a little background. One of the oft cursed IMDb goofs for this film--

(Oft cursed because while I tried two different times to manually edit and correct every single goof on Groundhog Day's goofs page, I'm not sure that my edits have still ever gone in. Similarly, while I actually have an outside source talking about me--last year's "The Accidental Swami" by Michael Schulman (which deals in my (and Danny Rubin's) trip to Woodstock, IL two years ago for Groundhog Day, and which I will be writing about in this narrative class this quarter)--I believe my attempts to add a reference to this blog to the Groundhog Day Wikipedia page have been rejected... four times now? Maybe they can smell the arrogance of putting myself into that page, or daring to correct the work of so many commoners on IMDb just because, you know, I'm the expert. Maybe I should learn a. Little humility. Maybe I need to keep doing this blog and doing this blog and doing this blog, like a community service, or a personal improvement project a la Phil Connors.)

--is that Phil exits the main hallway in the Cherry Street Inn without his gloves and emerges with them on. I pointed out once upon a time how there are two doors with a space between them at the front entrance to the Inn and this means there is easily a skipped cinematic moment in which Phil can put on his gloves. In fact, we can see those two doors quite clearly as Phil exits the Inn on, say, the first resumption of the time loop. The new thing I noticed today--and noticing new things became a time for celebration fairly early on in phase one of this blog (when I was watching this film every day)--was that the shot from inside, Day One, no time loop yet (per se), Phil tells Mrs. Lancaster that there's a 100% chance of him checking out today and he heads out and you can actually see from his shadow through the curtained window in the door that he turns and hesitates. Now, practically speaking, maybe there was no secondary door on the internal set, or maybe Bill Murray just didn't feel like marching on through it on that take because he was basically out of the range of the camera anyway. But, phase one of this blog, and my understanding of and musings on Groundhog Day, was always more about what is on screen than what is off. Oh, there were moments when I got seriously sidetracked by behind-the-scenes stuff, but there was enough material within the film--cinematic, philosophical, or what have you--to fill many a day of blog entries. Seriously, today is Day 914 of this blog and somewhere around 390 of those entries have been devoted at least indirectly to this film. I expanded my focus outward even before that first year was over, and I've gone in many directions since, including a month of slasher films and a month of westerns, but I keep circling back to Groundhog Day. Like Phil Connors, I am trapped in Punxsutawney, but for me it is a choice and it is not every day.

In fact, today in my public speaking class, I used clips of each of Phil's weather reports to demonstrate how delivery can alter the meaning and receipt of what someone is saying. Most of my students had not even seen the movie--a travesty that, alas, I do not have class time enough to mend--but just from those reports they could gauge quite readily who Phil Connors was before he went to Punxsutawney, how much he didn't want to be there once he was there, how dramatically different his report was from Buster's reading of the official prognostication, how far down into anger and depression Phil goes and how impressively he emerges. One of the great things about this movie is how readily character emerges through words and action rather than--sorry Danny Rubin--voiceover.

And, I realize, I never got back to that sentence that got cut off way up there at the end of paragraph 2. See, I was thinking about The Paper or Joe Versus the Volcano (because it came up while discussing Being John Malkovich) for tonight but by the time I got home I had still not checked into the accessibility of either of those films, and I don't currently own either one on DVD. So, I took the easy road, the comfortable road. (The yellow brick road?)

My friend Pooja recently asked me about this movie and the holiday and I mentioned that it is quite fun being an expert on something. Thing is, it is also quite comforting to have something familiar to settle in and enjoy.

Phil and Rita are dancing in the gazebo now. I will keep watching. But, these are enough words for today.