let's not have jokes for two hours

(An apology before I get into today's film... Today's official film; I also watched the Oscar-nominated The 100-Year-Old Man Who Climbed Out the Window and Disappeared. (Think Forrest Gump by way of Sweden if in the present Forrest inadvertently stole millions from some criminals instead of telling his story to random people at a bus stop.) Today's film is Horrible Bosses--and no, not as some thematic link to yesterday's Swimming with Sharks. In fact, I've never seen Horrible Bosses so I'm not even sure how related the two might be. Horrible bosses, obviously. But, that's a big part of so many movies. 9 to 5, for example. And, that is where we get to my apology. For, you see, yesterday was Day 925 of this blog, and I did not plan ahead so that I would be watching 9 to 5 on that day. And, watching 9 to 5 on Day 925 is just... poetry. Like if I had not watched 300 on Day 300...

Ugh, we begin with Voiceover. Does it tell us anything that a line or two of dialogue couldn't tell us? Now, if this dialogue continues as commentary throughout the film, I can forgive the opening, but if not... Then it's just better left excised--

Ah, I spoke too soon. Not only does Nick (Jason Bateman) narrate, so does Dale (Charlie Day). This could be fun.

(But, had I not been watching Groundhog Day every day then, 300 would have been perfect for Day 300.)

Kurt (Jason Sudeikis) as well. This better a) continue throughout the film and b) ADD TO THE DAMN MOVIE. Just saying.

(The thing with this third year with the blog has been me winging it a bit. I'll figure out certain movies ahead, but day to day, I could watch whatever, write whatever. I find themes and I explore them, but I do not plan out the entire month like I did in the second year.)

Back to Nick and he's not narrating anymore. Was this just the usual opening narration times three? Damn it, movie!

(Anyway, these parentheticals--my point is, I am sorry that I did not account for the potential poetry. Especially when I actually did plan this particular month quite meticulously. In fact, four times I have adjusted the plan, including an overhaul of the entire rest of the month yesterday, removing a few of the films I had planned and inserting a few different ones to maintain the setup for the month... Which at this point, you would just have to figure out for yourself because I don't want to explain it just yet. (That photo yesterday, though, was a good clue.) Meanwhile... Horrible Bosses.)

A tangent: Nick refers to his grandmother as Gam Gam while talking to his boss, Dave (Kevin Spacey), and it occurs to me that a) that is silly, and I don't mean that Dave laughs at it; I mean that Nick says that in adult company that are not also relatives. I mean, have a cute nickname that you've probably been calling your grandmother since you were too young to be able to say "grandmother" but don't force that crap on the rest of the world. Like Mike Birbiglia's La Quinta Inn line, you can't make me speak cute, I didn't press 2. And, from my tone here, you could probably guess b) my family didn't really do nicknames. Not for grandparents, barley for kids. My mother only called my Little Robert because my father was also named Robert. One grandmother--the one that lived here in California--was just Grandma. The other was Grandma Black. (In case you're new to this blog, note that my last name is black. That wasn't a race thing. Plus, for the record, I'm only being all defensive about it because I thought that would be funny. If I wanted an actual race thing, today, I would complain about how all three main characters here are white guys with brown hair. Typecast much?)

Meanwhile, I haven't said much about Horrible Bosses so far but to complain about the utterly pointless, and in retrospect rather inane and stupid, triple voiceover that opened the film because, I guess the few really funny bits that have come since (like Bobby (Colin Farrell) telling Kurt to "trim the fat" at the company by firing the fat people) were... I was going to say someone more clever than whoever wrote the opening of the film, but really, I'm not sure how clever any of this is. Given the parenthetical reference to 9 to 5 above, I'm not sure that the plot here is particularly clever or novel. It's a nice excuse for some people to say and do some very bad things and we get to laugh because the movie is telling us that they are bad people. But, that opening... It's just lazy. Like, I don't know how to tell you who my characters are so I'll have them each give a quick intro/bio. It's screenwriting 101, for Phil's sake. Seriously--and I quote:

RULE #1 - YOU DO NOT HAVE A CHARACTER NARRATE AT THE BEGINNING (AND MAYBE END) OF YOUR SCRIPT JUST BECAUSE YOU ARE TOO LAZY OR LACK THE CREATIVITY TO CLUE US IN TO SAID CHARACTER'S PERSONALITY TRAITS AND LIFE SITUATION WITHIN THE CONTEXT OF ACTUAL SCENES, AND REALLY, IF YOU DO NOT REALIZE THAT ALREADY, YOU SHOULD PROBABLY GET OUT OF SCREENWRITING AND GET A REAL JOB, MAYBE BE A PRODUCTIVE MEMBER OF SOCIETY.

I have no idea what that's from.

Really, I just made it up. Doesn't make it wrong. 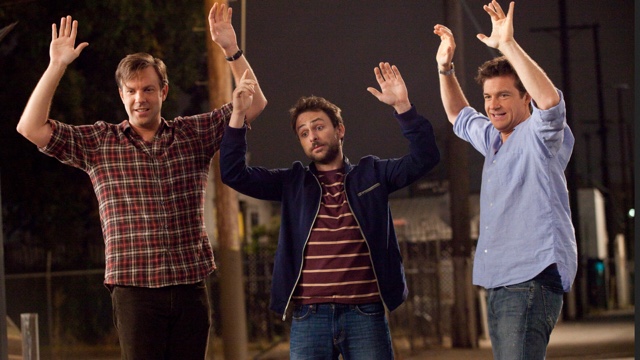 Sudeikis is probably the high point here. Dean "Motherfuckah" Jones (Jamie Foxx) says he doesn't know their names--he's a hired killer and Nick wants to know that the job won't be traced back to them--and Kurt (Sudeikis) immediately tells him their names. You know, just being polite.

Unfortunately, Kurt also makes the overt link between the second half of this film and Strangers on a Train. But, then that gets turned into a joke because Dale mixes that film up with Throw Momma from the Train.

Some great physical comedy with Charlie Day trying to get under the garage door.

Bateman almost hangs a lampshade on the lame cat scare. Almost. The second cat scare actually makes up for the first one. That shit is hilarious.

The debate over who will be more rapeable in prison... Not so much.

And, this exchange was a beautiful thing (MINOR SPOILERS):

Motherfuckah: You guys ever see the movie Snow Falling on Cedars?

Dale: I love that movie.

Motherfuckah: What happened was is that I took a video camera into the movie and I bootleg it. They was waiting right outside the exit. They got me.

Nick: You did ten years for video piracy?

Motherfuckah: They take that shit so serious, man.

Dale: Not that seriously.

Kurt : We've been taking murder advice... From some guy whose biggest crime is taping an Ethan Hawke movie.

Then, Motherfuckah turns and glares at Kurt.

Motherfuckah: So you do know that movie.

Kurt: Everyone knows the movie. That's not the point.

And the Good Will Hunting bit amused me.