what is that which gives me joy?

(Officially, today we're going back to the 80s to go back to the 20s and 30s with The Untouchables. But, as I'm trying to get over being sick for a week, I wasn't doing much but sitting around the house anyway, and for me that means movies. Notably, Cinderella, Youth, The Hunting Ground and Racing Extinction. If you don't pay as much attention to the Oscars as I do, each of those films has one nomination. I now have just one Foreign Language Film nominee to watch and I will for only the second time ever, have managed to watch all the nominees before the awards. And, that film--Embrace of the Serpent--is in a theater in Santa Monica. Bit of a distance, bit of a cost, without my own car, but maybe I'll borrow one next weekend, get it done just in time for next Sunday's awards.)

The Untouchables was nominated for four Oscars and won one. One of its losers was Ennio Morricone, nominated for Best Score. He's nominated this year for The Hateful Eight. He's 87 years old. Its winner, Sean Connery, nominated for Supporting Actor, was 57 when he accepted his award. It was also nominated for Art Direction and Costume Design. It lost both of those awards (and Score) to The Last Emperor.

The movie begins with local celebrity Al Capone (Robert DeNiro), being interviewed. For the papers while he's getting a shave. They ask him outright about violence, but it's like they're more amused by the possibility that his guys might use force than at all horrified by it. This is a guy that people like. They are harder on Eliot Ness (Kevin Costner) at his press conference.

I like that that the first thing the film has Ness do is fail.

Then we get to see just how well off Capone is. It's a simplistic contrast but it works. 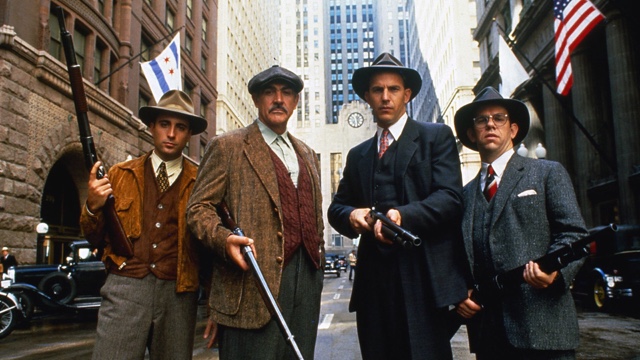 This is a movie I've seen many times--we had it on videotape when I was a kid. Not as many times as more fun fare like Romancing the Stone or Halloween, but it came up in the rotation from time to time. It's one of those movies I'm comfortable just sitting and watching. For me, this was Kevin Costner coming off Silverado, so the horses and gunplay at the Canadian border would've worked well on 11-year-old me. Four men versus the mob staged as modern western. Plus, I was probably nerdy enough to appreciate Wallace (Charles Martin Smith) going gun crazy. I knew Connery from his Bond films, well, Never Say Never Again, at least. And, Highlander. Juan Sanchez Villa-Lobos Ramirez. I loved Highlander. Saw that movie at the United Artists theater that, alas, is now a school supply and partly a restaurant. The Untouchables--we probably saw that. at one of the theater's in Hastings Ranch.

I don't think I'd seen a DeNiro film at that point in my life, though I would have heard of him.

I was even watching the Oscars already, though not obsessing about who might win or lose just yet.

I like that at 11, I could sit through a nice drama like this, a comedy like Mannequin, Innerspace, RoboCop, Predator, Lethal Weapon, Harry and the Hendersons, The Princess Bride, Spaceballs, Moonstruck, The Lost Boys, Dragnet, La Bamba... and more. So many different movies. Not sure my kids have the patience.

I also wouldn't know about. Battleship Potemkin until I was at USC, but the stroller bit here was awesome as is. Stone (Andy Garcia) on the floor, balancing that stroller on his leg, taking that last shot. That is 80s film gold right there.