Elijah Wood, especially as a kid, has a tone to his voice that limits his vocal range that doesn't mean he has to be as ridiculous and melodramatic as he was a few too many times in North. 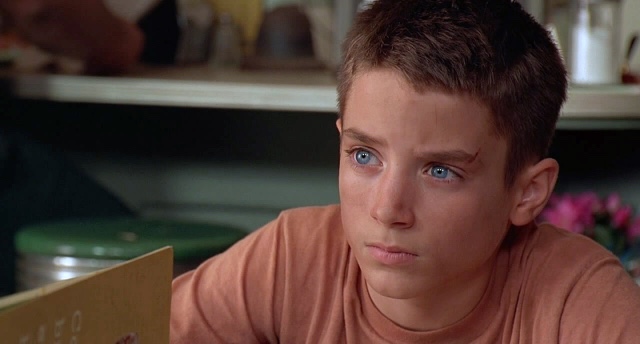 Today: The War. Same year as North, but a much better showing from Wood. The film doesn't have too many notes to hit, and it hits them in such obvious ways most of the time, but I have loved it since I first saw it at a free screening at USC just before it was in theatres proper.

(Full disclosure: I also used parts of this film in two different interp speeches my first two years competing in speech and debate, so I'm a little attached.)

It's got this nice combination of childish innocence and a keen adult sense of how horrible life can be. Something I loved about some of Stephen King's early novels, a tone I put into the a few of my own. I guess it's easier to explore some of the darkest of the see through eyes that don't understand it, because we all love to imagine that we don't understand violence or the urge toward it.

And, I'm not sure I even mean to make any bigger point than that today. I mean, that's probably why so much of our cinematic fantasies include violence and war--we can pretend that's not reality. When even our childish games can turn to conflict and war.

Or maybe there's the opposite point to be made as well--the positive side. As Stephen (Kevin Costner) just told Lois (Mare Winningham):

Well I don't want our kids growing up thinking they're powerless because of me. Everything they do in this world has a consequence. Our children still believe in miracles. They still believe anything is possible. As long as they believe like that, they're gonna be something. They're gonna make a difference in the world. That means I made a difference.

An urge to violence might be an apparently natural thing, but so is an urge to peace, an urge to friendship and love and building rather than destroying. And, that's what this movie does to me--it brings out the bleeding-heart liberal hippie I was born too late to be.

(As if that's a side of me that doesn't come out all the time in this blog.)