i want a new thing

Sometimes, things don't go as you plan. The movie I had planned for today--it turned out it was unavailable. Couldn't even steal it, not that I'm admitting I would.

Watching What's Eating GIlbert Grape the week that DiCaprio is going to, as they say, finally get himself an Oscar, seems appropriate. It was even on one of the earlier incarnations of this month's schedule.

Then, it had to start with some unnecessary voiceover. It's like a sickness. Like Hollywood doesn't have confidence in its ability to introduce a story without some extra exposition...

It occurs to me now that I'm doing the same here. You don't need to know that the order of movies got mixed up. I could just jump right into What's Eating Gilbert Grape. To be fair, this blog is not a movie. Also, I have never written a screenplay that used voiceover.

Plus, I'm not sure there is a main action today. I hadn't planned for this movie--combine that with it being a movie I like and this will be one of those entries where I go like this:

It's like a dissolve in a film. We've just jumped forward in time and I'm just sitting here enjoying the movie.

I'd forgotten about when Gilbert (Johnny Depp) nearly hits his sister with the truck. On purpose.And, Crispin Glover and John C. Reply as Gilbert's friends are fairly amusing. I'd forgotten they even existed.

Sometimes, I feel like I'm failing at blogging about movies when I do the dissolves, like I didn't have enough to say. But, I have written so many entries that went above and beyond my usual goal word count in the past 2 1/2 years. I think, on balance, I am still very much ahead. Plus, there are two points: 1) this month in particular, I don't mind the empty space so much. Like I'm drifting in and out of this seemingly random series of movies. If you're paying attention, maybe you see it. But, you're not supposed to see it until later. 2) I think next month is going to be very wordy. Far fewer movies, and far more words. 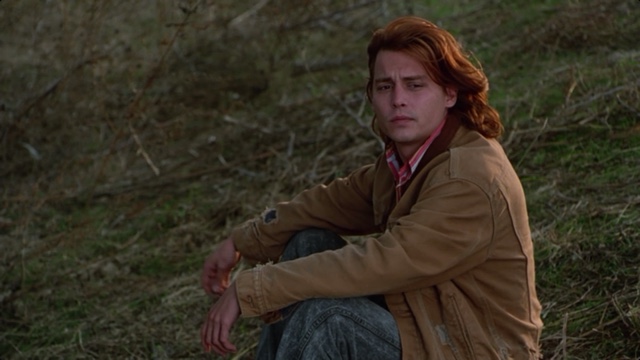 And, that's as good a place to end as any. Gilbert Grape, alone. That's kind of what he needed, I think--some time away from his brother and his mother and his sisters and his boss and Mrs. Carver (Mary Steenburgen). I've lived in a smaller town than Gilbert does. I am glad that I was not there long.