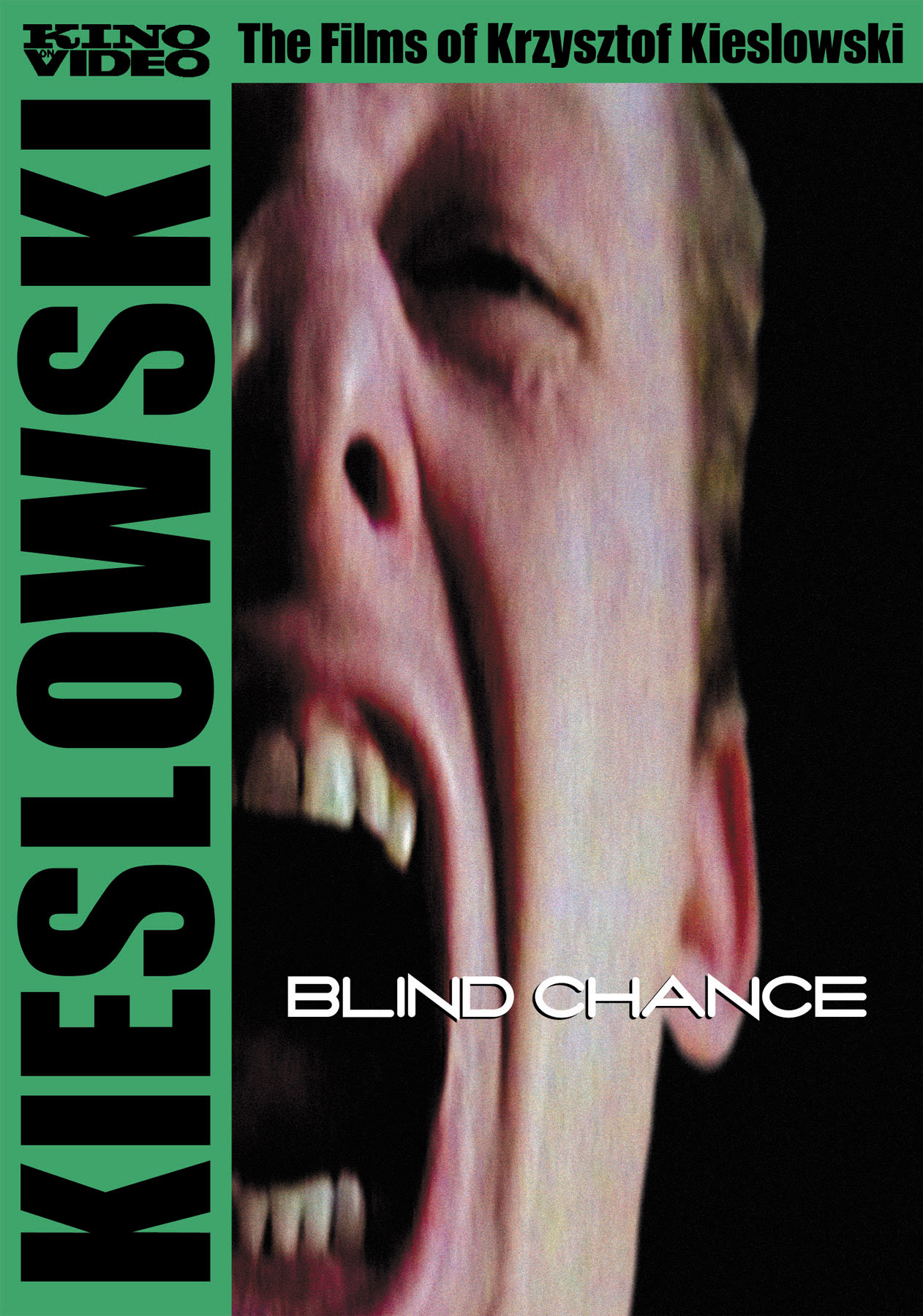 It’s basically Run Lola Run structurally, with a little more of the gravitas of Sliding Doors—

and I did not expect to use the word gravitas in connection with Sliding Doors. I like the movie, but that just wasn’t a word I would have put to it

—a slow-paced alternate-reality story about, well, chance and choice in decided one’s fate. It starts each of its three segments like Run Lola Run does, minor variations that don’t really mean anything, but those lead to more significant opportunities in the life of Witek (Boguslaw Linda) when he a) makes his train and meets an old communist and joins the Communist Party, b) misses his train, knocks a guard to the ground and receives community service which eventually leads him into an anti-Communist group and religion, or c) misses his train but has no altercation with the guard, meets a girl on the platform and goes to medical school. It got me thinking, not about fate or predestination or any of those big things, but something… bigger. People.

(Here, you might recall my Mother’s Day entry which ended with lyrics from “For Good” from Wicked and the suggestion that,

We like to believe in free will and personal agency, that we are who we choose to be. And, on some level, that must be true. But, we are also the sum of all of our interactions with everyone we have ever met, and the chemical impulses brought on by our genetic makeup, and the whims of serendipity.

Something between the likes of Social Learning Theory and, really, so many of the Communication Theories I’ve gone over in the past year (in Grad School, not in this blog)—the idea being that we are built not (necessarily) from our own choices but also from all of our interactions with the choices of others.)

People we meet along the way in our lives change what we do, who we are. Life is just a series of interactions that affect us, significantly or insignificantly. For example, I am a Grad Student in Communication Studies because I enjoyed (and wanted to teach) competitive speech and debate as an undergrad. I had only returned to college in my 30s because a) I wanted to take a Korean class because my daughter was going into a dual-language (English and Korean) elementary school program, b) I had dropped out of college the first time when I went right out of high school, and c) to be honest, going back to school seemed easier than going back to the sad monotony of an office job. I joined the speech team at Glendale Community College because in the requisite Speech 101 class I got compliments on the way I spoke, the way I seemed to be telling the audience a story more than presenting an organized speech at them. I eventually transferred to California State University Los Angeles (and its speech team) and now, as a grad student there, I coach for the speech team.

But, let’s backtrack even more.

Saer was only going into that kindergarten because I and her mother had gotten together when we did. We only got together when we did because I was at a certain stage in getting over my previous girlfriend at just the right time. I had only been with that girl because of a slightly unwise attempt to move on from a previous girlfriend. I had only started that doomed relationship—keep in mind, all three of these relationships began online, back when that was barely a thing—because I had a very introverted 20s, dividing my time between office jobs and a whole lot of movie watching.

I have moved on from the office jobs.

I would continue backward but I am neglecting the people in the telling of this story. For example, I transferred to CSULA from GCC specifically to major in History, ostensibly to teach it, because of a convergence during my first full semester at GCC of the HBO broadcast of the John Adams miniseries and an amazing history professor, Gordon Alexandre. I was inspired toward History and would only gradually drift toward Communication. And, I was also inspired in some respect by my (ex)wife Sarah going back to college a year or two before that. Even though I had once written (and posted online) an essay entitled “the purpose of college”—

(I no longer link to that essay on my website and I think the writing and the argumentation there is a little amateurish, but I provide the link nonetheless.)

—in which I argued against the now ubiquitous notion that we all—keep in mind that I am talking American students here—have to go to college, I saw (only a little at first, but later more) good reason to go back to college to finish the degree I never got after I dropped out many years earlier. While I was with Miranda I would not have considered going back to college. And my relationship with Katie was short-lived enough that it never came up. In my early 20s I wouldn’t have had the inkling to go back to school—and wouldn’t have had a clue how to pay for it either; in fact, the primary reason I dropped out of school in the first place was because of a mishap with my financial aid paperwork.

But, I digress from people again.

This blog wouldn’t exist without my history writing. My early work mimics Stephen King often because that was much of what I read in my teens into my 20s. Without talk about writing with Sofia at one of my longer-lasting office jobs in my 20s, or without a certain by-email audience for one of my stories when I was 23, I probably would have given up on writing that had been going nowhere since I was still in high school. Hell, I’ve still got some unfinished stories I wrote as far back as 4th grade, but if not for that email audience or my girlfriend at the time (Katie) liking that story, I might not have continued. My earliest meaningful interaction with my then future wife was about my writing, as well.

But, this isn’t about me, exactly. This is about you. This is about Phil. This is about everyone. We have that certain friend who engages our interest in, say, Star Trek so our nerdy side gets bigger for a while. We have that certain significant other who doesn’t care for unique interests much, so we drift away from them a little. We have another significant other who fuels our creativity (or more vaguely, our interests in whatever) and we jump back into writing (or what have you). Phil meets Rita, who he sees as a genuinely kind person, interested in the world and the people around her, or maybe he doesn’t make the efforts he does to become a better person. I have argued more than once that Phil does not become a better person because of his interest in Rita, but the film begs us to assume that he chooses piano not because it happens to be playing on that particular day that he is sitting in the Tip Top Café reading, but because way back when, however many resumptions earlier that it really was, Phil heard Rita mention that her perfect guy plays an instrument. Somewhere, maybe deep down in his subconscious, Phil then thinks of the perfect guy playing an instrument, and so when he hears that piano he wants to learn it himself, because what else is left but to become the perfect guy?

(A minor nitpick on myself there, because in that very scene in which Phil hears the piano over the radio—which Ramis tells us in the commentary is why he thinks to learn piano—Phil already has a copy of Johann Strauss - Father and Son - A Century of Light Music by H.E. Jacob in his stack of books. He’s already reading about music. Of course, he also has a copy of Treasury of the Theatre: From Aeschylus to Ostrovsky,edited by John Gassner (another volume by the same editor (From Henrik Ibsen to Eugene Ionesco apparently includes The Cherry Orchard by Chekhov…

(Which reminds me, I got a book of Chekhov’s plays a few months back and have yet to read any of them. I’ve got a couple weeks left. Better late than never.)

And you would not believe how easily I can get sidetracked by the likes of a blurry book title.)

Anyway, I figure this topic will linger. And, it is late.

Today’s reason to repeat a day forever: to imagine a new future arising from my interactions with each person I meet.