every morning i wake up without a scratch on me

”Anything might have been anything else and had as much meaning to it”
--Tennessee Williams, “The Malediction”

The thought is a complicated one—and I’ll get to it below—but first, I like the idea of that quotation given what I’ve been doing with this blog a lot, lately; I’ve been sublimating my interest in Groundhog Day with other—albeit thematically-related—films. The discussion continues, though the angle is twisted. 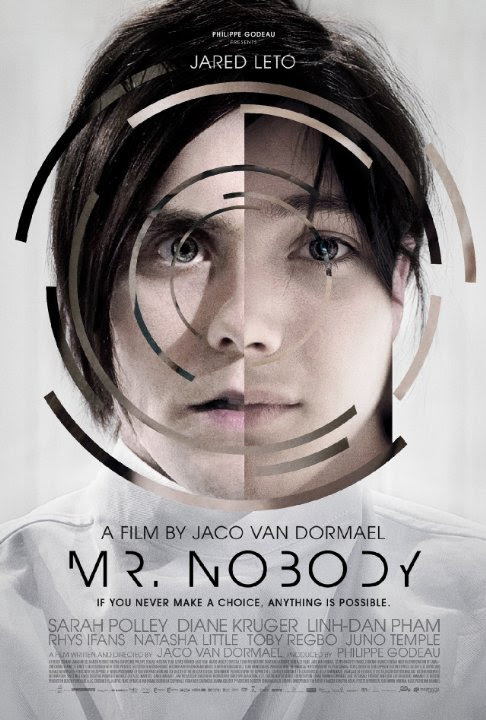 Tonight it was Mr. Nobody, a film that doesn’t deal in a time loop but does deal in disjointed time and alternate realities based on choices—a lot like Run Lola Run, Sliding Doors, Blind Chance. Nemo Nobody (Jared Leto) is the last mortal human in the year 2092 (maybe), and he is either being hypnotized by a guy with facial tattoos or being interviewed by a reporter using a tape recorder he “borrowed” from a museum. He’s recalling his life, especially certain moments where choices led to his life changing one way or another (or sometimes another). He’s telling each version of his life after these moments as if they are all real. He goes with his mother when his parents separate, he goes with his father after his parents separate. He marries three different women (each of which are introduced as children but reappear later), though—SPOILERS—he seems to keep coming back around to one of them. It’s a fascinating film, though I’m not sure it’s quite about what it’s narrator thinks it is about. 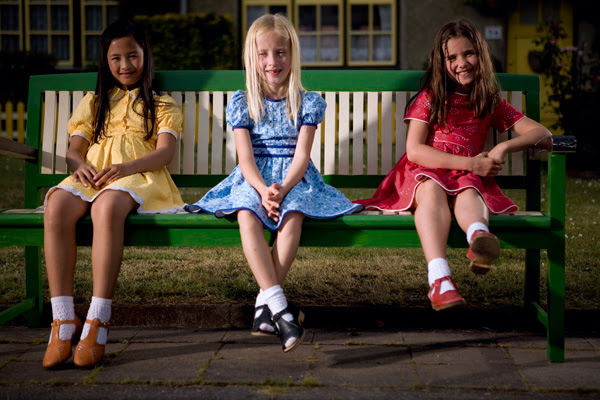 Take, for example, the moment he has to choose between his parents. Nemo is nine, the three of them (Nemo and his parents) stand on the platform at a train station called Chance (literally; it’s on the sign). His mother is leaving and he can go with her or stay with his father. The way the film ends up taking us, we learn that this moment is the singular moment that ties all the various threads of Nemo’s life together. In fact, the entire film might be taking place within nine-year-old Nemo’s head there at the station. And, old man Nemo seems to think that this was a matter of choice. It may be that, but not initially (more on that in a moment). We see Nemo run after the train and get on with his mother. Through more of the film, he will, by living with his mother, get together with Anna, the girl who is supposed to be his stepsister, which is part of what breaks up his mother and her father, separating he and Anna. He will meet her later at Grand Central Station (I think) along with her kids. We also see Nemo—and here is why I think calling this choice is problematic—run after the train, lose a shoe, stumble and be left behind with his father. He never chooses his father.

The combination of two versions of his run here reminded me a great deal of Everclear’s “Wonderful” video, that moment where the little girl splits in two to be with her mother and chase after her father.

Anyway, because Nemo lives with his father, he will try to get together with Elise at a school dance. This won’t end well, at first—later he will rewind to their parting moment and they will also marry eventually, though she will hold onto feelings for another guy, which will eventually end the marriage and Nemo will find Anna again—and Nemo will make up his mind (at 15) that he will marry the first girl who dances with him at another (?) school dance; thus, he also marries Jean.

If you’re not getting a Groundhog Day vibe yet, here’s Anna’s response to Nemo telling her that he can tell (or possibly remember, given the end of the film) the future sometimes: “It doesn’t seem like it can be much fun knowing what’s going to happen.” Phil has fun with it, and eventually finds ways to maximize the good he can do with it, but I imagine he had those moments where knowing what was coming just made life boring. Repetition is not good. But choice is difficult because it negates all other possibilities. That’s sort of the point, or a point anyway, to Mr. Nobody. Nemo, as the three girls say hi to him at age 9, explains: “If you mix the mashed potatoes and sauce, you can’t separate them after. It’s forever. The smoke comes out of Daddy’s cigarette, but it never goes back in. We cannot go back. That’s why it’s hard to choose. You have to make the right choice. As long as you don’t choose, everything remains possible.” At one point later in the film, he will scrape YES and NO onto opposite sides of a coin and flip that coin to make his decisions, like Two-Face without the acid scars.

Phil gets to play with the possibilities. But, I would suggest that too many possibilities would be just as bad as narrowing them all down to just one (in Nemo’s terms, anyway; in reality, the latter is just life). Too many options reduces the importance of each one. I’m reminded of Grant Morrison’s Arkham Asylum, to come back to Batman. In trying to cure Two-Face of his obsession with duality, he is first given a die to roll to make decisions then a card deck. But, imagine having to assign six choices to the numbers on a die, or 52 choices to the cards in a deck. By the time you even know what your options are, you’d be out of time for a few of them to be possible anymore, I would think. Similarly, Nemo’s life story here is so convoluted and contradictory that it’s a wonder that it makes sense at all.

And yet it does.

Too many options—Weick’s equivocation—or just two, Platonic white and black horses, I suppose.

At one point, Nemo nearly dies in an accident—assuming I lined up certain events right—and his wife suspects it was no accident when she finds this bit he has written:

There comes a time in life when everything seems narrow. Choices have been made. I can only continue on. I know myself like the back of my hand. I can predict my every reaction. Everything is predictable. My life has been cast in cement with airbags and seatbelts. I’ve controlled everything. I’ve done everything to reach this point and now that I’m here, I’m fucking bored.

I can imagine a similar sentiment from Phil Connors when he’s in the middle of his depression.

So much of Nemo’s story hinges not on choice but chance, though, which bothers me a little. Old Nemo clearly thinks it is about choice, but most of the film doesn’t agree. Eventually, we learn of a third option that day at the train station. Instead of yelling after his mother when he can’t reach the train, or going back to his father, Nemo turns and runs up the nearby road, into a future we (probably) haven’t seen throughout the film. But, the movie saves this third option for so late that it almost seems contradictory to the theme. Like Helen in Sliding Doors or Witek in Blind Chance, Nemo’s life comes down to catching or not catching a train. It’s the butterfly effect—happenstance more than choice creating a chain of events that can twist and turn with each successive “choice”. Nemo actually explains, when a raindrop makes Anna’s phone number unreadable:

You know why I lost Anna? Because two months earlier an unemployed Brazilian boiled an egg. The heat created a microclimate in the room, slight difference in temperature. And heavy rain two months later on the other side of the world. That Brazilian boiled an egg instead of being at work. He could have lost his job in a clothing factory because six months earlier I would have compared the price of jeans and I will have bought the cheaper pair. As the Chinese proverb goes, “A single snowflake can bend the leaf of the bamboo.” Jeans production will have moved to other countries…

Nemo removes his own agency time and time again in his story, with comparisons like this. Is there a butterfly effect to everything we do or everything that happens to us? Sure. But, just like each link in that chain of events is influenced by what came before it, it is also influenced by our conscious intervention. Nemo chooses to pursue Anna because he loves her, Elise because she seems interested at least briefly, and Jean because, well, she’s there. Phil pursues Nancy because she’s there; Laraine because, well, willingness to wear a short skirt on a cold night, I suppose; and Rita because he thinks he loves her (or simply wants to conquer her because he’s conquered everyone else, and the love and/or admiration comes later). Different reasons, similar choices. And it’s how we each build ourselves, choice after choice after choice. Plenty of outside forces jumping into the mix as well, of course. But, as Phil learns in the time loop, if you focus on the parts you can control, things can go as well or as poorly as you want them to go. Doesn’t mean you have to rush; Nemo quotes a hindu saying, that “if you slow your breath, time slows down.”

Today’s reason to repeat a day forever: to breathe… slowly.