is that not good?

1. I am currently "watching" Stargate SG-1 - "Window of Opportunity" and playing Carcassonne. I watched Groundhog Day this morning.

2. Yesterday's blog entry was not good. It was so not good that I don't even want to link to it here like I usually would. I do not want that trash just one click away... even though it's right over there in the list of links on the right.

Role switch for Tru and Jack, and Tru's father says to Jack some crap about how his role has always been to make sure the day ended just like it did last time. Except, as I have complained before, until Jack showed up in town part way through season one, there was no one making the day change to counter Jack... unless there are rewindy people in every major city. Hell, maybe that's why Phil Connors was repeating his day. He was there to make sure the Old Man died. So, other than the days Phil tried to save the Old Man, I must wonder who was trying to help the Old Man on all those other days. Or was Phil just a really confused rewindy type who didn't have anyone to tell him what he was supposed to do. 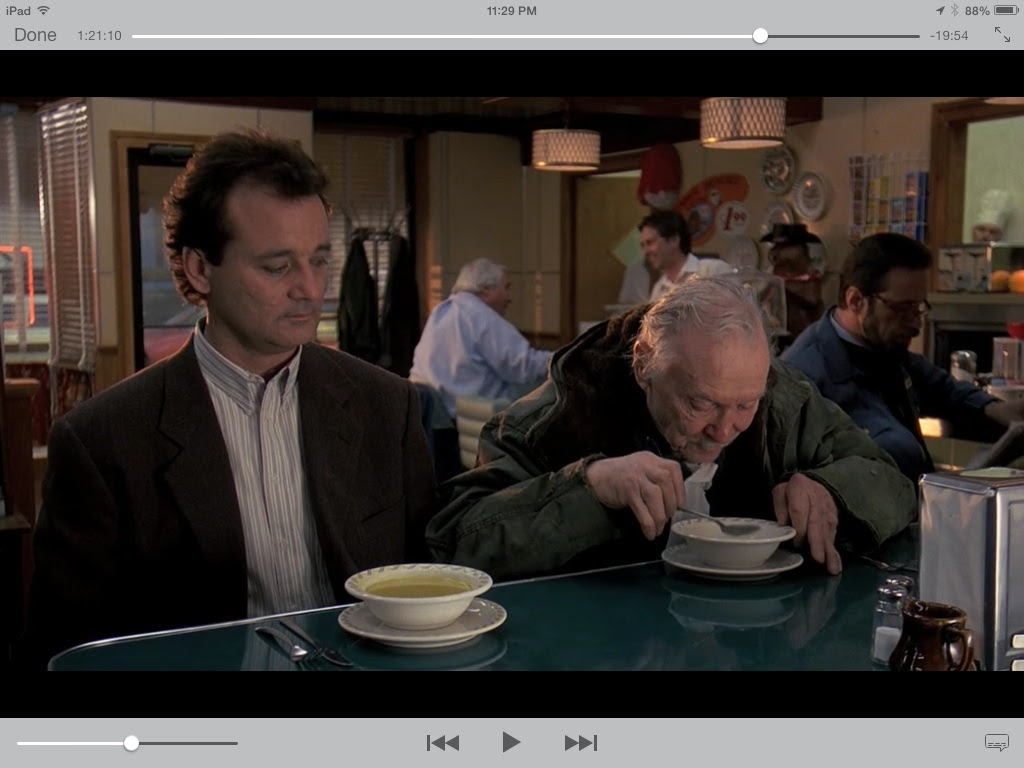 Really, though, Phil needed the redemption of the attempt to save the Old Man. It wasn't important that he actually save him, just that he actually take the time to care. To care about a guy in O'Reilly's position, to actually care about a homeless guy dying alone in an alley--that was not the purview of pre-loop Phil Connors. But, Phil worked in the city, made money on the backs of the steelworkers, and the other good people, of Pittsburgh. Recall Daughton (1996), who I've cited many times before, arguing, "Phil's situation, trapped in the time loop, parallels that of the economically disenfranchised, the Other" (p. 146). Pre-loop, Phil is one of the (relatively) well-to-do. In Ramis' revisions of the screenplay, he even drives a Lexus with a car phone. We don't really see signs of Phil's class, per se, in the film version, except for his expectation

(mostly as "the talent" more than just as a guy with a good job; hell, he doesn't even believe he has a good job)

of getting his way all the time. The disenfranchised, the homeless--they don't get their way. It's simplistic but it's true. Again quoting Daughton, through the film, Phil changes a lot, "finding things to admire in people he once treated with contempt, people he would initially have identified as Other" (p. 149).

Meanwhile, by the way, Jack is learning to (maybe) actually care about someone, since the body asked for his help this time. He still lets her die, but he feels bad about it. And now, Tru Calling's penultimate episode, "Enough," has started.

But, I was talking about Phil Connors. Phil's situation--if we assume some cosmic force beyond Harold Ramis and Danny Rubin put him there in the time loop--reminds me of what I've read of Burke's pollution purification redemption cycle, or Burke's notion of guilt. As Stevenson (1999) describes it, pollution is "categorical guilt, a feeling of worthlessness that we are driven to overcome," purification is the "symbolic acts... through which we attempt to remove the negative experience of pollution" and redemption is "increased self-worth" that comes from that purification process (p. 192). In terms of Jack Harper, he would have had to not let that girl die in that last episode of Tru Calling, but then the whole dynamic of the show would be off kilter. In terms of Phil Connors, pre-loop Phil's life is polluted with worthlessness for sure, but the illusion that he's important sits right alongside the idea that he isn't really worth anything. So, he does what he does, does his weather reports but makes jokes out of them, insults his coworkers, picks up female coworker after female coworker (taking previous drafts into account), and acts shallowly in the moment--the same kind of stuff he does with a bit more gusto once he learns that he can harness the time loop for all of his hedonistic urges. Really, he just wants to connect with people but he can't manage it so he treats them like objects for his temporary affection or his comedic jabs. In Punxsutawney he has to learn to treat people differently even when it doesn't, on some level, matter.

That is to say, Phil's attempts to save the Old Man don't matter in that he cannot keep O'Reilly from dying. But, they do matter in the meaning for and effect on Phil.

(Meanwhile, the final episode of Tru Calling - "'Twas the Night Before Christmas... Again" has begun. Jack and Tru work together in this episode. I don't figure there will be any closure--they didn't know the show was ending, it was just cancelled. No explanation probably for how Jack knows as much as he does all the time--

--or what the real consequence of saving Jensen in the previous episode will be, if it will be more than just his little bout of deja vu at the end of that episode.)

I'm reminded of Socrates in Gorgias suggesting that doing bad is worth than having bad done to you. If you don't see the connection, the idea would be that doing good or doing bad have their own, inherent values (positive and negative respectively) regardless of the actual, measurable effects. Just trying to save the Old Man is good for Phil Connors. It's a symbolic act of purification to take away what, at that point in the story, is left of Phil's pollution. And, while Phil may have connected with Rita a bit on "god day" his connection with the Old Man is at once both deeper and more meaningful than the previous (or even later) connection with Rita and more shallow and less (probably) substantial... unless maybe Phil spent the day not only helping the Old Man out but getting to know him. Weirdly, Les Podewell has no lines of dialogue as the Old Man. Or maybe it isn't weird; without dialogue, we in the audience also don't get to know him. We don't get to know him except as a cute old man who needs help. And we still care when he dies and when he dies again. We are sad when Phil fails to save him. We lament as Phil laments.

(Meanwhile, it turns out Jack gets visions of what the dead body has seen recently, so one explanation down)

Since I previously brought up Burke, I should point out that Phil's "redemptive sacrifice" is not the death of O'Reilly, of course, but Phil's own descent into hedonism then depression. That is Phil's fall before his redemption, which Burke (1961) calls "part of the same cycle, with each implying the other" (p. 218). Phil must turn toward his darker side in order to rise above his old self. It's the rock bottom of a drug addict, the darkest moment before the dawn, whatever cliché works. Sometimes, even if Socrates is right, we have to do bad things to grow.

Today's reason to repeat a day forever: to do bad things.