i wait for your command

It was Rhapsody on a Theme of Paganini that reminded me of the movie Somewhere in Time a while back in relation to Groundhog Day. But, even more appropriately, there is a sort of time loop at the heart of Somewhere in Time, based on the novel Bid Time Return by Richard Matheson, as well.

I am watching it right now. 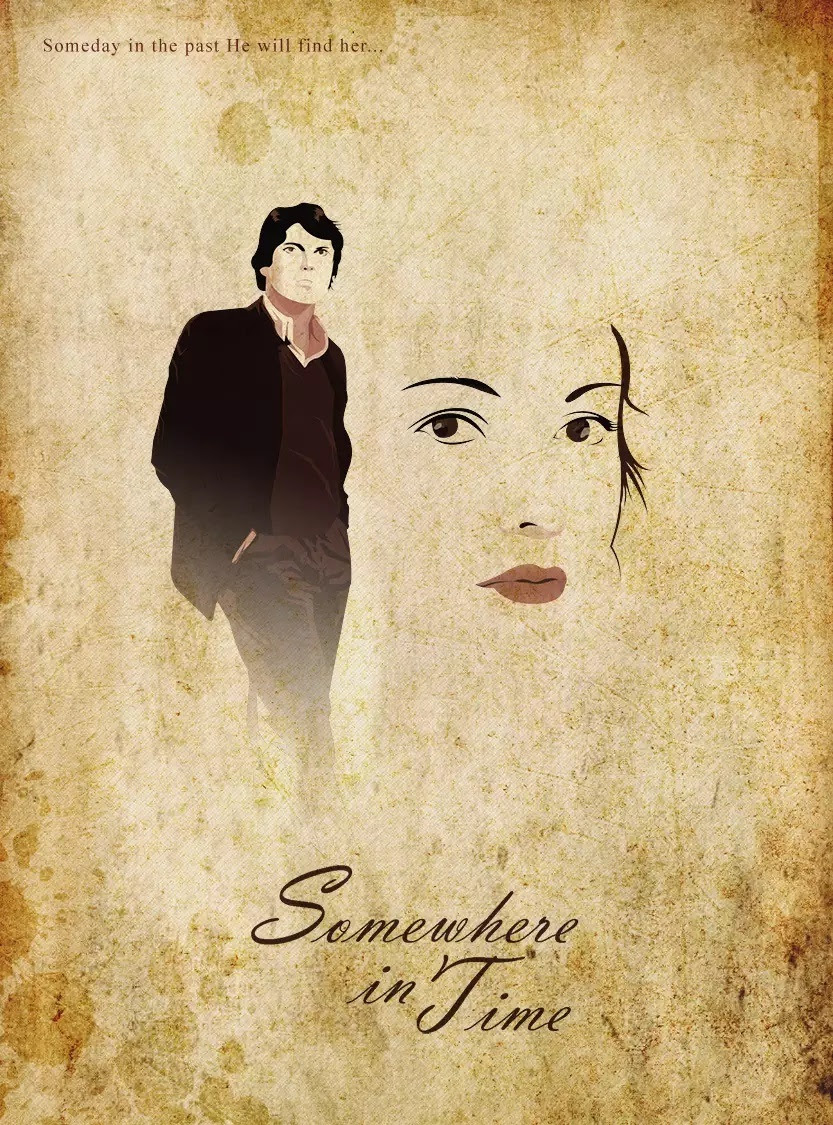 The premise is simple enough. A playwright--Christopher Reeve as Richard Collier--wills himself back in time through hypnosis to meet an actress--Jane Seymour as Elise McKenna--who, as an old woman, approached him out of nowhere, gave him a pocket watch and told him, "Come back to me."

Okay, maybe it's not that simple. But, anyway, they fall in love, yada yada yada, tragic ending.

Rachmaninov's musical piece, which Phil learns in Punxsutawney and plays at the Groundhog Banquet and quite memorably jazzes up, recurs throughout Somewhere in Time. The past section in the film is set in 1912 but the music would not actually be composed until 1934. Richard, being from 1980, knows the music well.

An interesting ontological problem exists in the film, similar to one in the TV series, Lost--there is a watch that is never made. One character--here the elderly Elise--gives it to another--Richard--and he takes it with him back in time and gives it to her. In Lost, a watch similarly loops in time with Locke.

Richard hypnotizes himself by recording himself saying things like "It is 6 P.M. on June 27, 1912. Your mind accepts this absolutely" and playing it back as he lies in bed. On first attempt, it does not work. In Stargate SG-1's "Window of Opportunity" Jack O'Neil attempts to record important information to forego having to remember it from one resumption of the time loop to another, but of course that doesn't work. Phil Connors never really needs to record anything because he's got a good memory...

Richard's second attempt, he foregoes the recording and simply recites the mantra to himself because he has found evidence he was in the past, his name in a register from the Grand Hotel where he is staying in 1980 and where he intends to arrive in 1912.

If time travel were this simple, I would try it all the time.

The interesting ontological puzzle of the pocket watch is just a synecdoche for the greater element looping around in Somewhere in Time: love. As we experience it in the film, Elise loves Richard so she comes to him in 1972 (though we don't know of her feelings or reasons at the time), in 1980 Richard falls in love with a photograph of her younger self, and wills himself back to her in 1912, she falls for him and eventually comes to him in 1972 so that he will return to her in 1980. There is no beginning to their relationship, just as there is no beginning to the watch. These two elements, as if aspects of a singular powerful force at the heart of this story, exist without beginning or end. Essentially, this would make Somewhere in Time the greatest love story ever, because its love is infinite and eternal. Phil Connors and Rita Hanson have nothing on Richard Collier and Elisa McKenna in this regard.

In terms of the film, though, the structure is interesting in that it is nearly 40 minutes before Richard reaches 1912, so a good portion of that eternal relationship happens without the two actors (or their characters) sharing screen space.

As far as smaller parts representing greater parts, it's interesting when Richard first goes looking for Elise at the theater, he finds a rehearsal in progress, and it continues despite his attempts to get information. It goes on presumably after he leaves as well. It reminds me of--and interestingly, this brings me again to Kenneth Burke--the rhetorical notion of the unending conversation. The basic idea is how a researcher should approach research--treat your part in it as if you are joining a conversation that has already begun before you arrived and will continue after you have gone. Metaphorically, then, this applies to our place in the world, in time; we come into the world, but the world is already moving along just fine without us, we do our part, leave what mark we can, and when we die, the world will move along just fine without us once again. Individually, we are but a blip on its radar (to mix metaphors). Phil Connors, stuck in time, Richard Collier, removed from time--they alter the conversation because they do not so simply step into and then out of it just like the rest of us do. That they exist on film, a medium that allows their stories to play over and over and over again, only extends the metaphor and their profound alteration of it further; these stories and other, quite literally timeless tales can also lift us, albeit temporarily, up from the humdrum repetition of our lives to glimpse something better. Like Plato's charioteer catching a glimpse of heaven.

The first glimpse we have of the younger Elise, outside of her photo, is a reflection in a window as Richard sees her from afar, an interesting choice on the part of the director and/or cinematographer. Elise is still far away, and is not even yet quite real, but only a reflection of an idea placed in Richard's head, partly by her older self.

Coming back to the unending conversation, Richard effectively interrupts the dance at which he finds Elise later, but her manager--Christopher Plummer as William Fawcett Robinson--has him removed because he does not belong. Robinson believes Richard an intruder whose presence will interrupt Elise's rising career, or to extend the metaphor, that this is not Richard's conversation in which to take part.

This is film, of course, so sheer persistence gets Elise to agree to spend time with Richard.

Richard has seen the register so he knows he will have room 416. As objects have power--the watch, for example--when he is offered the key to room 420, he nearly panics. But then, he not only gets the room he expects, he effectively creates the artifact of the register he has already seen in the future by signing his name and telling the man at the desk to mark his arrival at 9:18am, a time he already knows will be on that register. Richard is creating the past from memory.

Richard's and Elise's first "date" happens partly without dialogue, which is a) unfortunate because we cannot know what really draws them together and b) almost more powerful because their love is a thing unto itself. The details are just that, details. Abstractions.

Elise's monologue in her play:

The man of my dreams has almost faded now. The one I have created in my mind. The sort of man each woman dreams of, in the deepest and most secret reaches of her heart. I can almost see him now before me. What would I say to him if he were really here? "Forgive me. I have never known this feeling. I have lived without it all my life. Is it any wonder, then, I failed to recognize you? You, who brought it to me for the first time. Is there any way that I can tell you how my life has changed? Any way at all to let you know what sweetness you have given me? There is so much to say. I cannot find the words. Except for these: "I love you". And that's what I'd say to him if he were really here.

For the play, it's a speech mostly out of context. Elise has, as we find out right after, altered the dialogue she was supposed to say. The play and her life become one and the same in this moment. It's cheesy, but the film so readily embraces the cheesier aspects of a love story that it works.

I've cited Todd May (2012) before. May argues that "the intensity we associate with romantic love requires a future that can allow its elaboration." Interestingly, so much of the romantic love between Richard and Elise takes place offscreen, in the intervening years between 1912 and 1972 for Elise, or isolated in a library with Richard in 1980 that it twists May's point a bit. These two have no future except in the past. Similarly, Phil and Rita only have a future because we cannot really see it. We do not expect or want realism in our romantic stories. We want timelessness. We want mindless persistence and romantic urges powerful enough for one man to alter his personality day after day after day until he finally becomes a good man, or for another man to, by sheer will power, travel back in time to find a love we all want...

Love is between two particular people in their particularity. We cannot love just anyone, even others with much the same qualities. If we did, then when we met someone like the beloved but who possessed a little more of a quality to which we were drawn, we would, in the phrase philosophers of love use, "trade up." But we don't trade up, or at least most of us don't. This is because we love that particular person in his or her specificity. And what we create together, our common projects and shared emotions, are grounded in those specificities. Romantic love is not capable of everything. It is capable only of what the unfolding of a future between two specific people can meaningfully allow.

I would suggest, outside of this particular discussion, that May is wrong about that trading up thing--I think many of us give up on particular relationships because we imagine a person other than our significant other who does have more of some certain quality or another. And, we resent... settling for the particular, when some ideal exists. Somewhere in Time is about the ideal, not the particular. In the shorthand of cinema, Richard and Elise love one another in the three days or so that they are together, but arguably only because it is just those three days. There is no room for disappointment, no room for particularity to be not good enough.

Today's reason to repeat a day forever: to be particular.