why couldn't i get that day

I was in the Virgin Islands once. I met a girl. We ate lobster, drank piña coladas. At sunset, we made love like sea otters.

Phil’s problem here: he thinks the day just happens to him. He doesn’t realize that while there may be a few elements here—the girl and, well, the sea otter lovin’—that aren’t things that would be on repeat. Just like the second snowman scene we see in Groundhog Day, when Phil tried to get that same girl again, he might come on just a little too strong, and she might not be interested. Or, his assumption that they might make like sea otters might be just the thing to make her unwilling. Phil, prior to being trapped in the time loop, where his choices are limited, apparently doesn’t understand free will. Phil assumes a repeating day to be the same thing again and again, even though by the time he tells the story above, it’s Day 3 and he’s already changed the way the day goes. He’s operating under the impression still—and this is vitally important to the film, mind you—that his fate is out of his hands.

There’s a moment in Edge of Tomorrow, which I saw again today, with some comment on fate. Master Sergeant Farell (Bill Paxton) disapproves of gambling because, as Nance recites, “It entertains the notion that our fate is in hands other than our own.” The entirety of J-Squad recites Farell’s view on fate: “Through rigid discipline we are masters of our fate.” Meanwhile, I’ve got Hannam’s (2008) The Magic of Groundhog Day open in front of me, because I had a feeling it might come in handy today, and I see this highlighted bit: “This [the notion that a groundhog can predict, if not control the weather] reinforces the idea that our fate is out of our hands, that external forces will dictate what is going to happen to us” (p.xix).

(A sidenote on Edge of Tomorrow: if you recall my breakdown of screenplay structure (starting with this entry, you may remember the LOCKED IN moment. For Groundhog Day that comes about 34 minutes in, when Phil finishes his night with Gus and Ralph and wakes up determined to take full advantage of the repeating day. For Edge of Tomorrow, it is about 34 minutes in that Rita (Emily Blunt)—

yes, if you haven’t already read my comments on Edge of Tomorrow in this blog, the main female is called Rita

realizes Cage (Tom Cruise) is repeating his day and tells him to find her after he wakes up. So, his move to take full advantage of the repeating day (even if he doesn’t know what that entails just yet) starts right when Phil Connors’ does… Amusingly, the “date night” sequence then for Edge of Tomorrow consists of fight training and a lot of Rita killing Cage. Perhaps that would have been Phil’s method had he already died at that point in his time loop; when the date with Rita went badly, he’d walk outside, kill himself, and try again tomorrow.

Phil’s and Rita’s dancing at the gazebo times pretty well with Cage and Rita choreographing their way through the battlefield, which is almost like dancing.)

The plot of Edge of Tomorrow doesn’t rest long enough to contemplate issues of fate or destiny or free will. It doesn’t even spend much time on the obvious metaphor of war being like a time loop, SSDD and all that, like Repeaters’ drug addict metaphor doesn’t get much commentary within the film but should be obvious to the viewer. Of course, Groundhog Day spends no time more than Ralph’s amazingly apt line—“That about sums it up for me”—commenting on how Phil’s time loop is just life writ small, a microcosm for a lifetime.

I’m reminding of Death: The High Cost of Living by Neil Gaiman. Death tells a recently deceased man, “You lived what anybody gets, Bernie. You got a lifetime. No more. No less.”

(Cage’s depressed period comes right along with Phil’s. And, no I didn’t have a stopwatch and a notepad with me at the theater today. Let’s just say, Edge of Tomorrow is running alongside Groundhog Day like that night I mashed up Groundhog Day with Game of Thrones. Right now, Phil is calling the people of Punxsutawney “hypocrites” and Cage and Rita are getting cars after finally getting off the beach—Cage’s depressed period has a break here in the middle of it… seemingly. SPOILERS, really, this action setpiece is setup a more serious depressed moment as Cage goes it alone. And, Phil is about to steal Punxsutawney Phil… 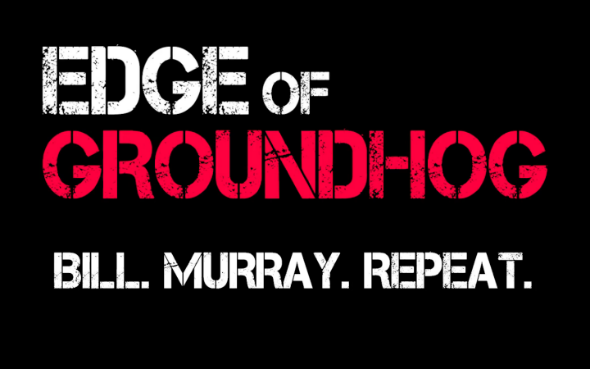 Phil just said, “we had a beautiful day together, once.” And, now Cage is inventing days he and Rita conversed rather than just trained. Their car chase has slowed down, as Phil’s gets going. Meanwhile, on that same page in Hannam’s book (because I haven’t turned it yet)), Hannam writes of “meaningless activities and conversations.” Cage is trying to make this conversation meaningful, despite Rita’s efforts to stay on task. We won’t know for a few minutes why that is—because Rita hasn’t survived past the farmhouse.

And Phil’s “god day” scene at the Tip Top comes right along with Cage knowing how Rita takes her coffee and what will happen when they take the helicopter.

”We believe that we are autonomous, independent individuals in charge of our lives,” Hannam writes, “and [we] don’t like to consider that our actions could be determined by anything other than our free will” (p. 2). I wrote just the other day about how other people alter who and what we are, sometimes at a very fundamental level. And, some events change our lives just as dramatically, for better or for worse. But, it doesn’t matter what makes your life what it is, fate, destiny, free will, the interactions with and control put upon you by others… what matters is whether or not that life is something you enjoy and appreciate, because we only seek out cause, only search for blame, when life isn’t going our way…

Well, maybe some religious types thank God for the good things when they come, but on some level, naming the cause God and not bothering to explain it further isn’t much better than not bothering with cause at all.

(Amusing timing thing: the piano music that gets Phil’s attention so that he goes to Mary’s house to learn to play—it plays right over Cage and Rita’s carefully choreographed entrance into the IUDF headquarters in London, like they’re dancing.)

During the time loop, Phil radically changes how he conceives of time. At first, time is an irritation to be endured, as he waits to return to his former life as a celebrity weatherman in the city. Then time is a resource, which he can use to exploit others. Next, it is a terrible burden to be suffered for eternity. Finally, time is a great gift, which he can use to help others and find happiness. Time remains the same; it is Phil’s attitude to it that changes. (pp. 39-40).

It’s interesting that Cage in Edge of Tomorrow is stuck working for people other than himself almost right from the start. He never really gets an adolescent period like Phil does. A learning period, sure, but not an exploitative one.

(I suppose the rest of J-Squad, who we haven’t seen in a while, are like all those supporting characters that come back for the banquet in Groundhog Day, and getting them together to go attack the Louvre—that’s the banquet.)

Anyway, I don’t imagine my words here will inspire you to change your life around if it doesn’t seem to be going your way. But, I do hope something does. If we all lived our lives a bit better, treated it less like something happening to us and more like something we’re creating each and every day (with the help of everyone else, of course), we’d be better off, I think.

(And, there isn’t much comparison between Edge of Tomorrow and Groundhog Day once they really get into their third acts—Christopher Orr, writing for The Atlantic, suggests, “If the first three quarters of the film reinvent Groundhog Day, the final quarter recalls, ever so slightly, the saggy conclusion of [another Harold Ramis/Bill Murray film] Stripes. (The script went through many iterations, and the ending was reportedly always considered problematic.)”)

Today’s reason to repeat a day forever: to get together with all the people I meet and attack the Louvre because, why not?