i can't wait to do this with my own children

I put out a request in the Day 365 party invite page on Facebook today. I want people to share their thoughts on Groundhog Day or the Groundhog Day Project and email them to me before that last day, so I can share them in the final entry. Here, I would like to invite strangers (or those I have met through this blog but that for geographic or whatever reason were not invited to the party) to share as well. So, email them to robertegblack@hotmail.com, and I will compile them and share on Day 365.

My daughter, Saer, 11 1/2, immediately wanted to write something, and then the thing she was typing got rather lengthy, so I told her I would share it as its own thing.

Saer, just now, as she was typing: "I can't believe you do this on a daily basis."

Anyway, here is what she wrote:

Being the daughter of the person who started “The Groundhog Day Project” I have seen the movie way too many times. I will admit, though, this is one of my favorite movies. I just don’t think I’ll be watching this movie anytime soon after the blog ends. My dad has watched this film 365+ times and that means I would have also seen this movie many times. In fact I feel like Groundhog Day made my dad and me closer. It has become a tradition almost to sit around the living room TV before I go to sleep and watch this movie.

Saer doesn’t often watch the entire movie, but she has certainly seen parts of it many, many times. Back to Saer:

I actually took this blog quite seriously and I was excited about it once my dad started doing it. Aside from the fact that I thought he was insane for watching a movie a few hundred days in a row which still after getting this far seems bizarre. After he went on the trip to Woodstock for Groundhog Day I felt his insanity went to a whole other level.

I won’t hesitate to admit that the 100th day of the blog I made him a cake [per Day 100] with one of our favorite lines from the movie “Bing!” 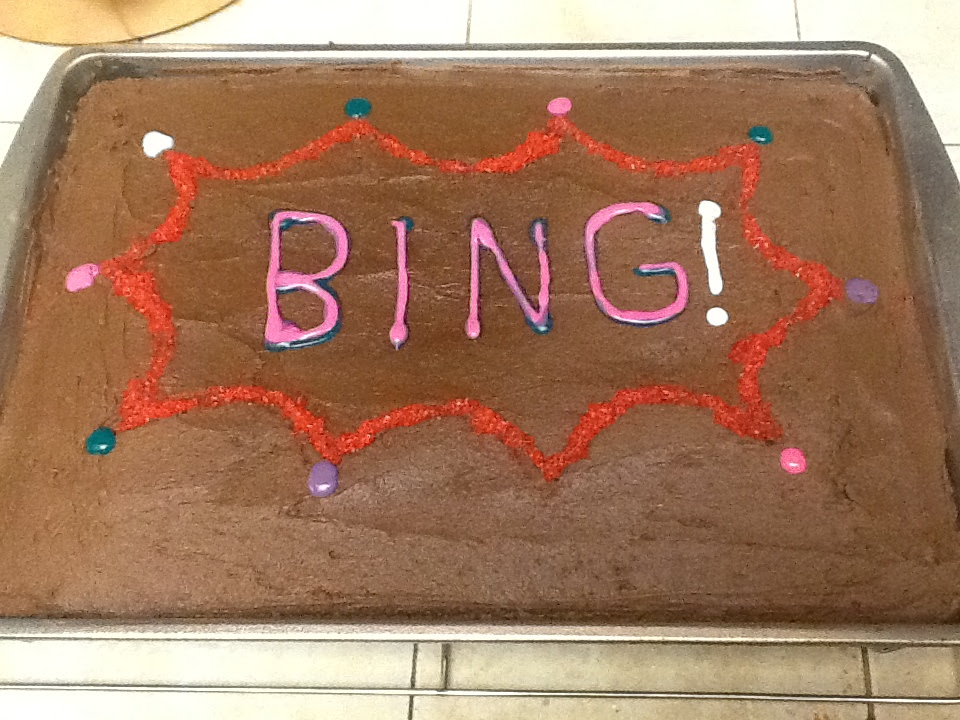 So I can definitely say I love this film and love the blog.

One of the most annoying things about this movie, in my eyes, is, I feel, Phil and Rita have no chemistry, and after the film has ended I can’t see them being a couple. This I especially think when watching the last scene of the film where Rita looks like a robot.

Sorry to interrupt again, but, yay… Day 84. Back to Saer:

Also I don’t know if this annoys people as much as it annoys me, but I think that Rita moved the relationship a little quickly. I would say Phil moved a little quickly too but, I mean, he does spend at least like 30 more Groundhog Days with her—

Saer has clearly not read my day count entry yet.

—so it’s a bit better. But after the movie, it is implied that Phil and Rita are going to live together. First of all, Rita has seen Phil being his arrogant self and doesn’t really like him in the beginning of the film. Then one day of helping a few people not only does she change everything she thought about him, but she spends $339.88 just to own him. I will admit, though, I do think that Phil changed and he did become a better person. Rita however shouldn’t expect for Phil to be a totally changed person in less than 24 hours [per my “Rita’s Groundhog Day” edit of the film]. It’s just not realistic. But now thinking about it neither is the rest of the movie with the time loop and all so I guess it fits right in.

My favorite thing about this movie definitely is Ned Ryerson. He’s odd and funny and in all of his scenes he is very interesting. I think scenes with Ned Ryerson are the scenes I’m not actually sick of yet. Realistically, if you watch a movie this many times you learn all of the lines to the movie. I love to recite them when my dad watches but my favorite character to recite is Ned by far. I also love Stephen Tobolowsky, the person who plays Ned. I actually think that the actor and the character are very similar. Mostly because they are both extremely hilarious. I’m actually kind of thankful for the blog. Without it I probably wouldn’t have met Stephen Tobolowsky [per Day 255] . I don’t just know the actor from Groundhog Day either. He was a reoccurring guest star on Glee one of my favorite shows to watch. Believe it or not in Glee his name is Sandy Ryerson. I like to make up theories as to how Sandy and Ned are related. I’ve decided that they are actually the same person. Sandy is his middle name and for some reason he started to go by it. Anyways, I guess you could say Ned Ryerson is on my top 5 movie characters of all time!

My least favorite and favorite part of the movie are actually the same. I love and hate the part where Phil helps O’Reilly.

Yes, Saer called him O’Reilly, even though he isn’t named in the film, because that is what I have been calling him for a while now. Back to Saer:

First of all, I love it because my favorite thing ever is to think of the smile O’Reilly gives when he gets even more food from Phil. However, I hate it because, despite countless tries, Phil cannot stop O’Reilly from dying. I have seen this scene many times and most times I start crying even though I already know what is going to happen. There is something that most people don’t realize. Phil spends the last Groundhog Day helping other people, nothing with O’Reilly, which means he never got food, never was given things he couldn’t normally get. I liked how he left his life on a happier day before, when Phil gave him food and spent time with him. I hate how, later, he died hungry and alone. They did film a scene where on the last day Phil leaves a note for O’ Reilly.

This was taken out of the film so what we see is that O’Reilly never got the poem. In the movie I was just thinking “Phil, quit helping that girl light her cigarette and go feed O’Reilly!”

I won’t nitpick and point out that Phil lights that woman’s cigarette at lunch and O’Reilly dies at 8:02 P.M. (except inasmuch as I just did) because Saer actually makes a good point here. I, too, lament the idea that Phil probably spends no time with the Old Man on the last day of the time loop. If this scene had been left in, then spending time with O’Reilly and writing that poem after he dies would fit right into the already complicated agenda Phil has that day.

But, let’s get back to Saer:

I’m very happy that I got to see this film and, I mean, if you were going to watch any movie everyday Groundhog Day is the best movie. I’m also extremely happy Danny Rubin wrote this amazing script, though the first screenplay was something completely different. Also I’m happy Harold Ramis directed this movie and he did it wonderfully. I’m thrilled that he [Ramis] got to help with so many movies that are so many of my favorites. Basically Vacation, which is hilarious, and Ghostbusters, which has the best soundtrack of all time. Rest in peace.

Something she couldn't find a place for, by the way--one of her favorite lines in the movie is "Who else could go for some flapjacks?"

Today's reason to repeat a day forever: despite Saer’s point, which I fully supported above, to light the cigarettes and help the old men, to do the little things and the big things…

…and find more occasions for others to do some of my work for me.

P.S. Please comment today, if ever, for Saer. Thanks.