you don't remember me

Many people thought I would run out of things to say about Groundhog Day long before Day 365 (another 2 weeks away). This evening, as I sit down to watch the film and write something about or inspired by it, I have an inkling not that they are right, but that I had too much other stuff to do today. Work on my card game, work on my short film, a trip to the science center with my daughter. And, I didn’t even get to revising my paper to be published or prepping lesson plans for my speech class for the fall, or even going over a lesson plan for the speech practice this Wednesday. Made dinner, got Saer to Improv class, and now here I am… sitting… with nothing particular to say.

I got out my Chekhov book so I would remember to read one of his plays. I’ve got 2 outings of a sort in the next couple weeks (before the Day 365 party) for this blog, but I cannot do either of those at 10:00 P.M. on a Friday.

As for topics at hand, my folder of unused Groundhog Day-related articles has a handful of articles about Bill Murray, but aside from one specific angle, I think I am finished with writing about Murray. So, those articles just might sit there in that folder, remaining unused.

As for the specific angle, that would be Nothing Lasts Forever, Bill Murray’s unreleased film from 1984. Victor (previously speech team’s president, now a fellow coach) sent me a link to an article about the film; I had never heard of it. While it “Nothing Lasts Forever has been shown at a handful of screenings (and aired on German television) over the years,” according to Rolling Stone, 11 July 2014, “it's never been released on DVD or made available in a commercial format.” But, it showed up on YouTube, but if you just clicked on that link, you’ll see it has been taken down because of that pesky thing called copyright.

Now, imagine that I am watching the movie, though I admit to no such thing. Groundhog Day on the iPad, volume low, Nothing Lasts Forever on the computer, next to this Word window. I will use my imagination as well and come up with an idea of what the movie is. 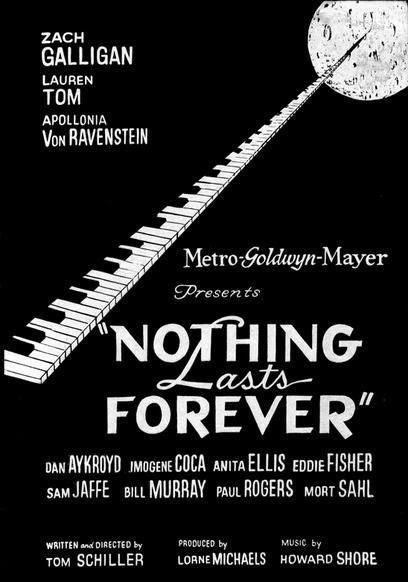 Imagine a black and white film, made to look like it was filmed in maybe the 40s, long opening credits, music playing loudly. The film stars Zach Galligan from Gremlins. The Telegraph, also 11 July 2014, tells us, “The film was intended for a September release, so as to capitalise on the success of both Ghostbusters and Gremlins, but MGM postponed the release date and then canned it altogether.”

It’s already a bit surreal, guy on the train telling the lead—character’s name is Adam Beckett—that he’s in the middle of a dream.

Meanwhile, Ned just met Phil. I’m not sure how small Murray’s part in Nothing Lasts Forever is, but he hasn’t showed up yet.

Los Angeles has been destroyed in an earthquake. I’m not sure in what year this movie takes place, but I suppose I don’t exist in its future. Meanwhile, New York is under control of the Port Authority after a general strike by bus drivers.

This Port Authority customs scene reminds me of Brazil, and that is a good thing—I love that movie. Adam intends to be an artist but has no portfolio, so he has to take an art test.

I swear the shot of the city from the sky used ants for the people down below. Awesome.

The art test works like a peep show. Curtain opens, woman drops the sheet wrapped around her, and Adam has 3 minutes to draw her as accurately as possible, while a mechanical voice tells him what to do. He fails, he manages to draw no more than, apparently, her pubic hair. So, he’s stuck with a Port Authority job in the Holland Tunnel.

His supervisor’s played by Dan Aykroyd—he overexplains Adam’s job in maybe 30 seconds. I didn’t catch enough of it to know quite what he’s doing, though part of it involves watching out for out-of-state vehicles, and part of it involves him getting a gun because, “You don’t know who’s out there.”

Now, a homeless guy tells Adam life is a dream. Adam is nicer to homeless guys than Phil Connors. He already gave money to one earlier, and this one he gives his own breakfast.

Adam’s father offers to talk to the dean of Columbia Art School to get him in, but Adam wants to do it his way. He’s an idiot.

Mara Hofmeier (Apollonia van Ravenstein), another failed artist working for the Port Authority, arrives at Adam’s booth in a gas mask… I’m not entirely sure why. They go out to a bizarre restaurant with a crooked table and people wandering around like zombies (mindless, not living dead) in the background.

They go to an art installation, a guy on a treadmill counting to a million. They get a sort of dating montage (briefly) just as “date night” gets going in Groundhog Day.

Homeless guy shows up again to introduce Adam to… well, doors that apparently open by magic, to go to a “secret subterranean sanctum” to see that “New York City is a dream created by higher beings.” The film turns to color as they descend.

The first homeless guy Adam gave money is down there, in a “chamber of purification” with a bunch of old men—it’s a sauna. They strip Adam and carry him in, then scrub him and stick him partly into a furnace “to burn out any impurities” he may have brought with him from “the physical plague.” Ticker tape representing human souls, guided by these people… I’m not sure where this is going, but the concept is interesting. It occurs to me, though, the audience for this kind of film isn’t likely to match up with either Gremlins or Ghostbusters.

Adam’s going to the moon—he’ll meet his soulmate there, her name is Eloy, pretty close to the “good” people in Well’s The Time Machine. Film goes back to black and white as Adam wakes up back outside those magic doors from before.

Murray finally shows up—he’s the bus’ “sky host” Ted Breughel. The destination sign on the front of the bus, went from New York City to Miami Beach—nice Groundhog Day link there—to the Moon. The bus took flight just as Buster’s stolen truck did. Of course, the bus kept flying, the truck hit the ground as usual and exploded.

Bus has been going to the moon since at least 1953, which seems to be a long time ago despite the look of the “reality” of the film. But, since that reality is just a dream, I guess the details don’t matter except as much as they evoke the feel of a certain era.

The bus is bigger on the inside than the outside—it’s got a nightclub inside—like the TARDIS. It’s got a “Galaxy Deck” where dinner is served as well. Reminds me of The Big Bus… which, quick sidetrack, I always assumed that was a TV movie, but it was out in 1976, so I guess I saw it on TV later.

Phil wakes for act three and the bus lands on the moon. The movie is in color again (though the lunar backgrounds are very cheesily fake. Hula dancers and leis. That makes perfect sense for arrival on the moon.

Luna 2, the first spacecraft to reach the moon in 1959, is just a prop. Even the moon tour has a lot of fake stuff. Adam hides behind the prop to get away from the tram.

Eloy is one of the hula girls, who apparently are mistreated and forced to work. There’s hint of a satire that doesn’t quite congeal here.

When Adam and Eloy kiss, the underground guys watch on a monitor, and Murray and his guys arrive to stop him. One knocks him out and he falls back to Earth. But, the trip was a success because Adam proved he could love another soul. And, Adam can now play piano, magically. How very Phil Connors of him.

And, at the piano at Carnegie Hall, right where the film began, Adam can play this time.

Eloy comes to the show—Adam got a standing ovation and thrown flowers after one song—and all is well. The End.

Or so I imagine.

Today’s reason to repeat a day forever: to just once (at least) convince everyone I met the secret cabal that runs the world and Father Knickerbocker wants to send my on a bus to the moon. Then, surprise, made it all up (or stole it from Nothing Lasts Forever) and you are all so gullible, but only because I’ve spent innumerable days figuring out just what buttons to push to get you to trust me.