Dr. Benjamin Stone (Michael J. Fox) is headed for Beverly Hills. Another doctor, one who will not be seen again in this movie, critiques his choices because cosmetic surgery is clean and no one dies... apparently medicine is only meaningful when it is a matter of life and death.

Oh, watching Doc Hollywood before Groundhog Day today. If you haven’t seen it, think Cars minus the cars, and Lightning McQueen is a doctor instead of a professional racer. 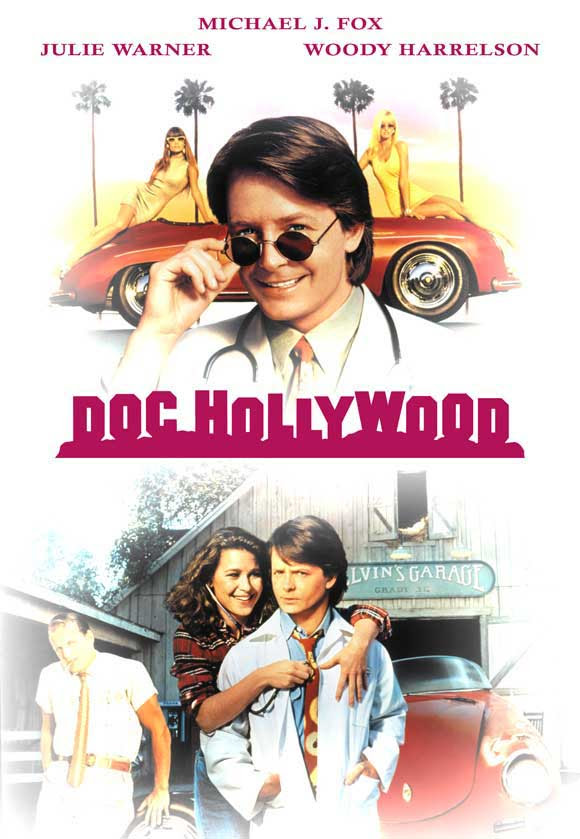 Apparently it’s based on a book—”What? Dead... Again?” Who knew? I’ve seen this move numerous times and would not have expected an actual source... not to imply that all book sources involve some clearly noticeable depth.

Anyway, like Phil Connors getting stuck in Punxsutawney, Dr. Stone is about to get stuck in Grady after he gets off the main road to avoid traffic and ends up crashing his Porsche convertible into a fence. Problem is, the local judge built that fence, so Dr. Stone is sentenced to community service. Initially, only 16 hours, but he talks back so it’s 32.

Grady is, especially at first, a lot of folksy charm and rustic naiveté. Mayor shows Dr. Stone to a cabin where he can stay and three old ladies are there with food, for example. SPOILERS—Stone is going to end up having to become a little less self-centered, learn to care about others, and all that stereotypical stuff that comes with this sort of film. Gene GeRue (2009) writes, in How to Find Your Ideal Country Home: A Comprehensive Guide, that it’s “tempting to romanticize small towns and life therein [because cultural, if not personal] Memories persist of clean, uncrowded, crime-free communities, of warm evenings on front porches, of shy boys kissing giggling girls behind blue lilac bushes.” Davies (1995), who writes about Groundhog Day as a film about white masculinity in crisis, suggests also that Groundhog Day invokes “the down-home values of small-town America” (p. 215).

GeRue, amusingly, quotes Garrison Keillor’s regular opening line from The News of Lake Wobegon “Where all the women are strong, all the men are good-looking, and all the children are above average.”

Meanwhile, as I’m getting into the idea of romanticizing the small town, Stone has been offered a permanent position in Grady, and he hasn’t even done any work yet. There was a nice line, when Stone was asked what he thought of the town, he said he didn’t know because he hadn’t seen all of it yet, and the Mayor corrected him, yes he had. The town is very small. I’m reminded of Arthur and the princess of a country so small, “Rhode Island could beat the crap out of it in a war. That’s how small it is.” And something about how they recently carpeted the entire country.

Anyway, as Stone gets to know Lou (short for Vialula), the Ambulance driver (they still make house calls), who he’s already dreamed about and seen naked, and starts to see some of the small-town patients—one couple is there just to have him read their mail because they can’t read—isn’t that quaint?)—I’m wondering... well, no, I’m not wondering, but I am concerned that we have a need to treat the small-town as some special, near-magical place that can transform a man in a matter of days.

We get a montage of cutesy scenes with patients and it’s like Stone is already the saviour come to Grady. But then, he, for lack of better terminology, overdiagnoses a boy’s condition, and the regular doctor, an old man who doesn’t even bother coming to the office, suggests a Coke. Of course, Doc Hogue is right, Stone is wrong. His new-fangled medicine is no match for the results of home-grown antacid after the boy ate some of his father’s chaw. A humbling moment for Dr. Stone.

And, by only his second day in town, seemingly, the townspeople all know who he is. And, a whole lot of them go to the local cafe for breakfast. Hank Gordon (Woody Harrelson) tries to sell Stone some life insurance—I guess life insurance is a metaphor for that down-home security of the small town. Which means Phil’s purchase of all that insurance from Ned is representative of his acceptance of Punxsutawney just as much as his knowing all the locals, saving lives, and entertaining everybody at the Groundhog Festival Banquet.

Meanwhile, one of Stone’s patients pays him with a pig (which townspeople tell him is a “fine pig”). And since the local mechanics don’t take credit or checks and Stone is working for free and his breakfast was free, money has become meaningless in Grady. Just like money means nothing for Phil Connors in Punxsutawney. Stone barters the pig for the part his car needs... I was thinking earlier, as I do, about stuff Phil Connors does when he’s not on screen. Those Wrestlemania tickets, for example, maybe he didn’t even pay for those; maybe he traded a favor for them. With the knowledge Phil has accrued by then, he could have traded a lot of disparate things back and forth around town to get what he wanted, like Jake and Nog in Star Trek: Deep Space Nine‘s “Progress.”

“You can’t poop in this town without everyone knowing what color it is.” - Lou

Stone has to go back for the pig after Lou mentions it. The pig going to him saved it from slaughter.

Butcher: “Not unless it’s wrapped around a stack of cash.”

Stone barters some time carving meat to get the pig back.

Bona fide small-town atmosphere is the result of generations of people who have lived by the demanding natural rules of their place. The elements of small-town quality are natural and man-made beauty, stable economy, strong community, low population density—and time. Only in low-density beautiful, natural places is the human spirit preserved and nourished. Compacting people causes certain social disease. Again—never forget—all cities once were villages.

I take from that a simple idea—of course small towns are simpler, more stable, more natural, because the growth of such a place, in size and population comes hand in hand with transforming from the quiet, peaceful place, to something approximating a place with those “problematic issues” of sex and violence Davies (1995) suggests are deliberately mentioned in the opening scene of Groundhog Day. I don’t totally buy into Davies’ ideas about Groundhog Day, but clearly the cinematic small town is far from the usual violence. Violence in a small town is more personal when it’s present. Hell, everything about the small town, inevitably becomes personal, when the horrors of the big city are impersonal. Maybe that’s why the small town appeals to us—even if we might not want to admit it—the urban and even the suburban environment is so impersonal that the individual gets lost in the mix, working in a cubicle maybe. But, in the small town, your job matters, and you affect other individual lives directly. But, that isn’t necessarily a positive thing. While one might be able to “fan the flames” of a local girl’s passion for her fiancé, negative acts have effects as well. GeRue writes:

Being known cuts both ways, just as anonymity does. GeRue quotes Will Rogers: “So live that you wouldn’t be ashamed to sell the family parrot to the town gossip.”

Personally, I like the small town... to an extent. My visit to Woodstock six months ago—I liked that there were familiar individuals I’d see around town, that in a matter of days, I got to know a bit about some of them and missed the place after. When I lived in Arkansas for a few months a decade and a half ago, my front door opened on woods; it was barely even a town I lived in, though there was a bigger town within a good walking distance. My personal life there didn’t work out so well, and some of the right-wing tendencies of some of the locals didn’t sit well with my California liberal ways. But, I liked the place, I liked that if you walked down the road you’d pass relatives’ and friends’ houses, I liked that at the local employment office you’d run into old friends from high school. I only run into old friends from high school on Facebook. I have to drive to get to relatives’ houses.

I guess I romanticize the small town as well. I like the idea of Groundhog Day or Doc Hollywood or Cars or the down-home interconnectedness of The Straight Story or Nebraska or... whatever else small-town movies I’ve seen over the years.

With the internet, the opportunities in the big city don’t even seem all that exclusive anymore. I’m primarily referring to movies, of course, because that’s my thing. I don’t want to leave Los Angeles, but I’m sure I’d like to visit some smaller towns in the future.

Today’s reason to repeat a day forever: to get out of the big city... then to come back all over again.