and you'd be an expert

Day 363 seems, to me, like a perfectly reasonable recap number. Consider: I recapped on Day 62. That is hardly a good, obvious, round number. Day 60—that would make sense, but that day, I was busy nitpicking Maggie Crane of Woodstock, IL. And, now I’ve namechecked her again, which is not only rude but, well, somewhat pre-loop Phil Connorsian—

Anyway, I recapped again on Day 121. Again, not a good, obvious, round number. Day 120 would have made more sense, but I was busy tying impromptu quotations to Groundhog Day.

Day 301: you never talk about work was a sort of behind-the-scenes look at the research—deliberate and more casual—that goes into this blog.

Day 302: what high school did you go to? deals with the short film, The Other Side of Yesterday before moving on to the high school lives of the likes of Phil Connors, Rita Hanson and Larry… whatever Larry’s last name might be.

Day 303: play it ‘til the bitter end is a confused little piece that involves old poetry and an old novel of mine, and The Game of Life.

Day 305: closing the road is probably my final obsession about locations in the movie. Alas, I still am not sure where they filmed much of the chase scene after Phil steals the groundhog.

Day 306: you get your sleep deals with dreaming and false awakening.

Day 307: up next: entertainment editor breaks down the opening credits of Groundhog Day.

Day 309: what are you dying of? is my first brush with Edge of Tomorrow. Day 310: doubly dying shall go down is me framing Edge of Tomorrow’s hero in terms of the Kozlovic scale of Christ-Figuring. I return to Edge of Tomorrow again in Day 350: why couldn’t i get that day?.

Day 311: to the vile dust drifts into a non-time loop (and non-timey wimey at all) movie, The Fault in Our Stars to make a point about, you know, life and love, and good happiness stuff.

(If you know where that last phrase comes from, good for you.)

Day 312: but i think is brief, oh so brief, the calm before the storm of summer break perhaps.

Day 314: the same. that’s my favorite drink is a shallow use of Howard Giles’ Communication Accommodation Theory applied to Groundhog Day.

Day 315: the end of a very long day involves Phil telling Rita about the time loop after the movie has ended.

Day 317: i’m not easily amazed is me picking on Rita with four different YouTube videos.

Day 318: a large squirrel predicting the weather is all about my student/friend Tracey watching the movie for the first time. For the record, Victor was also there, but he fell asleep at one point and had nothing interesting to say afterward.

Day 319: hello, father deals a bit with the Old Man (O’Reilly) and a scene from the original screenplay involving a priest.

Day 320: you must really enjoy it is a weird sort of transition from the topic of O’Reilly to Harold Ramis’ third revision of the screenplay for Groundhog Day…

But, I don’t get to that screenplay in Day 321: i thought you were supposed to disappear because I’m watching some more Tru Calling.

Day 326: you gotta check your mirrors, Day 330: we could do it again sometime, Day 331: the ticket for you (which also includes some of my final thoughts on Paul Hannam’s The Magic of Groundhog Day), Day 332: you think i’m acting like this…, Day 334: he’s gonna swerve first and Day 335: is that not good? deal with Tru Calling, while Day 327: how much longer… backtracks into other Time Loop TV with Seven Days and Fringe.

Day 328: …do I have to sit here? is about a rock. Seriously, a rock… and therapy and the speech team for which I coach and life and, of course, Groundhog Day.

Day 329: if it’s not too boring has got to be the shortest entry of this entire project.

Day 333: because i’m egocentric is an update involving a cookie, a party and a prospectus. 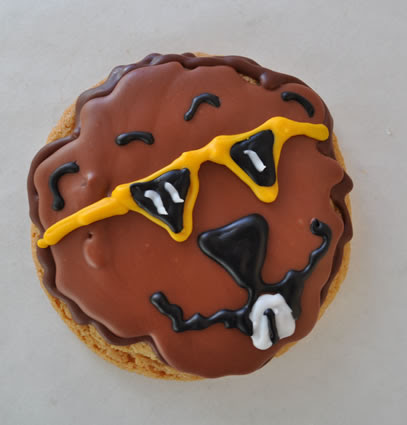 Do you notice a trend here? At this point, I was deliberately trying to move away from Groundhog Day.

But then, Day 340: i’m sure i can think of something instead avoids the six Time Loop TV episodes I rewatched that day, to consider the idea of how this blog might be connecting me with others (a topic I may revisit tomorrow).

Day 341: i can’t wait to do this with my own children mostly involves my 11-year-old daughter’s thoughts on Groundhog Day and this project of mine. Also, here, I invite all of you to submit your thoughts on either the film or this project for me to share with everyone on Day 365; just email them to robertegblack@hotmail.com.

Day 342: even though it’s just pretend reveals some of the work going into Groundhog Day: The Board Game. This continues in Day 344: tiny village in western pennsylvania and Day 345: by the rules.

Day 343: this big mass coming out of the north deals with the movie Timecrimes, Day 348: among the people with the movie Blind Chance… and books, Day Day 349: can i have a rain check with Once (the Musical more than the movie, but really just as a launching point for a brief bit about life and being positive about it), Day 351: you don’t remember me with a forgotten Bill Murray movie called Nothing Lasts Forever, Day 352: every morning i wake up without a scratch on me with Mr. Nobody, Day 354: small town people are more real with Doc Hollywood, Day 355: the world is about to explode with Source Code.

Day 347: where have you been? deals with games and timing.

Day 353: you seem like the most popular person in town deals with an episode of Community and the butterfly effect.

Day 357: are you trying to make me look like a fool deals in the holy fool, the Shakespearean fool, and the role of a) Ralph and Gus for Phil, b) Phil for all of us in the audience. Day 358: he must have just snapped! continues on this vein with the yuordivy and the Tarot’s Fool.

In Day 359: we know that winter, I finally get to Chekhov, realizing that his plays are mostly not as bleak as Phil makes out.

Day 360: but why are you still here? deals with the movie Boyhood and things we want to happen in our movies, even when they don’t make logical sense… like Rita and Phil ending up together, for example.

Day 361: this is bill is me dealing with the worst of Bill Murray and wondering if that changes the best.

Day 362: four to five hours a day is mostly photos of my LEGO Gobbler’s Knob.

Day 364: i, for one, am very grateful to have been here contains my final thoughts on Groundhog Day and this project and what it has meant for me to have done all this.

Day 365: so this will be the last time we do the groundhog together recaps the Day 365 party and shares the thoughts of others—family members, friends, and those I have come to know along the way doing this project.

Today’s reason to repeat a day forever: (I may have used something like this before) to categorize every day of real life and give it a title.