you don't want to rush back

A few notes and that is all for today.

That New York Times article I mentioned a good while ago—reporter I talked to in Woodstock in February—that isn’t happening. I don’t know if I should share details, but the article is supposed to happen, different publication and probably not until winter (think Groundhog Day-ish).

Another thing I currently am feeling I should keep details under wraps… someone who is in Groundhog Day sent me a message today in response to a message I wrote about the Day 365 Party next week. On a long shot, I asked if he would attend or send a message to those who do. The conversation is ongoing.

More publically, the Overview with Rick Overton, AKA Ralph in Groundhog Day, now follows the Groundhog Day Project on Twitter. I feel the need to write about Ralph now. But not today. It has been a long day.

Borrowed a projector for the Day 365 Party, by the way, and this evening I watched Groundhog Day projected onto the wall of the living room. While I could not actually work on this blog at the time—it was my iPad wired into the projector—I actually wasn’t feeling the urge to do so anyway, with the bigger “screen” going on. It felt more like a movie, which Groundhog Day really hasn’t since I saw it on the big screen in Woodstock, February 1st and 2nd.

And, I noticed something I hadn’t noticed before. It wasn’t anything important or worthy of lengthy discussion, but I thought it was interesting that there are still things to see. What was it? The following will be a letdown.

Seriously, this is not a big thing I have noticed today.

I noticed before that the Tip Top “Chef”—presumably Doris’ brother Carl—is visible just standing around in the background of the scene where Phil’s feeding the Old Man. This scene: 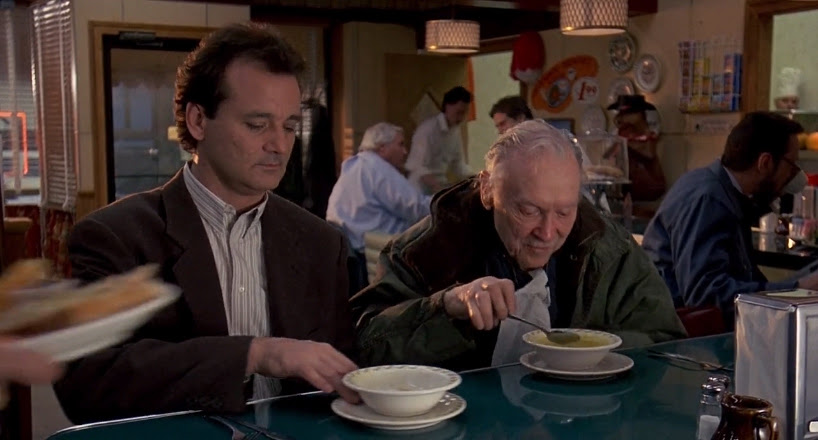 This is not the new thing.

The new thing is the waiter coming out of the door of the kitchen—it’s the waiter who drops the tray.

I told you it wasn’t big.

Anyway, that is all for today. Tomorrow, something more interesting… maybe.

Today’s reason to repeat a day forever: to write more.