so, what do you want out of life, anyway?

“There was a time in my life not so long ago, that I experienced a moment that could only be described as pure love and happiness. It was as if love and happiness were finally real to me and were something tangible, embodied in that moment. They were in everything I could hear, touch, taste and smell. I could see them with my very eyes—reflected back at me in someone else’s. They were all around me, breathing life into me, as if wrapping me up in a divine blanket.

And in that moment I caught a glimpse of something. A parallel universe—a way things could have been. An alternate reality where that love and happiness were mine to keep, a place where I didn’t have to let them go.

I only hope that one day… many years from now when I am an old lady and I close my eyes for the last time—I will open them again and find myself there.”

Six minutes into Sliding Doors, we have our setup: two alternate realities. Helen (Gwyneth Paltrow) has been sacked from her PR job and heads for the tube, where she both just barely catches and just barely misses her train. Below, we’ll call these two realities ON and OFF. 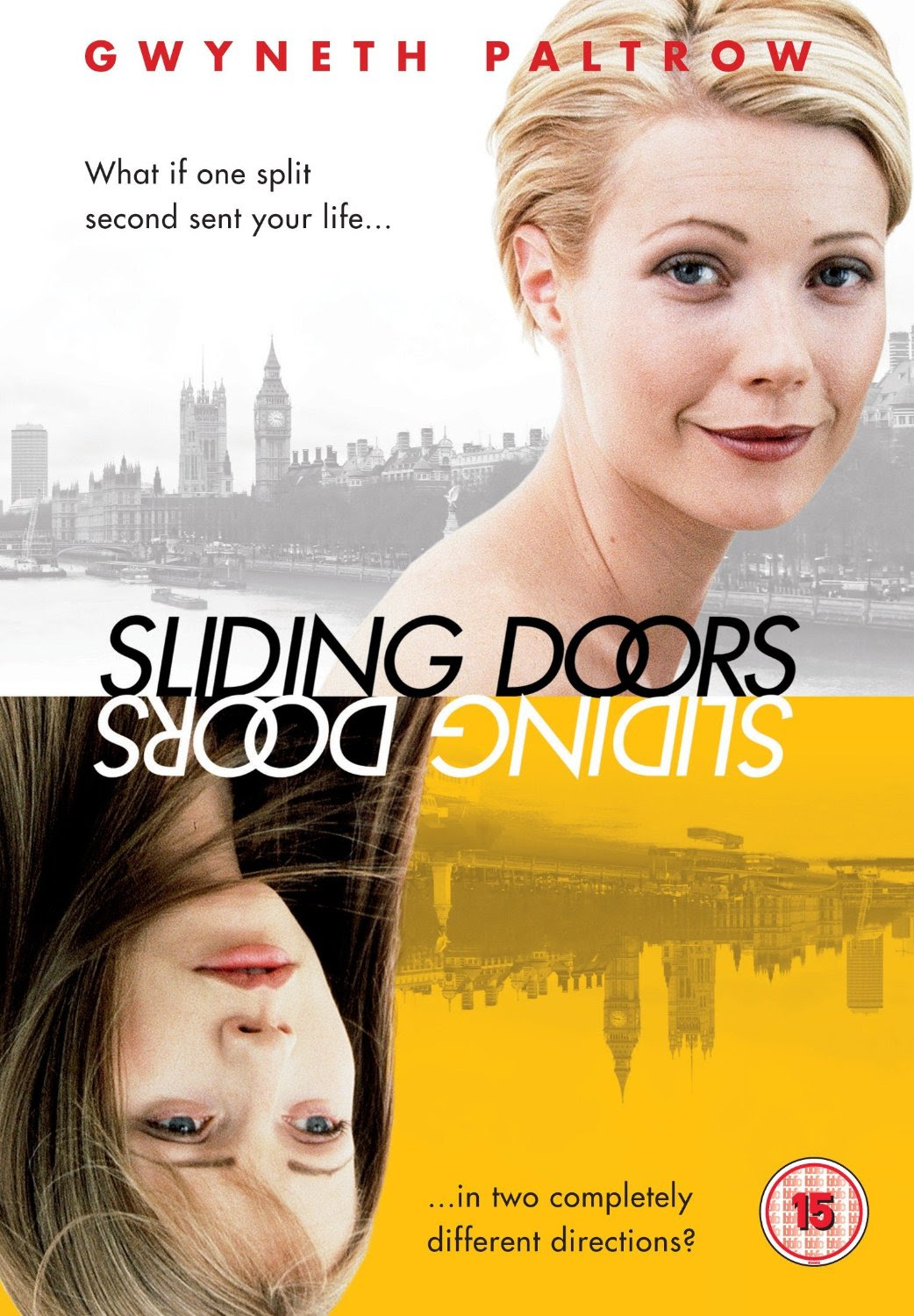 Helen: What, "Always look on the bright side of life"?

James: No. "Nobody expects the Spanish Inquisition."

The quotation above implies imagination more than an actual alternate reality, but Sliding Doors deals in alternate realities. I’ve written before about some of the alternate realities created in Groundhog Day. Each choice, each minute detail, just like in Run Lola Run, makes an entirely different future. Sliding Doors explores two paths for Helen. That one train twists reality... or untwists it, I suppose, separating out the possibilities.

ON, Helen drinks alone at a bar and James shows up with his friend Clive. OFF, Helen drinks at that bar with Jerry. There’s a nice interplay of the two realities in this scene, as it shifts between them on the reverse angle shots. Both Helens get carried to bed drunk, ON by her best friend, OFF by Jerry.

OFF, Helen gets a job as a waitress, while ON, Helen gets made over to, well, make it a lot easier to follow the two realities for the rest of the movie. ON Helen now has short blonde hair while OFF retains her longer, darker hair.

When ON Helen considers starting her own PR firm, James tells her, “Hey, you know everything happens for the best. You’ll never know if you don’t try.” He’s an optimist, of course, and a believer in... fate? Destiny? That eventually the good outcome will happen. This film has a way—I have seen it before, so I know where it’s going—of twisting that possibility so that bad outcomes and good outcomes move together. In movies, we certainly like it when good things happen—to the characters we like, anyway. And, we sure would like it if life happened so that only the good outcomes happen, but it’s never as cut-and-dried as that. Bad things happen. Relationships fail. We get sacked from jobs. We get sick. We die. There is always room for bad as well as good. This film implies… Well, let’s save that until the end.

OFF Helen is miserable and James almost tells her about his affair, but Helen falls asleep in his lap.

ON Helen goes out on the river for a boat race James is in. Meanwhile, OFF Helen walks along the river and she tells her friend, “It’s really weird. I knew there’d be a boat race going by with purple and white shirts." The two realities bleeding together a little.

James tells Helen an amusing story—his whole life, he says, “pivots” around a girl called Pamela leaving him when he was 8. It’s just the endearing thing to finally get Helen to kiss him, but it also makes an interesting point, though he is kidding, about how the past can affect the present.

ON Helen helps James’ friend Clive open his new restaurant and Jerry shows up at the opening. Helen talk to Jerry and Jerry kissed Helen (James sees this and leaves) and ON Helen feels faint. At that same moment, OFF Helen feels faint at work.

OFF Helen tells Jerry about her fainting while he is on a research trip (secretly) with Lydia. Helen’s pregnant. Lydia, on the other hand, leaves Jerry. Meanwhile at work, Helen sees a couple arguing because the man has bought flowers out of nowhere and the woman assumes he’s cheating on her. Helen goes home to Jerry... and flowers.

ON Helen talks to Jerry and Lydia calls. She is also pregnant.

OFF, Lydia really needs to talk to Jerry.

ON Helen meets up with James again. He didn’t call because—being too nice—he thought she needed to deal with Jerry and he wanted to let her do that.

Annoying bit where the movie deliberately tries to mislead the audience. After James and Helen part, he kisses another woman. Reminds me of my least favorite episode of Lost - “Ji Yeon” - which deliberately presents scenes in a way to force the audience to think one thing is happening when something else is.

Meanwhile, ON Helen is also pregnant. She goes to tell James, and finds out he’s gone to “visit his mother in hospital with his wife.” More of that misleading. Just had to make us think James couldn’t be as good as he seems.

Now, it’s not entirely misleading, of course. It is (or was) his wife. They’re playing like they’re still together for his ailing mother. I can relate, of course, to not wanting to tell people you’re still married when you’re separated and working on divorce. Plus, Helen kept insisting that she and James wouldn’t get together seriously because she was “on the rebound.” Then, it was within days of their sleeping together that James saw Jerry kiss her and they didn’t see each other for a while; I’m not sure there was a good time for him to mention it, really.

Got distracted just watching the end of the movie, but in brief, here’s how it goes. OFF Helen is confronted with both Jerry’s affair with Lydia and Lydia being pregnant, leaves in a hurry, and falls down the stairs. ON Helen after James has explained things and everything seems okay, gets hit by a lorry. Two ambulances converge on the same hospital, two Helens lose their babies, and both Jerry and James respond relatively the same, worrying about Helen even though neither knew that Helen was pregnant.

ON Helen dies after James sits beside her and tells her,

Helen, for some reason, I know you can hear me. I'm glad we got things sorted out tonight. I'm glad you caught the train that day. I am going to make you so happy. I promise.

OFF Helen wakes and, after Jerry offers to do whatever she wants, tells him, “stand up, walk over to the door, open it, walk through it, and close it behind you.” The song playing in the background suggests Helen has “grown up,” that “She’ll be streetwise to the lies and the jive talk.” And then the background song gets to be just a little too on-the-nose with the lyric, “She’s gonna find true love.” The only remaining Helen now meets James in the lift. “Cheer up,” he tells her. “You know what the Monty Python boys say.” Though this Helen shouldn’t know the answer for James, she says it: “Nobody expects the Spanish Inquisition.”

I started above to say what this film implies, and here it is: that bad things happening to us make us stronger people. The problem here is that bad things really happened to both Helens. The timing was just different, so it is hard, really, to say what the film wants us to think specifically about causality. Maybe the two realities is just a gimmick. Maybe the ending is just a way to end on the meet cute high note rather than have James and Helen getting back together after the manufactured third act twist of his marriage be the end of the story. The story of James and Helen before was cute, but maybe we’re suppose to think Helen hadn’t earned it.

I, of course, have a problem with the idea that we earn a good relationship by anything but work within the relationship. Chance meeting is just chance meeting. As Phil Connors learns, it takes actual effort and genuine feelings and change to earn something good. Not just a string of bad things saving you up some karmic points, or however you want to describe OFF Helen’s story.

Today’s reason to repeat a day forever: to expect the Spanish Inquisition, I suppose. To be ready for anything…

Also: to be different versions of myself on alternating days for a while, just to play with reality a bit.