this big mass coming out of the north

The time loop in Timecrimes (Los Cronocrimenes) is different from the one in Groundhog Day.

Oh, just watched the former and the latter is on now. 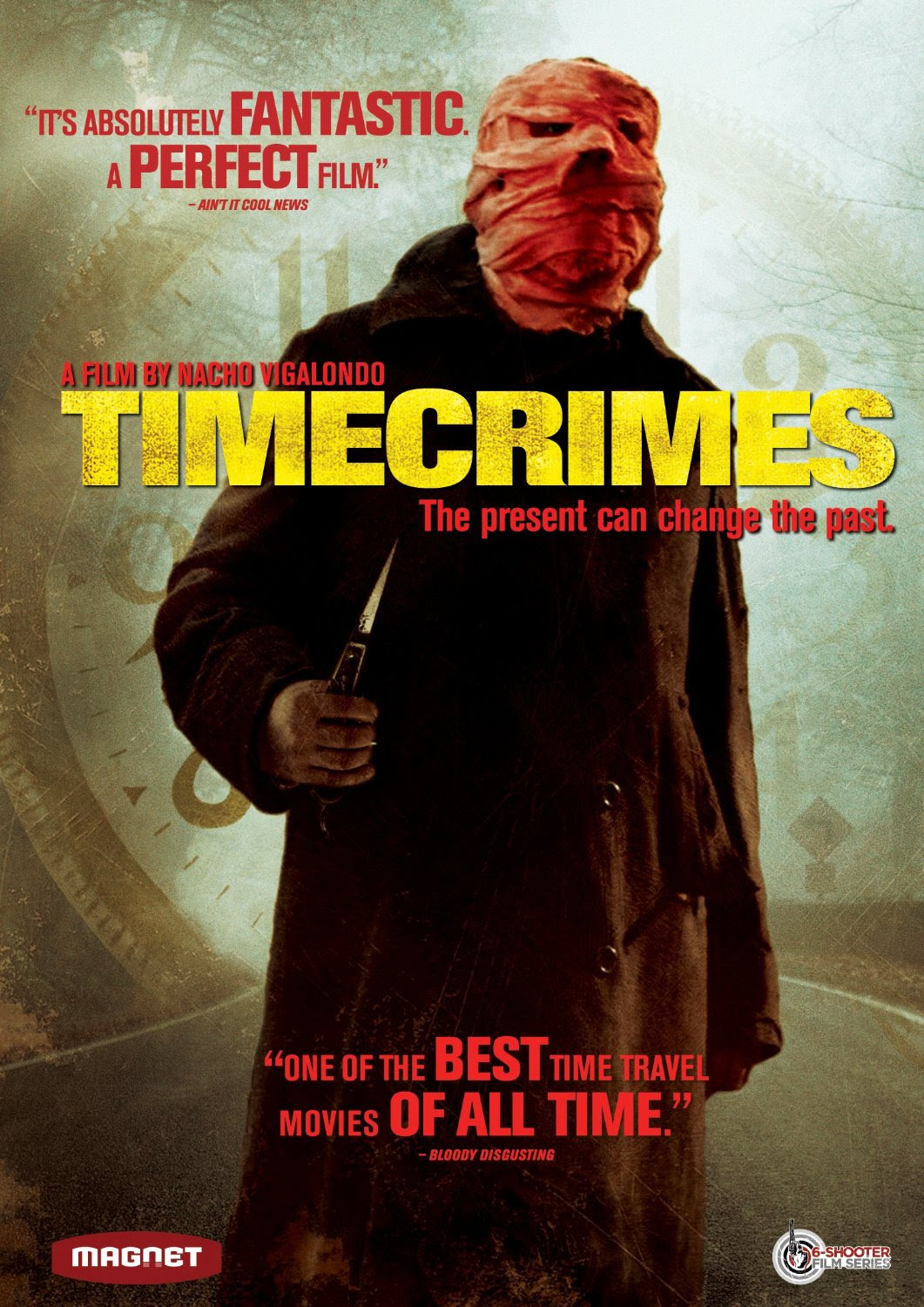 Let me back up a bit. Assume SPOILERS. And, watch Timecrimes anyway, if you want to, because knowing what’s going to happen won’t ruin the story. That’s kind of the point.

The basic gist: Hector (Karra Elejalde) gets himself into a bit of a situation after spying a topless girl in the woods near his house. He finds himself in what turns out to be a time machine, heading about an hour and half back in time, only to be (arguably) stuck interacting with his past self in the same manner a stranger with a bandaged head interacted with him before. Stranger is himself an hour and half in the future come back in time, of course. Then, a second go in the time machine leaves a (third) Hector trying to stop Hector 2 but, of course, interacting instead with him in a way that fits exactly with what we have already seen, though we (and he) may not have realized quite what was happening the first (second?) time.

That complicates it too much. Hector re-experiences the same hour and half (or so) three times, exercising his agency only inasmuch as he is committing acts he has already experiences himself committing. The IMDb board on this film amuses me because I don’t think it’s all that complicated. For example, one guy asks why Hector 3 doesn’t just kill Hector 1 or Hector 2 to stop the bad part of the loop from happening. The (seemingly) complicated answer: because he is predestined to commit the acts he has already committed even if he is experiencing them from a new perspective because what has become past is now once again present. The simple answer: he’d be dead, moron.

Phil Connors has a much simpler time loop, though. We can all understand it. That’s why the likes of Groundhog Day can be a classic, oft rewatched film and those who have seen Timecrimes probably don’t rewatch it much. Well, the simplicity and something else—Phil Connors starts out a jerk and becomes a better person while Hector (seemingly) starts out a nice(-ish) guy and becomes more of a jerk (if you can include deliberately setting up a woman to die under the jerk label, that is) along the way. But, Phil’s simpler loop—there is no duplicate Phil when Phil 1 is transported back to the morning of February 2—makes for a more palatable film for a wider audience.

I’ve talked about Danny Rubin’s original screenplay before. His version, similarly, would have worked for a narrower audience than the film we all know and love. The wider audience needs a good setup; we don’t need explanation (obviously*) but we want to see the entrance into the high concept reality even if we don’t get to understand it. Since a film version of Rubin’s original is just a hypothetical construct, this is conjecture, but I think one of the best things that happened to Groundhog Day, in terms of its success, was the addition of that first February 2 (February 1 is not as necessary, but it’s nice, too). We need to be spoonfed just a little for a film to really be liked. We, being a wide audience. I am not a wide audience, though, and something I particularly enjoyed about Timecrimes is that not only does Hector 2 do exactly what he expects that he should and Hector 3 inadvertently (at first) do what has already been done, Hector 1 effectively gets into the entire situation purely by happenstance. There is explanation for the situation in terms of the time machine, but there is no real reason Hector should be there at all. Hell, Hector 1 only wanders into the woods because he saw the topless girl who, it turns out, was only topless because Hector 2 told her to take off her top, because that is what he knows happened. It’s realistic use of time travel. Cause and effect cannot be in the usual order, but they are still there.

Meanwhile, there was an * up there because it is not that we don’t need an explanation, it’s that we sort of provide our own. We don’t need to believe God causes Phil’s resumptions to assume a purpose. Assuming a purpose is part of the human condition, to an extent, and, in this case, the fact that Phil Connors starts out a jerk and turns into a better man—that’s enough of a purpose for us. The conscious effort of God or a god, or the unconscious (non-conscious might be the better term) effect of the universe correcting itself—It doesn’t make a difference anymore than having a reason Jack ended up with those particular beans on that particular day and so he heads up that beanstalk and ends up killing that giant and getting rich off that goose (or however the particular iteration of that story that you know goes). The point to a story—any story—is not that all of its elements necessarily fit with some exact reason but that the reason we can invent after the fact explains away the events depicted in the story.

Or something like that. It’s my roundabout way of suggesting the ridiculousness of religion, but I don’t expect the religious reader to agree with me. The explanation we come up with, beforehand or after the fact—it trumps the argument of some stranger writing some silly blog.

Nevermind all that. Simply put, it is not Phil’s fate to be a better man. It is the result of a long number of days in Punxsutawney, through which he figures out that his old methodology was flawed and there is something better. It doesn’t take a time loop, it doesn’t take a time machine, but when it does, maybe we think it makes more sense because it’s just so damn hard to change in real life.

Or whatever. Day 343 and I’m starting to wonder what the final... argument I want to make is regarding Groundhog Day. What is it I want my readers to take away from this? What do I want people to find when they stumble upon this blog in the future? I want to stick the landing, as it were, to have something profound and meaningful to say, but maybe I’ve already said it all. Hell, maybe I’ve already said everything I will ever need to say about anything. Maybe all that’s left is slightly different repetitions that don’t mean anything at all.

Maybe I need a time machine right now to loop back and write this entry all over again.

Or maybe I already did that.

Today’s reason to repeat a day forever: to figure out what different individuals think is profound and meaningful and present it to them as spontaneously as I can, to be worshipped and adored by person after person after person... and then to get over myself and just live life.