but why are you still here?

Watching Boyhood this morning, and a few times there were things I expected might happen that didn’t. The movie—if you don’t know it—was filmed over 12 years and evokes a sense of real life more than the Hollywood-constructed life. A boy doesn’t turn into a man in a single summer that lends itself easily to film—at least not all the time. It takes years. But, anyway, those moments.

For example, Mason camps out with some other teenager boys at a house under (mostly done) construction and they’re drinking beers and breaking bits of wood, kicking them while another boy holds them. And, they also throw a saw blade into a spare bit of what looks like sheetrock. So, the end of the scene, oldest boy is going to punch a board held by the one kid who doesn’t want to drink, he’s holding it right in front of his face, and that saw blade is in the wall behind him. In a scripted film—especially a Final Destination film—this is a setup for a horrible injury and a lesson learned about going out and drinking underage. But, since this movie evokes reality, or tries to as much as it can, older kid breaks the board, and scene. Going out and drinking when you’re young does not automatically end badly.

This next example is more SPOILERy.

(If you don’t want the SPOILERS, drop down two paragraphs, past the image.)

Mother’s second husband is a belligerent bordering on abusive alcoholic. Mother finally takes her two kids and leaves him, but because she’s not the legal guardian for his two kids, she can’t take them. She called child protective services but we aren’t privy to what happens with them because we are following her and her two kids. Here again we have a setup for a whole other subplot in a scripted film—not a common one, but one that occurred to me maybe because I felt sorry for those other two kids and would actually like to think that, in that situation—which, technically, I couldn’t be in—I would have taken them as well, damn the law. Since the movie involves a jump forward in time here and there, those other two kids could have just been there again later, so we know that the mother managed to do something, but the movie doesn’t have time to take care of that many characters as it keeps moving ahead.

This one is also SPOILERy since it concerns the very end of the movie. That alcoholic husband makes Mason cut his long hair off at one point and Mason goes to school with a buzzcut and kids laugh at him. But one girl, Nicole, passes a note to him—she thinks his hair looks “kewl.” Years pass, girlfriends come and go, and on his first day at his college dorm, Mason meets a girl named Nicole. She may or may not be the same girl—an IMDb thread suggest it is, indeed, the same girl playing both Nicoles—but the movie does not make any point of suggesting it is the same girl. A scripted film might make a big point of it, like it’s fate and Mason and Nicole are meant to be. At least two people on IMDb say her presence means just that. And… 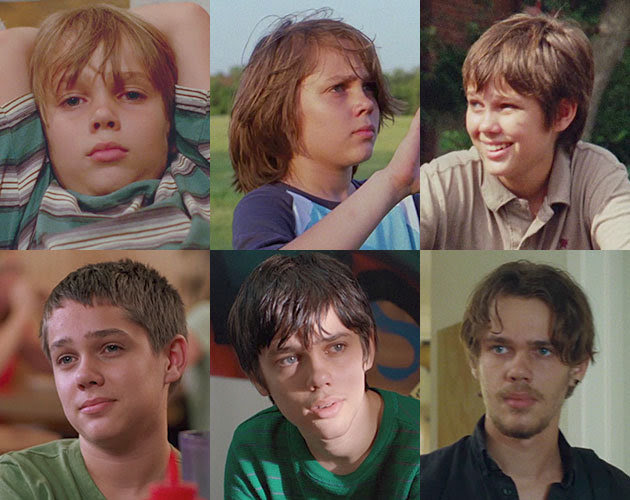 …the thing is in real life, nothing is meant to be. You run into an old friend, it’s a nice coincidence, it isn’t fate. If you happen to end up in a romantic relationship with a childhood friend or your high school sweetheart, even after time away from each other—and for those who skipped the SPOILERy paragraphs, I am not saying that is what happened in Boyhood—that still does not make it fate or destiny. It does maybe make it a little poetic, and that’s why we like that sort of things in movies. We want things to wrap up nicely. We want coincidences to bear meaning, for young love to have the potential for true love down the line. Even in a movie like Boyhood that insists on something more like reality, we want Nicole to be Nicole, because… poetry.

Similarly—and this segue was entirely planned—we want Phil to end up with Rita not because it makes logical sense but because Phil deserves something good, and however much we might like or dislike Rita—

—Phil clearly likes (or at least liked) her. So, Rita is a worthy sort of—and this is horribly sexist to say—trophy for Phil having bettered himself. It’s like a basic human condition to think if we do good things, if we be good people, we deserve happiness and a good love interest and success in school and career. There’s an amazing detail in Boyhood—has nothing to do with the story so I won’t SPOIL-tag it—though the mother manages to go back to college and get her bachelor’s and then her master’s degree and get a good teaching job, the family still is always just barely getting by, because one success is not necessarily the equivalent of another, especially financially.

Phil’s success is mostly inside him. He’s learned to care about other people, even strangers he used to loathe. He’s learned to appreciate finer things like just sitting around reading a book. He’s learned to play the piano. And, while he demonstrates these improvements visually, we want there still to be some more obvious result. And we get it in the form of two things: the end of the time loop and Rita’s acceptance (and presumed love, because in Hollywood, love comes that easily… for her; it’s clearly not easy for him).

When the piano teacher is proud of her student who we can see is obviously advanced beyond her teaching skills, we don’t wonder if maybe Phil told her all about the time loop and she knows she’s actually been teaching Phil step by step (from his perspective), and we also don’t immediately question it. We maybe think it a little odd, but we run with it. Similarly, there is no reason for Doris or Nancy to necessarily know who Phil is on that last day of the time loop, let alone be so enamored with him as to battle over him in a bidding war in the bachelor auction; seriously, he presumably has not had time to hang out at the Tip Top or go on a date with Nancy—hell, if he had done the latter, that would put a crimp in our subconscious plans for Phil and Rita to end up together. But, we have come to appreciate what Phil has become, so we take the people of Punxsutawney as our proxy, appreciating him, thanking him, bidding on him in our stead. Essentially, we want the much-improved Phil Connors, so internal reality be damned, they can all love and appreciate him as much as they like.

And, Rita can spend the night with him, not just because the peculiarities surrounding him might make for an interesting story, but because Phil has miraculously turned around from a smartass jerk to a wiseass gentleman… For those of us who reached the point of not liking Rita much anymore—a shout out to Kyle Sweeney if he’s still reading, because he knows what I’m talking about, also to my daughter Saer, because she also gets it—maybe the original ending to Rubin’s Groundhog Day in which Rita is now stuck in her own time loop on February 2nd would help these two out in really getting together. She could learn not to insult people using poetry, for example.

My point is, the onscreen story is subservient to the whims of the author and the audience. I am no longer the normal audience.

Today’s reason to repeat a day forever: unlike Rita, to learn to insult people using poetry.